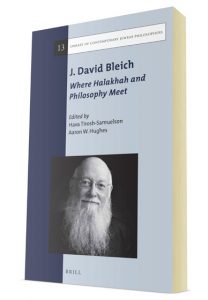 Rabbi J. David Bleich is a leading intellectual figure who serves as a prolific and authoritative scholar of philosophical halachah. I do not think it is an exaggeration to say that while he did not create the genre of English halachah, he defined it and continues to provide the gold standard against which all others are measured. For over forty years, Rav Bleich has proven the intellectual respectability of an unabashed Orthodox Judaism. In the introduction to one of his volumes of Contemporary Halakhic Problems, Rav Bleich tells the story of a professor of medicine who said that the intellectual rigor and excitement of one of Rav Bleich’s books convinced him to become Orthodox. This rings true to me. I remember when I was a teenager exploring the library of my Conservative synagogue, finding inspiration in the confidence and coherence of Contemporary Halakhic Problems.

Rav Bleich has published numerous books on halachah in Hebrew and English. His recent book The Philosophical Quest and his earlier book With Perfect Faith present some of his philosophical work. A new short book, Where Halakhah and Philosophy Meet, part of a series on contemporary Jewish philosophers, shows how Rav Bleich powerfully combines these two areas of expertise, merging them into a sharp comment on contemporary religious politics.

This volume begins with a biographical essay of Rav Bleich, written by Professor Steven Resnicoff, professor of law and co-director of the Center for Jewish Law and Judaic Studies at DePaul University College of Law. Then follow selected essays that show Rav Bleich’s halachah-based philosophical work on topics including the halachic process, medical ethics and natural law. In the final section, Rav Bleich provides reflections on a number of contemporary issues. Here he explains the basic contours of his beliefs and describes the challenges facing the Orthodox Jewish community today. These challenges include anti-intellectualism in halachah, communal boundaries, women’s ritual inclusion and the limits of moral initiation in halachah. This short book showcases Rav Bleich’s amazing career of developing a completely traditional halachah within a modern scholarly framework. 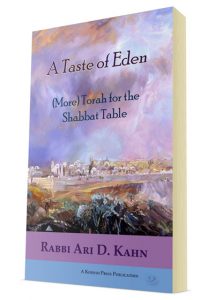 Much of classical rabbinic Torah commentary consists of complex distillation and expansion of midrashic and Talmudic interpretations. Comparing explanations from across the midrashic literature, these commentaries have built vast and intricate theories that shed halachic light on the ancient texts. After erecting these impressive structures, often building on the commentaries that recently preceded them, many commentaries proceed to deduce profound moral and religious lessons. Because of its complexity, this genre delights the Talmud scholar but remains largely off limits to the layman. For years, Rabbi Ari Kahn, the director of foreign student programs at Bar-Ilan University in Israel, where he also is a senior lecturer in Jewish studies, has been engaging in this traditional commentary in English. He has not been popularizing the insights of others but expanding the literature, creating his own insights in English so that a broader audience can understand. However, readers without a strong yeshivah background may find the journey through texts and concepts overwhelming.

In his latest book, Rabbi Kahn takes a further step in broadening the audience of his popular rabbinic Torah commentary. Omitting the hard textual work, he presents short interpretations of the weekly Torah reading that contain the messages and the Biblical insights in a style tailored to the non-specialist. He quotes midrash and Talmud with a light touch, without posing contradictions and proposing reinterpretations, and in a way that directly sheds light on the Biblical passage he is addressing. The reader is left with a taste of the classical rabbinic method. Most remarkably, Rabbi Kahn accomplishes this without short-changing the reader. The brief interpretations are succinct and complete, standing firmly alone without the need for additional study. A Taste of Eden is an attractive presentation of an old method dressed in contemporary language and style.

The precise terms belief and faith, emunah and bitachon, can be distinguished in a variety of ways. Some consider emunah an acceptance of abstract ideas and bitachon an integration of those beliefs into your life. In that sense, Rabbi Chaim Goldberger’s The Six Steps of Bitachon is the best—most practical—book ever published on the subject. Through careful textual study and a lengthy process of trial and error, Rabbi Goldberger has developed a detailed method of utilizing bitachon in practical settings. This book is not a marketing gimmick. It is very practical and eminently usable by anyone, scholar or layperson, righteous or—believe it or not—wicked.

Without giving too much away, I can reveal that the method involves calculating what you need, the maximum effort possible for acquiring it and then your own prescription for achieving it. Along the way, you need to consult with a like-minded friend to ensure you remain within realistic boundaries. Rabbi Goldberger assures us that if you follow the six steps, God will provide what you need—not necessarily what you want, but what you need.

At first I was skeptical but then I realized that overall, this method is a wonderful way to integrate bitachon into your life. Rabbi Goldberger adopts halachic terminology for his approach, referring to a lack of bitachon as a violation of the prohibition against idolatry and certain decisions in the six steps as a form of pesak, halachic ruling. This overreaching is fine in a homiletic sense, as long as it is not taken literally. Additionally, the Torah (Devarim 6:16) forbids testing God. As Ramban (ad loc.) and others explain, God does not want to perform miracles for everyone at every time. The six steps of bitachon seem to come perilously close to testing God.

However, the six steps are a wonderful way to bring God into our daily needs. The Rema writes in the very first paragraph of the Shulchan Aruch that a great principle of Judaism is found in the verse, “I have set God before me constantly” (Tehillim 16:8). When we think about God, we magnify His role in our lives, even in the mundane aspects. While a master of bitachon may not need these six steps, the rest of us can use help in remembering God and truly trusting in Him. This alone is a worthy outcome. Rabbeinu Yonah (Mishlei 3:6) says that the reward for bitachon is much greater than whatever physical need we are pursuing. Rabbeinu Bachya Ben Asher (Kad HaKemach [Jerusalem, 1970], p. 73) adds that even if God does not fulfill our specific need, we still have this reward for our bitachon. Therefore, whether or not these six steps work in satisfying our needs, they accomplish something even greater by bringing bitachon into our lives. 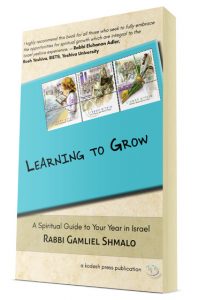 Learning to Grow: A Spiritual Guide to Your Year in Israel
By Gamliel Shmalo
Kodesh Press
New York, 2016 • 366 pages

Rabbi Gamliel Shmalo’s Learning To Grow is billed as “a spiritual guide to your year in Israel” but do not be fooled. This book is a guide to a meaningful life regardless of your circumstances. The structure of the book revolves around the progression of the year in Israel, from the initial flight to the return home. This framework, in addition to the occasional expert tip on living in the country, makes the book uniquely valuable to someone attending a gap year Israel program. However, the vast majority of the book consists of important guidance to anyone looking to grow.

Rabbi Shmalo, who teaches Jewish philosophy and law at Yeshiva University and serves as educational director of Meor NYU, offers a light mussar touch to the year in Israel. For most students, the year after high school is one of challenge and maturation. Reaching an age of adulthood, living in a new environment, studying with a newfound independence, receiving influence from unique personalities—everything about the year speaks growth. Students need to evolve responsibly, focusing on the most important aspects and proceeding steadily. Lasting change comes slowly and thoughtfully, with a careful plan. Focusing on oneself can lead to narcissistic religious change, which is both wrong and unstable. True religious growth requires concern for others.

However, we all need to improve our behavior, not just the yeshivah student in Israel. We all can improve our prayer, better control our appetites, reflect on our daily successes and failures. Every Jew needs to focus on the themes Rabbi Shmalo addresses: listening to wise authority figures while resisting controlling personalities; developing oneself both emotionally and intellectually and making a Kiddush Hashem. Rabbi Shmalo teaches every adult how to live a more purposeful and committed Jewish life without taking drastic measures. If we improve our various religious devotions even a little, we transform our lives. Little steps add up to cover a lot of ground.