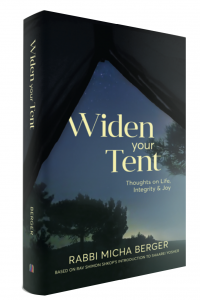 Widen Your Tent: Thoughts on Life, Integrity & Joy
Rabbi Shimon Shkop was one of the great roshei yeshivah of Europe. A student of Rabbi Chaim Soloveitchik, he had a brilliant mind and clarity of expression that left a lasting impression in yeshivah study halls. When Reb Shimon’s yeshivah was forced to close during World War I, he wrote a two-volume sefer titled Sha’arei Yosher on the most difficult subjects in Jewish monetary law. This sefer incisively and insightfully explains the views of great halachic authorities throughout the ages, using Reb Shimon’s conceptual approach, a uniquely philosophical variant of his teacher’s Brisker method.

Sha’arei Yosher, now a staple of yeshivah libraries, contains an often overlooked introduction analyzing the commandment to be holy: “Be holy, for I am holy” (Lev. 19:2). What does God’s holiness have to do with our attempts to be holy people? How do we achieve this daunting task? Reb Shimon offers a characteristically unique and brilliant approach to answering these questions. According to Reb Shimon, the commandment to become holy “includes the entire foundation and root of the purpose of our lives.”

In Widen Your Tent, Rabbi Micha Berger translates this introduction and provides a lengthy expansion and commentary on Reb Shimon’s ideas so that contemporary readers can understand the full context and scope of Reb Shimon’s ethical project. To Reb Shimon, holiness lies not in withdrawal from society and worldly pleasures, but in active involvement in community. If every single act in our lives is dedicated either directly or indirectly to helping others, we will be set apart—holy, as God is holy.

This attitude does not limit the relevance of ritual commandments or focus on the self. Rabbi Berger invokes the teachings of Rabbi Samson Raphael Hirsch, Rabbi Shlomo Wolbe and many others to explain Reb Shimon’s approach to mitzvot and musar. In this book—full of Talmudic examples and conceptual explanations, comfortable to yeshivah students yet accessible to novices—Rabbi Berger details a complete worldview built on determined self-improvement, dedication to excellence in Torah learning and devotion to communal service. Widen Your Tent excites the intellect while challenging the reader to become a better Jew. 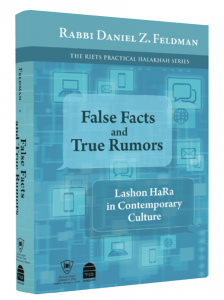 False Facts and True Rumors
Technological advances lie all around us in nearly every aspect of our lives. Perhaps more than other aspects, our methods of communication are wrapped tightly with new technologies. For good reasons, rabbis generally find themselves playing catch-up on the ethical implications of new developments. But they must provide guidance on these elemental parts of our daily lives.

Leading the way, Rabbi Daniel Z. Feldman, a rosh yeshivah at the Rabbi Isaac Elchanan Theological Seminary at Yeshiva University, generated a breakthrough in halachic literature to fill this vacuum. Using his vast breadth of knowledge in the gamut of Torah genres, and thorough research of sociological literature on the subject, he presents a conceptual view of lashon hara, forbidden speech, that explains how people communicate today and what Jewish law and ethics have to say about it. Section headings include: “The Fallibility of Memory,” “The Illusion of Confidence,” “Confidence Biases and Disproportionate Influence,” “Confirmation Bias,” “The Online Disinhibition Effect” and more. Combining Jewish law and an understanding of contemporary social interaction, this is one of the most important books on Jewish speech available today, showing not just how to apply the laws, but why they are more relevant now than ever.

People are quick to point out that the laws of lashon hara can be abused to stifle constructive criticism. Indeed, despite the severity of sinful lashon hara, a modern society cannot function without open lines of communication. How can we vote without knowing about the candidate? How can we choose a school for our children without knowing the relative quality of education in different schools? In a chapter titled “Contemporary Culture: Journalism, the Internet and Politics,” Rabbi Feldman explores the implications of his opening remarks that, on the one hand, “to become informed and to inform others regarding these areas, especially in a democratic society, seems to be well within the bounds of purposeful and necessary speech.” But on the other hand, “this justification does not detract from the vigilance and sensitivity required by the precepts involving lashon hara.” The existence of permitted negative speech does not permit all negative speech. The Internet age does not permit lashon hara but demands proper understanding and application.

This is one of the most important books on Jewish speech available today. 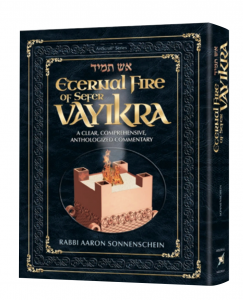 Eternal Fire of Sefer Vayikra
The Book of Vayikra is an intimidating course of study with its discussion of a wide variety of sacrifices, impurities and laws of holiness. We can’t really relate to these laws that have not been observed for two thousand years. Some of us are confused by the different terms and concepts when they appear in the weekly Torah reading. Instead of gaining an understanding of the overall picture, we focus on key verses and phrases for which we find clever or inspirational interpretations. In other words, we give up on truly understanding the Book of Vayikra.

Rabbi Aaron Sonnenschein has produced a remarkable commentary designed to teach Vayikra to the layman. He collected the peshat commentaries for translating the verse and supplemented them with halachic background and detail. In this way, the reader learns not just the meaning of the verse but the context of the laws. Vayikra should not be an obscure book. At one point in time, these laws were implemented and almost anyone visiting Jerusalem could see how they were practiced. Although we cannot do that today, Eternal Fire of Sefer Vayikra offers an accessible and organized explanation of what each set of laws entails and how they can be followed.

For example, in the Talmud, we find that the geography of the Temple is very important. Where something occurs in the Temple courtyard—east, north, et cetera—is very significant. However, these terms don’t always appear in an easily recognizable way. When there is a textual cue, Rabbi Sonnenschein explains the implications for where a specific act should take place—such as the slaughtering of a sacrifice, which is done “before Hashem,” meaning in the east courtyard, north of the altar (Vayikra 1:26). Even when there is no textual hint, he explains the procedure so we can visualize the actions and movements of the priests as they performed the service.

The topic of blemishes (nega’im) is particularly difficult to master. The terminology seems like a list of synonyms. Rabbi Sonnenschein divides the topics, defines the terms and summarizes the discussions of medieval and modern halachic authorities.

After completing this work, the reader might not emerge as an expert in the laws related to sacrifices and impurities, but he will have a grasp of the subject.

Eternal Fire demystifies Vayikra by breaking it down into discrete topics, and providing the broader halachic context in accessible language and a pleasant format so the reader can gain an understanding of the most elusive of the Five Books of Moses.