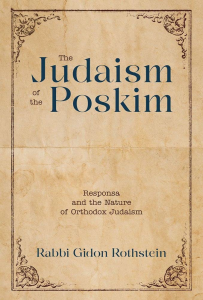 Judaism of the Poskim: Responsa and the Nature of Orthodox Judaism

For over a decade, Rabbi Gidon Rothstein has been on a quest to objectively determine what constitutes the core of Judaism. This is no mere theoretical exercise, but an attempt to judge whether the Jewish community today is focused on the right priorities. If we find that the essence of Judaism is something often overlooked or treated as secondary, we can readjust our sights and reallocate our resources.

Rabbi Rothstein’s first attempt was in his book, We’re Missing the Point: What’s Wrong with the Orthodox Jewish Community and How to Fix It (OU Press, 2012), in which he analyzed the Biblical mitzvot. His latest attempt focuses on the responsa literature, the published letters of leading rabbis answering questions posed to them. On what issues do the posekim (halachic authorities) focus in their responsa? Rabbi Rothstein tried to collect a relatively random sample of responsa from a broad selection of posekim by choosing responsa based on the day of the year. In a project fittingly called “A Responsum a Day,” he taught the topic of a responsum written on that day of the year (these classes were hosted on my Torah Musings website and on OU Torah). He then classified each responsum and analyzed the collective data of the set, searching for the main topics, which presumably consist of the most important parts of Judaism. What he found surprised him.

In his first sample of 384 responsa, Rabbi Rothstein found that the three main issues discussed were marriage, money, and relationships with gentiles. He then took another random sample and found the same issues emphasized, along with Shabbat and holidays. If these represent the most important parts of Judaism, then we should ask ourselves—individually and as a community—how we are doing in following the Torah’s guidance on those issues.

While I greatly enjoyed Rabbi Rothstein’s exploration, I question whether he really found what he was looking for. He mentions many methodological concerns with his approach—e.g., how to choose authors and responsa, which he handles in a variety of ways. He used responsa from, for example, Rabbi Moshe Feinstein, Rabbi Ovadia Yosef and Rabbi Moshe Schreiber (the Chatam Sofer), who are obvious candidates, but at some point, he had to make subjective decisions on whom to include. However, at its very essence, I suspect what we are looking at is not the emphasis of the respondents but of those to whom they are responding. Generally speaking, rabbis write responsa when asked questions. They do not choose their topics; their communities, their correspondents and the times in which they live all influence the choice of the topics. If rabbis write a lot of responsa about divorces, for example, it is not necessarily because they find the subject important, but rather because either there are a lot of people getting divorced or there are unique circumstances that raise complicated questions.

In his fascinating investigation, Rabbi Rothstein found the Judaism of the people who care about what posekim have to say, not necessarily the Judaism of the posekim. But that in itself tells us so much about the lives of Torah-observant Jews, the challenges they face, and the guidance they need. As people who likewise care about what posekim have to say, perhaps this is our Judaism. Regardless of any conclusion that can be drawn from the exercise, Rabbi Rothstein offers a delightful view from a mile high of the responsa literature and its broad themes throughout the ages. 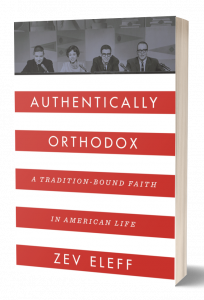 What does it mean to follow   “authentic” Judaism? It cannot mean following the practices of our ancestors, because as times change, practices change also—in small ways and in large. For a minor but very visible example, in many communities in the past only one person said Kaddish at a time, leading to questions over who has priority. There is now a near-universal practice that all mourners recite Kaddish together. Is this practice inauthentic? Most readers of this magazine are Americans with a certain degree of American sensibilities. We live our lives as Americans even while strictly adhering to our religious traditions. If some of our attitudes are distinctly American, is our Orthodox Judaism still authentic?

Rabbi Dr. Zev Eleff explores the meaning of authenticity in Judaism as expressed in the American Orthodox experience. Adherence to halachah is necessary but insufficient. Halachah is a floor, not a determination of the proper path. There exists what Rabbi Dr. Eleff calls “religious sensibilities” that determine what is and is not authentic. For example, an “authentic” Judaism cannot change too quickly, even if halachah allows it, because the sharp discontinuity would undermine the sense of connection with the past. An “authentic” Judaism must preserve the feel of the Jewish experience. Authentic Orthodoxy not only follows the letter and the spirit of the law, but it balances a variety of competing concerns to ensure that the religious experience retains its same quality. Almost by definition, authenticity will vary by time and context. It may also result in disagreements over specific practices and trends.

Taking readers gently in accessible prose through his exhaustive research, Rabbi Dr. Eleff examines nine twentieth-century phenomena that he believes reflect this need for authenticity within Orthodox Judaism. Among these chapters is the history of the kosher supervision (or lack thereof) of various would-be kitniyot on Pesach, such as peanut oil and quinoa. He also traces the development of religious children’s games and toys, such as berachot bees and gedolim cards, modeled after spelling bees and baseball cards. These and other developments reflect the balance between American sensibilities on the one hand and religious sensibilities on the other.

These are not only nine well-told chapters in the history of Orthodox Judaism in America. They are also extended arguments against the simplistic formula that halachah has shifted to the right or to the left, become stricter or more lenient. Rather, Rabbi Dr. Eleff argues, it is an expression of the Orthodox community continually “measuring its religious experiences against various expressions of Americanism.” 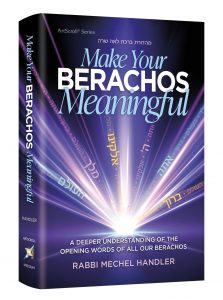 Make Your Berachos Meaningful: A Deeper Understanding of the Opening Words of All Our Berachos

An observant Jew recites at least a hundred blessings every day. How many of us know what we are saying and why? Making Your Berachos Meaningful, in its quest to encourage and empower readers to improve their blessings, explains how reciting blessings properly can change our perspectives on life. Every day in which we recite blessings with kavanah (proper intention or attention) is a day in which we see Divine Providence around us, in which we recognize the bounty we have been granted, in which we realize that life itself is a blessing.

Making Your Berachos Meaningful is a well-organized, easy-to-read collection of a broad variety of sources relating to blessings. The book combines commentary on the meaning of the words of blessings, halachot about the proper way to recite blessings, and stories about the importance of blessings. The book is a broad collection of sources, which as a genre allows for variety and authority but also risks contradiction between different underlying approaches. The book includes lengthy explanation of the meaning of the words of a blessing, including a total of eleven explanations of the meaning of the word “Baruch.” It is hard to know what to intend when some of these explanations are mutually contradictory, even though the author assures us that they are all correct.

The book also includes a large number of inspirational stories about blessings. Some stories describe the great rewards for properly reciting blessings, such as how Rabbi Leib Bakst survived the Holocaust because he followed the Chafetz Chaim’s instruction/blessing to him to recite blessings carefully. In a somewhat different vein, Rabbi Elimelech Biderman tells the story of how a struggling child succeeded in school after his father began reciting the blessings on the Torah carefully. Similarly, Rabbi Yisroel Yaakov Fisher tells the story of a man falsely accused of a crime who prevails in court in the merit of a blessing made with kavanah. Because of the nature and focus of the book, these and other such stories are told uncritically, without questioning the implications raised by these stories. However, the upshot seems to be that if you say your blessings well, you will receive ample reward in this world and the next.

Other stories are meant to scare readers into reciting blessings properly. Rabbi Elchonon Wasserman warns that if, in a time of crisis, you do not improve your religious devotion (here meaning your recitation of blessings), then you are guilty of standing idly by your neighbor’s blood. The Chayei Adam tells the story of an otherwise righteous man who, after his death, went before the heavenly tribunal and was sentenced to Gehinnom after it became clear how many blessings he had recited without proper intent.

Each story on its own is worthwhile, but when compiled together, they risk creating a sense of transactional religion. It seems to imply that we should recite blessings because that is the way to become rich and successful and the way to avoid failure and punishment. Making Your Berachos Meaningful attempts to avoid this mercantile outcome by including many inspirational Torah insights and by guiding readers toward a more profound understanding of how to recite blessings in a proper way. Most importantly, the author tells readers that improvement is not an all-or-nothing proposition. The key is to stop and think before you recite a blessing or do any mitzvah. This brief pause will transform your blessings and everything you do.

Rabbi Gil Student writes frequently on Jewish issues and runs Torahmusings.com. He serves as book editor for Jewish Action and is a member of the Jewish Action Editorial Committee.

1 1 vote
Article Rating
This article was featured in the Fall 2022 issue of Jewish Action.