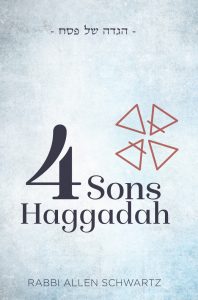 Every year we are blessed with new Haggadah commentaries, offering additional perspectives and insights on the classical text. With so much already said on the subject, it is hard to imagine someone finding an approach that is traditional yet original. Rabbi Allen Schwartz has accomplished this feat with his The 4 Sons Haggadah, in which he presents four commentaries, each intended for a different son.

As readers know, the Haggadah discusses the four sons, traditionally translated as the wise, wicked and simple sons as well as the son who does not know how to ask. Rabbi Schwartz eloquently describes them as the wise, cynical, pure and withdrawn sons. He addresses each son in a running commentary on the text of the Haggadah. The wise son receives answers that show the complex themes and sources of the text. The cynical son learns more about the history of events and the faith issues they touch upon. The pure son is taught inspirational lessons, and the withdrawn son is offered exciting aspects of the story.

For example, regarding the comparison between the attempts by Lavan and Pharaoh to destroy the Jewish people, the wise son learns, among other things, about the use and significance of variants of the word “tzei” (go out) in the Haggadah. The cynical son is taught that G-d saved Yaakov from the greatest danger he faced with Lavan, learning his dishonest ways. The pure son is informed that the more you study, the more you see how G-d has saved us from the clutches of those who wish to destroy us. The withdrawn son learns that Lavan means white, which appears colorless but really combines all colors. Lavan deceived people with his seeming friendliness, but in reality, he wanted to destroy us.

Rabbi Schwartz brings his vast talent as a rabbi and educator to explain the many themes of the Haggadah from different perspectives, side by side. While this remarkable Haggadah is intended for four different types of people, it also appeals to the different aspects of each individual’s personality. 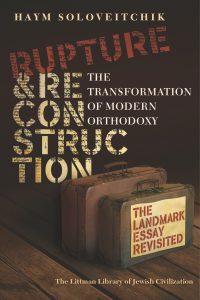 Rupture and Reconstruction: the Transformation of Modern Orthodoxy

The Littman Library of Jewish Civilization, in association with Liverpool University Press

Dr. Haym Soloveitchik’s 1994 essay, “Rupture and Reconstruction,” provoked a good deal of thought and discussion about the transformation of the Orthodox world in the twentieth century. In this recently published book—twenty-seven years later—containing the essay and additional material, Dr. Soloveitchik addresses the many mistaken readings of his essay and responds to many comments and criticisms.

Dr. Soloveitchik’s main thesis in his essay is that the migration from the proverbial shtetl and the subsequent acculturation (which is distinct from assimilation) largely removed the ability to transmit tradition through cultural immersion. Instead, Jewish tradition is now passed on through texts. With this observation, Dr. Soloveitchik proceeds to explain a number of cultural changes that he witnessed in his lifetime. Primary among these changes is the “chumra” culture in which Orthodox Jews—even traditionalists in Bnei Brak—change their family practices based on textual study, something almost unthinkable in previous generations. Dr. Soloveitchik’s attempt to explain many different phenomena with this thesis caused some confusion among readers. In additional material included in this book, he explains where some readers went wrong.

Dr. Soloveitchik points out that he was not trying to explain every change in the community with his theory. Some changes occurred for other reasons, such as the development of modern technology. These changes would have happened even if Jews had remained in their largely self-contained cultures. Additionally, he only described Ashkenazic, non-Chassidic Jews from Eastern Europe who migrated to Israel, England and the United States. Other communities had different experiences. Perhaps most importantly, he was describing and explaining the changes he observed, not judging which form of education and transmission is better.

This new volume contains additional responses, particularly to the many essays published in the journal Tradition for the twenty-fifth anniversary of the article. Dr. Soloveitchik sharpens his points and clarifies his intent, allowing readers to further ponder the sea changes in Orthodoxy over the past century. 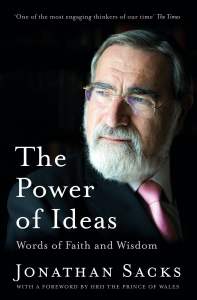 The Power of Ideas: Words of Faith and Wisdom

The premature passing of Rabbi Lord Jonathan Sacks shocked the Jewish world and many beyond. This is because Rabbi Sacks served not only as a leader of the Jewish people but as its representative to the world. With his vast talents, he promoted faith, community and family values to the Western world. His latest book, The Power of Ideas: Words of Faith and Wisdom, consists of posthumously collected articles and speeches delivered to the world at large. The book includes many of Rabbi Sacks’ insights and commentaries, albeit only a small selection from his vast output. More than anything, the book demonstrates the breadth of Rabbi Sacks’ appeal to the broader world by presenting his thoughts at pivotal events in the late stage of his career.

Fittingly, the book begins with a foreword by Prince Charles, who declares himself “an avid reader and follower of [Rabbi Sacks’] work.” The book’s first two sections include selections from Rabbi Sacks’ BBC “Thought for the Day” radio broadcasts and his “Credo” column in the London Times. The third section includes a selection of Rabbi Sacks’ op-eds in major publications. The fourth section consists of some of his addresses to the House of Lords. And the final section includes some of his most important lectures.

In these messages, Rabbi Sacks offers brief but profound thoughts on key events and trends—a royal marriage, Margaret Thatcher’s funeral, interfaith relations, social media, climate change, et cetera. He uses these hooks as the entry to discussion of universal values that all people need to recognize. What does a rabbi have to say about the 400th anniversary of the King James Bible? Rabbi Sacks discusses the initial resistance of the Church to translating the Bible into English and its eventual capitulation because “it’s hard to stop the tide of information once it starts flowing.” Similarly, all of Rabbi Sacks’ messages feel relevant to the times and close to the lives of his listeners and readers.

The longer addresses include some of his most profound insights into the modern world. In a lecture on criminal justice, Rabbi Sacks offers a brief but exciting overview of the intellectual history of criminal justice and notes that the Biblical concept of retribution has been lost to modern and postmodern views of justice. Throughout the book, we find insights into the maladies of the day and potential solutions to the world’s problems, generally based on messages found in the Torah and Jewish history. The essays and lectures themselves are worthwhile, both as thought-provoking ideas and as overviews to key elements of Rabbi Sacks’ thought. Perhaps more importantly, the breadth of topics and audiences, the important events and conferences at which these addresses were presented and the newspapers and media in which they appeared demonstrate the remarkable impact Rabbi Sacks had on thinking people of all faiths and nationalities. He was a Jewish ambassador of ideas who deeply influenced the millions of people who read and heard his eloquent words. 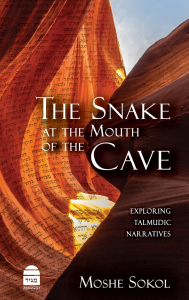 The Snake at the Mouth of the Cave

It is very difficult to piece together biographies of individual sages of the Mishnah and Talmud for two reasons. First, classical texts include stories about specific rabbis only incidentally, when relevant to a broader message. Additionally, those stories often include allegories. Any translation of such stories into biographical material requires a good deal of interpretation.

In The Snake at the Mouth of the Cave, Rabbi Dr. Moshe Sokol, the dean of Touro’s Lander College for Men, conducts both exercises simultaneously, pulling together a number of stories about specific rabbis and offering sensitive and detailed interpretations of these passages. The net result is a series of mini-biographies of the sages Rabbi Eliezer, Akavya Ben Mahalalel, Rabbi Yochanan and Choni the Circle-Drawer. Perhaps the most noteworthy methodological element is the author’s traditional sensibility, his reverence for the sages and his acceptance of the text as we have it. Rabbi Sokol, who holds a PhD from the University of Pennsylvania, carefully acknowledges varying academic approaches but consistently adopts a traditional understanding. Despite his traditionalist orientation, Rabbi Sokol offers many psychological and historical interpretations that combine the different passages into coherent biographical narratives.

For example, Choni the Circle-Drawer is described as sleeping for seventy years, waking up and then encountering various people. After realizing that he no longer fits into this new world, he prayed to die and was answered. This story can be taken literally, as many commentators have done. Rabbi Sokol suggests that it was a dream. Choni was a performer of wonders, a holy man who acted in the spirit of the prophets of prior generations. However, he lived during the Second Temple, when prophecy had ended and rabbis instructed the masses on how they could reach out to G-d on their own. During a drought, Choni drew a circle and demanded rain, like Elijah before him. But the rabbis taught that everyone must fast and pray for rain. In his spiritual approach, Choni was a relic from a past age, as he learned from his dream.

In examining this story and many others, Rabbi Sokol raises a number of questions about the narrative. He then focuses on a key insight that changes our understanding of the text. With this new understanding, he resolves all the questions he had posed. In this classical pedagogic approach, Rabbi Sokol demonstrates how to read a text carefully, how to think about the people under discussion, and how to scrutinize the details within a story to find its underlying message. Along the way, he examines the lives of great sages whose experiences bear profound meaning for all times.

Rabbi Gil Student writes frequently on Jewish issues and runs Torahmusings.com. He serves as the book editor for Jewish Action and is a member of the Jewish Action Editorial Committee.