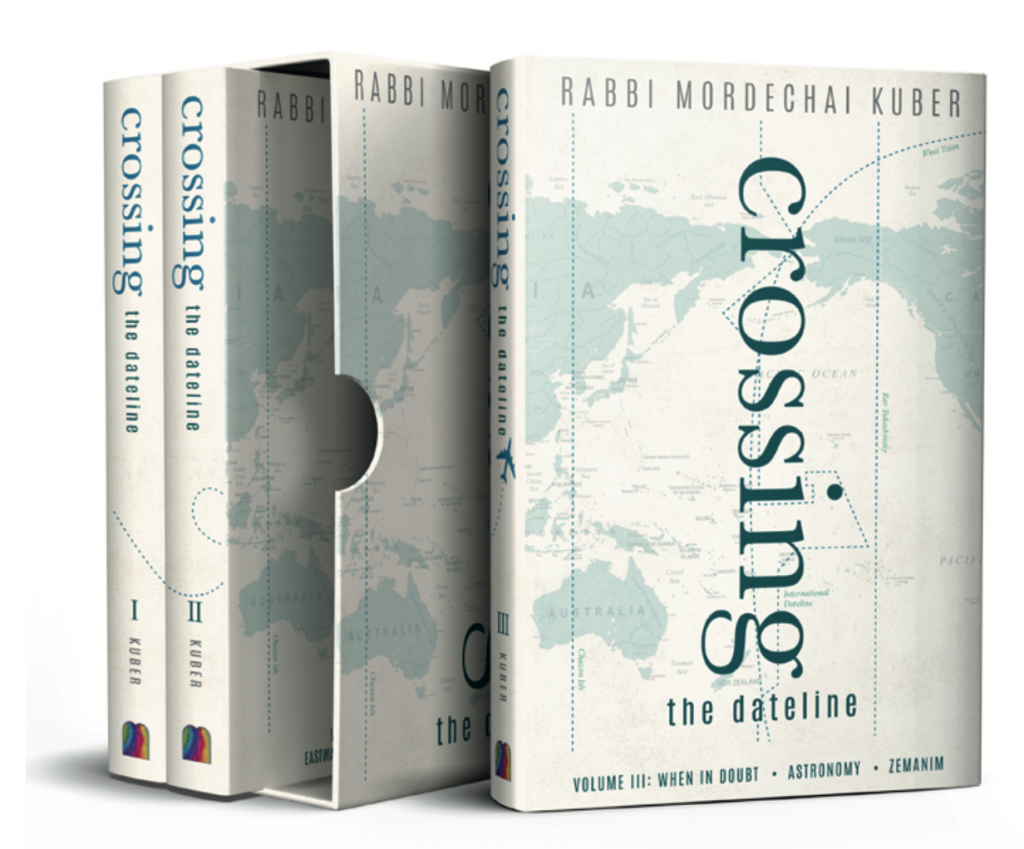 Globalization has raised questions of the halachic dateline to the fore. Many observant Jews regularly travel to India, China and elsewhere in the Far East for business and pleasure. Questions about which day to observe Shabbat and yom tov, when to say which prayers and how to behave while in the air are quickly becoming more complicated and frequent. Much had been written on the subject when the students and faculty of the Mirrer Yeshiva, stranded in Japan and China during the Holocaust, needed to know on which day to observe Yom Kippur. Rabbi Mordechai Kuber, rav of Congregation Nachlas Tzvi Ohel Avraham in Telz-Stone, Israel and a twenty-six-year-veteran of OU Kosher who travels frequently to the Far East, has now written a comprehensive treatment for the layperson. In three volumes, Rabbi Kuber does everything humanly possible to make this complex subject comprehensible so the reader can know what to do in every situation.

In the first volume, Rabbi Kuber describes the fascinating history of the question. Conflicting opinions prompted Israel’s first chief rabbi, Rabbi Yitzhak Isaac HaLevi Herzog, to convene a summit after Rosh Hashanah of 1941 to reach a final conclusion for the yeshivah students in Asia in time for Yom Kippur. However, the great authorities of the day disagreed and sent conflicting instructions to the students. Rabbi Kuber discusses the various sources brought to bear on this difficult subject and explains eleven different views on what constitutes the halachic dateline. At the end of this discussion, he describes a consensus opinion of later authorities that he uses for the practical sections of the book.

The second volume serves as a practical guide for the traveler. Rabbi Kuber surveys the different areas in halachah that are affected by the halachic dateline and offers guidance on how to act. The possible circumstances quickly multiply when dealing with different opinions regarding the mitzvah in question; places in the world with varying levels of certainty about the day; and differences between crossing westward or eastward. In accessible halachic prose, Rabbi Kuber explains the issues and the halachic opinions. At the end of volume two, he offers reference charts so the reader can quickly find practical guidance. The number of possible scenarios is large, making a simple reference chart impossible. Rabbi Kuber has put a lot of thought into simplifying the charts as much as possible for ease of use. One noteworthy aspect is the author’s deference. Even though Rabbi Kuber personally observes a different view than the consensus opinion (he follows the position of Rabbi Yisroel Belsky, zt”l), he presents the consensus opinion as the standard for practice and his own as a variant.

The third volume addresses what to do when you do not know what day of the week it is. Rabbi Kuber takes the established thinking on the subject, expands it to its logical conclusions, and applies it methodically to the full Jewish calendar. He then adds a number of chapters on a variety of related subjects, such as Jewish practice in the Arctic Circle and in space.

Rabbi Kuber’s treatment of this complex but very relevant subject is exhaustive and can be exhausting. Yet despite the comprehensive nature of the work, it remains exciting and enlightening. This is an intellectual work full of surprises yet still extremely practical for the international traveler. 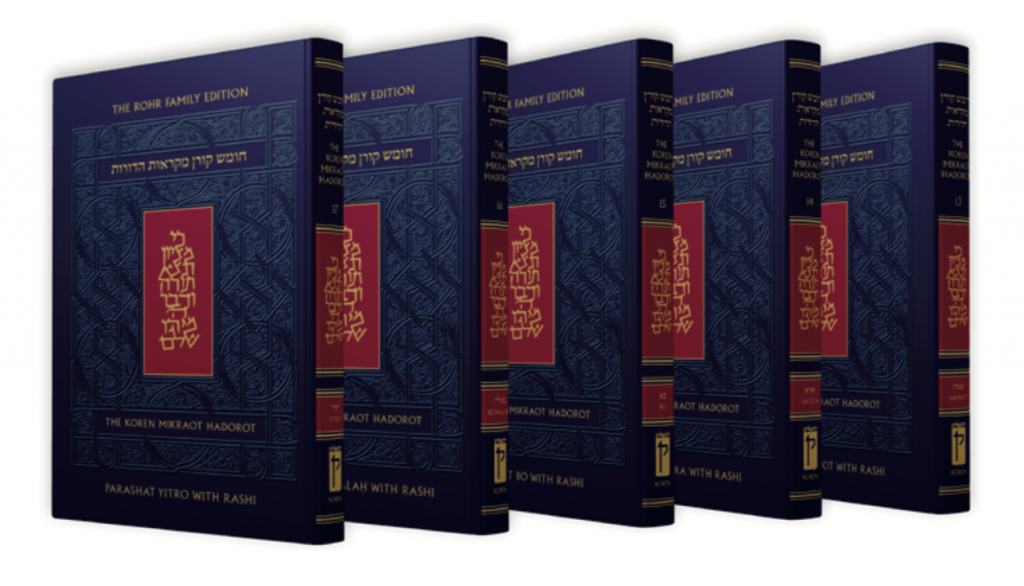 Koren’s new Mikraot HaDorot reimagines for the English-reading public the concept of a Mikraot Gedolot, a rabbinic Bible. A classical Mikraot Gedolot contains the Biblical text, one or more Aramaic translations, and a collection of in-depth classical commentaries debating the simple meaning of the text with arguments and proof texts. A reader must be trained to study the often obscure and lengthy commentaries in order to fully appreciate the differing readings of the text. Mikraot HaDorot follows this pattern of collecting varied commentaries on the text, but takes them in a very different direction.

Mikraot HaDorot is divided into five sections. One section contains the full text of the Bible and Rashi in Hebrew and English. This serves as a tool for the many people who review the weekly Torah portion with Rashi. However, unlike previous translations that were intended to assist the Hebrew reader by following word for word in a literal but somewhat awkward English, Mikraot HaDorot’s translations stand on their own. They offer a flowing text comprised of ordinary English syntax and appropriate referents that avoid ambiguous pronouns. This yields an elegant and natural, if somewhat loose, English rendition of the Torah and Rashi.

The Mikraot HaDorot series is projected to cover the entire Chumash, with one slim volume devoted to each weekly Torah portion. Each volume is sufficiently compact to allow you to carry it with you wherever you go so you can review the weekly portion throughout the week. With a whole volume devoted to each weekly portion, you can easily be overwhelmed. The separation into different sections eases the challenge, so you can review the weekly portion in one section and flip through the other sections for further study. Mikraot HaDorot is an accessible and portable encyclopedia on the weekly Torah portion, designed for the English reader seeking depth and meaning. 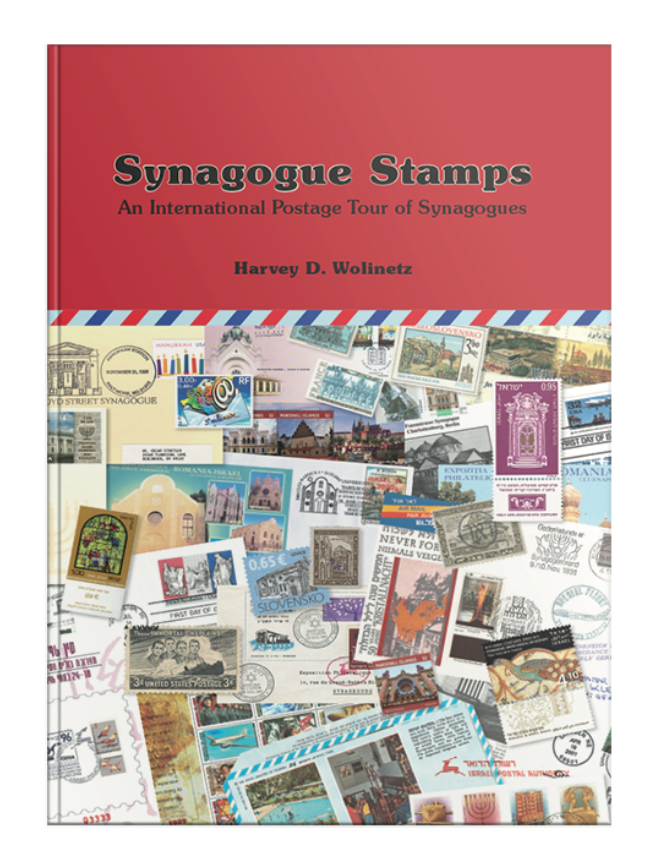 Jews have made outsized contributions to the societies in which we have lived throughout the ages. One measure of acceptance is the appearance of Jewish symbols and landmarks on postage stamps, an official government acknowledgment of Jewish community and history. In Synagogue Stamps, Harvey Wolinetz displays his exhaustive collection of postage stamps and related postal markings from across the world that feature synagogues. In doing so, he documents in a beautiful and dramatic way the historically notable synagogues in Israel and the Diaspora.

The collection spans the century, from 1918 through 2019, including stamps from both world wars. Particularly surprising is the diversity of countries issuing stamps commemorating, and taking pride in, their synagogues or celebrating Jews in general. In 1996, The Gambia (a small country in West Africa) issued a stamp featuring a Jew praying at the Western Wall. In 2019, Tunisia released a stamp featuring the El Ghriba Synagogue on the island of Djerba. In 2008, the Hungarian Postal Service began issuing stamps celebrating Hungarian synagogues. The stamps—a total of eight published so far—show beautiful images of the interior of historically noteworthy and picturesque synagogues in Hungary. All these and many more stamps show the vibrant Jewish life that once existed across the Diaspora, as recognized in postal memorabilia. 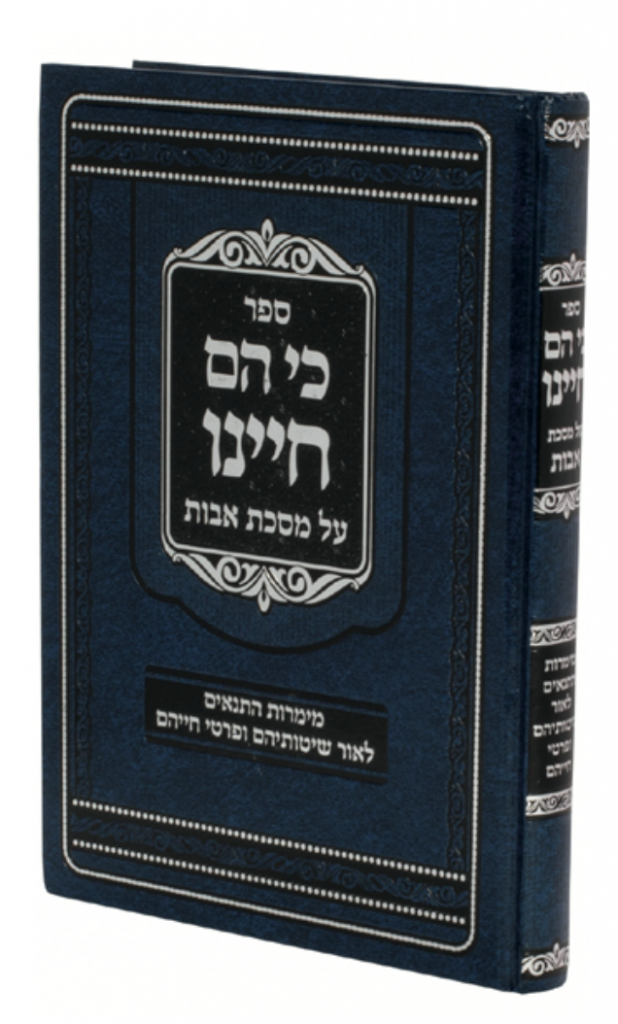 In 1859, nearly thirty years after his death, Rabbi Chaim Volozhiner’s commentary on Pirkei Avot was published with an introductory essay by his grandson-in-law, Rabbi Yehoshua Heschel Levin. Rabbi Levin asks a fundamental question about this Mishnah tractate. With ethical comments interspersed throughout the Mishnah and other Tannaitic literature, why were these specific sayings identified for inclusion in Pirkei Avot? In particular, many of these teachings are quite basic, one being the quotation of a Biblical verse and others scriptural paraphrases. His answer changes our view of Pirkei Avot and offers a new avenue for commentary. The teachings collected in Pirkei Avot reflect the unique challenges each rabbi faced in his generation or in his personal life, or relate to other important teachings of his. If we explore the lives and times of the rabbis, we better understand their teachings in Pirkei Avot.

Rabbi Levin offers a number of examples, divided into five categories, of how the sayings in Pirkei Avot reflect their teachers. However, he leaves most of the tractate unexplained. In his Ki Hem Chayeinu commentary, Rabbi Shlomo Schwartz, CFO of the OU, moves this scholarship forward. Quoting from a broad selection of commentaries, ranging from the popular to the obscure, he creates a conversation across the ages about how the teachings in Pirkei Avot reflect their teachers. Perhaps most famous is Rabbi Shimon Ben Shetach’s admonition to interrogate witnesses thoroughly (Avot 1:9), connected with his son’s execution due to false witnesses extracting revenge on the great sage (Yerushalmi, Chagigah 2:2). Rabbi Schwartz moves beyond this simple example to many other rabbis in Pirkei Avot.

Coming after Hillel and Shammai, Rabban Gamliel was in the first generation after the Zugot, the pairs of Sages. He lived in a new era of Torah transmission that was visibly weaker than previous generations. Reflecting that change, Rabban Gamliel taught, “Get yourself a teacher, avoid doubt” (1:16). He emphasized the need for greater study than in the past due to the decreased knowledge of Torah even among scholars.

Rabbi Schwartz’s commentary is filled with examples such as these, culled from traditional commentaries. However, there is still much work to be done because a large part of Pirkei Avot remains unexplained within the approach of Rabbi Levin. Rabbi Schwartz has moved this commentarial enterprise forward by collecting much material, but there is still room for the enterprising scholar to explore the as yet historically unexplained teachings of Pirkei Avot.

Rabbi Gil Student writes frequently on Jewish issues and runs Torahmusings.com. He serves as Jewish Action’s Book Editor and is a member of the Jewish Action Editorial Committee.

5 2 votes
Article Rating
This article was featured in the Summer 2021 issue of Jewish Action.