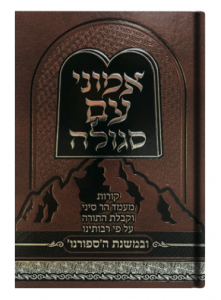 Emunei Am Segulah
Arguably, the revelation at Mount Sinai is the most important passage in the Bible. However, despite its central role, the narrative is confusing. Is Moshe ascending the mountain or is he already there? And when did he go down? The Gemara (Shabbat 86a) tries to piece together the story for each of the seven days between the Israelites’ arrival at Mount Sinai and the forging of the covenant (Exodus 19–24) but leaves much unexplained. One modern scholar characterizes the narrative as reflecting the confusion and overwhelmed state of the people at that monumental time.

To bring clarity to this important topic, which has received surprisingly little treatment, Dr. Allan Jacob and Rabbi Moshe Kravetz teamed together to present the detailed story of the giving of the Torah. The first half of Emunei Am Segulah takes the reader day by day, step by step, from Rosh Chodesh Sivan through the seventh day of that month, and then period by period until the tenth of Tishrei, which would become Yom Kippur. On Rosh Chodesh, the Israelites reached Sinai (Exodus 19:1-2). On the sixth day of Sivan, they received the Torah. On 17 Tammuz, Moshe descended from the mountain and broke the first Tablets. On 10 Tishrei, Moshe descended with the second Tablets. In between these famous dates, much of the story occurs. The authors present a chronology of events, clarifying the text based on several commentaries, particularly Seforno.

Most readers are familiar with the text and the stories but have trouble putting them all together into a comprehensive picture. By transforming these classic stories from familiar verses to actual events that happened to real people in history, this book will grant you clarity, enabling you to envision how things proceeded. Additionally, the authors present Seforno’s timeline of the giving of the commandments, consisting of nineteen stages from Adam through the Book of Deuteronomy.

The second half of the book studies topics related to the giving of the Torah, based on Seforno’s comments throughout his commentary and in other texts. Seforno lived in Italy during the period of the Jews’ expulsion from Spain and the subsequent decades of intellectual and Messianic ferment. His thought shows kabbalistic influence without using kabbalistic terms and sources. Using only traditional and non-academic sources and methods, the authors present lengthy treatments of Seforno’s views on topics such as Jewish chosenness and the uniqueness of Moshe’s prophecy.

Emunei Am Segulah is a much-needed book, addressing a crucial but little-understood Torah subject. The book’s Israeli Hebrew might be too difficult for many Americans, but readers will be rewarded for their hard work with a clear picture of the seven days of the giving of the Torah and the subsequent four months of the giving of the Tablets. 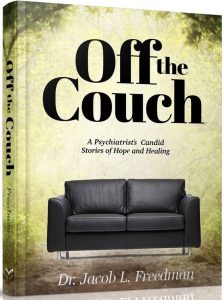 Off the Couch: A Psychiatrist’s Candid Stories of Hope and Healing
There is a growing recognition in general society, as well as in the Orthodox Jewish community, that being treated for mental health issues is beneficial; the social stigma is slowly dissolving. Dr. Jacob L. Freedman’s Off the Couch will help convince you that therapy is appropriate for a wide variety of people.

An American-born psychiatrist practicing in Jerusalem, Dr. Freedman has an infectiously positive attitude toward life. In his collection of short clinical stories, Dr. Freedman tells us about the hidden heroes, people who find great spiritual forces deep within themselves to overcome enormous challenges in daily life. He shows us how he facilitates their progress through therapy, and allows us to celebrate in their victories.

Off the Couch contains dozens of vivid stories about patients with problems big and small. Sometimes therapy and medication can greatly help a patient. Sometimes there is no cure. To Dr. Freedman, every case is different; every individual is unique; and every Jew is holy.

When a rosh kollel sends a kollel student with obsessive-compulsive disorder to Dr. Freedman, the psychiatrist must convince the patient he has a problem rather than just a praiseworthy affinity for stringency. Only then can the patient begin the treatment—which has a high probability for success. When a woman insists her narcissistic husband see a psychiatrist, Dr. Freedman helps the patient realize that his attitude is destroying all the relationships in his life. A yeshivah student who stays awake for days studying Zohar is convinced he needs to ascend the Temple Mount and take a vow of asceticism, and has multiple risk factors, including a family history of bipolar disorder, is sent to the hospital immediately. Thereafter, the student is instructed to continue taking his medications, and he returns home to his parents so he can, over time, progress in his Torah studies and religious growth. These are some of the many people we meet in this charming book.

You can tell much about a person by whom he admires. Dr. Freedman devotes many pages to praising rabbis, teachers and local activists who notice people suffering and take responsibility for getting them help. There is the prominent speaker who is verbally assaulted by a woman who turns out to be suffering from postpartum depression, and invests time and energy to ensure the young mother receives the treatment she needs. There is the man whose home is a central location for drifting boys, who, while flying off to Europe to help another boy in great need, asks Dr. Freedman to consult one of these young men. Dr. Freedman does us a favor by letting us know that such wonderful people exist, giving us the opportunity to try to be at least a little bit like them. We can all do more to care for the unseen suffering people in our communities.

Everyone needs support in different areas of their lives. Needing the help of a mental health professional should be no more embarrassing than requiring the help of a podiatrist. Supplemented by inspiring stories of religious faith and virtue, Off the Couch offers us a glimpse into the multitude of ways a psychiatrist can help a patient. 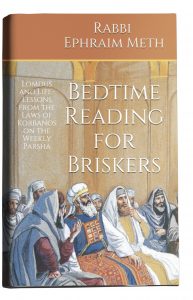 Bedtime Reading for Briskers
A surprisingly large portion of the Torah discusses the details of the sacrificial order. For many people today, these conversations seem foreign, if not archaic or at least obscure. Those who review the weekly Torah portion might tune out whenever sacrifices are mentioned, but those who study Mishnah and Talmud are obliged to learn all about the different sacrifices, services and utensils of the Temple. Once you gain familiarity with the subject, you begin to discern the wisdom in the various details and in the debates about sin, forgiveness, purity and holiness.

The saintly Chafetz Chaim campaigned for in-depth study of these subjects. Over a century later, countless yeshivot and kollelim focus on these areas of the Talmud, thousands of Daf Yomi participants spend years on these texts, and libraries of books have been published on these subjects. Perhaps most famously, the Brisk yeshivot in Israel study the Talmudic tractates related to sacrifices.

Rabbi Ephraim Meth takes the detailed laws of sacrifices and addresses them from the perspective of Jewish thought. What lessons are embedded in these rules? What rationales can we find for these seemingly arbitrary laws? In the course of his exploration, Rabbi Meth finds that these laws are anything but arbitrary; in fact, they are steeped in the deep logic of Jewish values, which we ignore at our own loss.

What is the common denominator between the various asham (guilt) sacrifices? Rabbi Moshe Isserles suggests they all atone for sins of greed and theft. Rabbi Samson Raphael Hirsch argues that they atone for abuses of authority and control. Rabbi Meth explores these explanations and offers his own—that it is a complex sacrifice intended to atone for complex situations. When human interactions become complicated and the status of an action is not entirely clear, the situation calls for an asham to identify and atone for the complexity.

Why are we forbidden from using consecrated items for our own benefit (me’ilah)? Rabbi Meth questions whether a consecrated item may not be used for personal benefit because it does not belong to you, or whether it is the reverse—it does not belong to you since you cannot benefit from it. He quotes a debate between two commentators with textual proofs in each direction. G-d owns everything, so if you cannot use something because it is not yours, then me’ilah should apply to everything. Rabbi Meth suggests a compromise position: It is true that G-d owns everything in the world and therefore the concept of me’ilah should apply to everything. However, G-d forgoes His ownership rights in cases that do not involve an abuse of sanctity (e.g., accidentally damaging sanctified objects does not constitute abuse while stealing them does).

If you have a basic familiarity with the subject of sacrifices, you will benefit from the halachic and hashkafic topics covered by Bedtime Reading for Briskers, albeit it is not an introductory work. It is most valuable as a guide on how to view sacrificial offerings and how to approach other obscure Torah topics that you encounter in your studies.

Rabbi Gil Student writes frequently on Jewish issues and runs Torahmusings.com. He serves as the book editor for Jewish Action and is a member of the Jewish Action Editorial Committee.

5 1 vote
Article Rating
This article was featured in the Summer 2022 issue of Jewish Action.