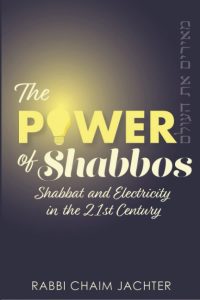 The Power Of Shabbos: Shabbat And Electricity In The 21st Century

It is common knowledge that on Shabbat one may not turn on or off anything that runs on electricity. However, most people are not clear why that is the case. The simple answer is that this is not a simple question. The invention of electrical appliances was a new frontier that presented various halachic issues, and the analogies to Talmudic cases depended on interpretation, leading to great debates carried out in responsa and other publications.

Beginning in the late nineteenth century and continuing through today, halachic scholars analyzed the issues in conversation with engineers and scientists, all while technology continued evolving. By necessity, these conversations are complex and take place over time. Effectively, we are witnessing the halachic process in action. The average person, however, lacks the background to see the comprehensive picture, to understand the back-and-forth debates and the different views as they unfold. This leaves people knowing that electricity is forbidden on Shabbat but not knowing why. Some have raised questions about the prohibition against using electricity on Shabbat, although most people know that Shabbat would be unrecognizable and its sacredness violated if electricity were allowed.

For over thirty years, Rabbi Chaim Jachter has been writing about halachah and electricity for the English-speaking public. His clear prose brings different views into conversation with each other, offering prooftexts and counterproofs, arguments and answers, bringing the words of the great halachic authorities to life. He gives readers a taste of the halachic debate, careful not to overwhelm while providing some depth. With his new book, however, Rabbi Jachter offers a more comprehensive approach to the topic of electricity and Shabbat.

The Power of Shabbos is an unprecedented guide to the halachic process surrounding electricity and Shabbat. It illuminates an obscure conversation that greatly affects the lives of observant Jews. This is a book about halachah and not history, so it follows topics as opposed to chronology, generally omitting the historical context in which the scholars lived and instead focusing on concepts and applications.

The book begins with a discussion of general issues and approaches surrounding electricity and Shabbat. It then surveys the key issues of debate throughout the twentieth century and into the twenty-first. These include: refrigerators, elevators, baby monitors, e-commerce and more. Throughout, Rabbi Jachter focuses on three elements of the conversation: key texts, halachic concepts, and important rulings. He frequently consulted with leading rabbis while writing the book and includes their original rulings that have not been published elsewhere.

As a reader, you will find yourself involved in the conversation, appreciating the different views and the intricacy of defining the halachic parameters of new technology. You will emerge from this book with a deeper understanding of the complex issues of Shabbat in the modern world.

By design, The Power of Shabbos addresses the many questions that have been raised in the past and does not speculate about unresolved questions that lie ahead. As we move forward
and as new technologies emerge, wevcan expect Rabbi Jachter to continue helping us understand the multifaceted views of the leading halachic authorities. 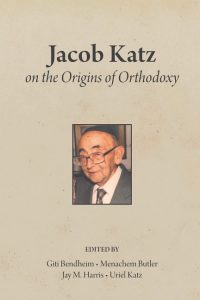 Jacob Katz On The Origins Of Orthodoxy

Professor Jacob Katz was the founding historian of Orthodox Judaism. He revolutionized Jewish history in two separate ways during two periods of his life. At the same time, he trained a cadre of scholars who have continued his work. Jacob Katz on the Origins of Orthodoxy is a fascinating and surprising tribute to a pioneering historian who passed away nearly twenty-five years ago.

Katz was born in Hungary in 1904 and received a traditional Orthodox education, culminating in his studies in the famous Pressburg Yeshiva. He then moved to Frankfurt, Germany, immersing himself in the world of Rabbi Joseph Breuer while earning a doctorate at the University of Frankfurt. He left Germany in 1934, settling in Israel and eventually joining the faculty of Hebrew University. In Frankfurt, Katz studied under the great sociologist Karl Mannheim, whose influence can be felt in the first phase of Katz’s scholarship. He studied the medieval and Early Modern Ashkenazic Jewish communities from the perspective of social history, analyzing what life was like in those times. His studies broke new ground in his approach to Jewish history and his use of traditional rabbinic literature, particularly responsa. Some of his most famous studies include the pre-modern shtetl, the attitudes within Jewish law toward Christianity, and the phenomenon of the “Shabbos goy,” a gentile who performs forbidden work on Shabbat for Jews. Effectively, Katz created a new field of study that looked at the timeline of transformations in Ashkenazic life as the world around us changed dramatically.

During the last two decades of his life, Katz changed course and focused on the history and development of Orthodox Judaism. He defined Orthodoxy as a conscious choice to live a traditionally observant Jewish life. Previously, living such a life was taken for granted. With the advent of modernity, Enlightenment and Emancipation, Jews had to choose to live traditionally. Katz had personally lived in two of the key communities that played a role in this historical drama—Pressburg and Frankfurt. He broke important ground with his studies of the development of a conscious Orthodoxy that defended itself against reforms through a variety of methods and asserted itself as a delineated community. Late in life, Katz created the field of study of the history of Orthodox Judaism. Interestingly, Katz trained students who continued his work and, following the spirit of courage and academic truthfulness he taught them, questioned many of his key findings.

This book serves as a tribute in three ways. First, it contains many articles about his life and storied accomplishments. Second, it contains interviews with Katz as well as important articles that he published. Third, the book includes respectful critiques of Katz, particularly by his students. These critiques cut to some of his key methods, definitions and conclusions. As a continuation of his own work, they revise his theories and refine his approaches. However, none
of these discussions would be taking place if Katz had not shown us the way. The clear conclusion from reading this book is that Jacob Katz asked the right questions and began the immense work of finding the answers, which his students continue to this day. 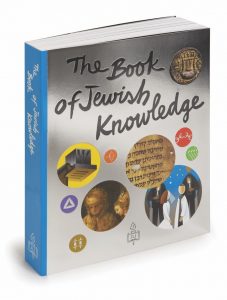 The Book Of Jewish Knowledge: A Multifaceted Exploration Of The Teachings, Observances, And History Of Judaism

Many Jews are thirsty for knowledge about their heritage. In the past, they could only find what they needed through books or in-person encounters. Today, technology has given us many more, varied opportunities—websites, videos, interactive discussions and more. And yet nothing can replace a book you can read on your own and return to time and again for reference. However, for a book to invite today’s reader, it often needs to be comparable to a multimedia experience. The Jewish Book of Knowledge masterfully uses design to educate in an engaging way.

The book provides a beginner’s overview to Judaism, which of course is also useful to those with a strong Jewish education. Five sections divide different aspects of Jewish knowledge: Jewish History, Jewish Teaching, Jewish Practice, The Jewish Year and Lifecycle Milestones. Each section contains an introduction and brief explanations, but mainly consists of quotations from other texts. These texts include a diverse range of Bible, Talmud, Midrash, commentaries throughout the ages, and first-person stories and perspectives from a wide variety of people. Throughout, the book is full of stunning pictures, informative illustrations, helpful charts, timelines and maps. For example, a color-coded timeline, brilliant in its simplicity and breadth, shows many of the great scholars and published works of traditional Jewish scholarship by genre, from the Bible through Rabbi Ovadiah Yosef. Similarly, the book contains a map that uses color, overlaid on geography, to display the spread of the Diaspora throughout the millennia.

The book clearly emerges from a Chabad outlook and includes many quotations from Chabad thinkers. However, the editor also uses quotations from rabbinic figures such as the Chatam Sofer and Rabbi Joseph Ber Soloveitchik as well as scholars Viktor Frankl, Cecil Roth and many others. Despite containing profound thoughts and covering an enormous amount of material, the book maintains a light touch. Some editorial choices are refreshing. For example, the life cycle section includes a short chapter on work and retirement, which is unusual but quite appropriate. The Book of Jewish Knowledge is a coffee table book that draws you in to survey a panorama of Jewish life, thought and history in dazzling multicolor.