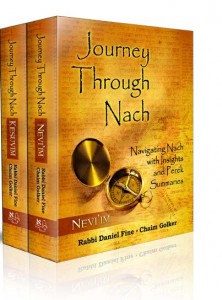 In Talmud study, we differentiate between studying in depth (iyun) and covering ground (bekiut). The “New School” is providing iyun on an unprecedented level. The OU’s successful Nach Yomi program (www.ou.org/torah/nach-series/nach-yomi) has motivated many to tackle the difficult task of bekiut, studying every verse of the Bible. Daily Nach UK and Daily Nach Israel are similar independent programs. The text that was born from these programs, Journey Through Nach, is a guide to gaining familiarity with every book and chapter of Nach.

The authors summarize every chapter clearly and briefly. Additionally, they add occasional divrei Torah from classical commentaries and mussar greats, as well as in-depth essays in the back of the book on topics of Jewish law and thought that emerge from the Biblical text. Remarkably, this is a series from the traditional beit midrash, not the academy or the “New School.” One might call it Chareidi or at least emerging from the Chareidi yeshivah world. Apparently, the revolution of Orthodox Tanach study has spread beyond its initial audience.

Chicken and meat have been part of the Jewish menu, particularly on Shabbat and holidays, since time immemorial. Can anyone construct a coherent traditional argument to refrain from those delights? Some activists greatly overstate the case for vegetarianism, cherry-picking sources and ignoring history. In contrast, Rabbi David Sears presents an honest survey of the issues and different views. He masterfully describes the halachic, philosophical and kabbalistic arguments, incorporating translations of key texts and extensive endnotes. While himself a vegetarian, Rabbi Sears clearly demonstrates that eating meat is religiously acceptable. According to some, vegetarianism is an Edenic ideal to which one should strive. According to others, eating meat shows the difference between humans and animals, perhaps even elevating the consumed animals to a higher level of existence. But all agree that we should minimize cruelty to animals and eat healthily.

I often hear rabbis say that one of the greatest personal challenges facing this generation is handling material plenitude responsibly. Too many of us eat too much and for all the wrong reasons. Even a limited vegetarianism—perhaps only during weekdays—can help us think differently about food and its purpose in our daily lives. 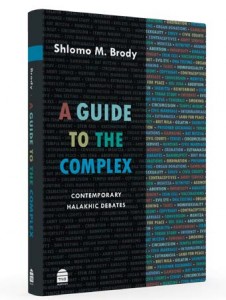 As technology and culture change, as unique situations arise, many people want to know what Judaism has to say about the issues of the day. Yet Jewish law is anything but straightforward. An honest discussion must include multiple opinions that weave their way through history, at times intersecting and then diverging. Many have attempted to simplify these stories, but few have succeeded.

Rabbi Shlomo Brody consistently presents issues “ripped from the headlines” in an accessible yet comprehensive way. Think of a hot topic, and he has discussed it. Quoting opinions throughout the ages and across the spectrum, he explains the different views with clarity and authority. Yet, given the great significance of his topics, he cannot fail to take a side, unlike what one may do with theoretical issues of little social importance. Rather, he often subtly shows his personal view, as one would expect from an author who deeply cares about these issues.

The standard yeshivah student intentionally looks at the Talmud and commentaries ahistorically, judging the back-and-forth arguments on their merits and not on who made

the claims and why. While this is appropriate, it masks an important piece of Judaism—mesorah, tradition. Judaism is based on an ancient tradition passed down through the millennia. If we fail to recognize the transmission from teachers to students, we lose appreciation for the precious mesorah we possess.

In his day, the Rambam included a list of the chain of transmission in the introduction to his Mishneh Torah. The Meiri updated the list until his day, as did others after him. Rabbi Aryeh Leibowitz takes us back to the tenth through twelfth centuries and describes the chain of transmission in those important years. Starting with the early Rishonim, he explains to the yeshivah student the paths of those famous rabbis, whose commentaries and rulings are widely studied in yeshivot. With Rabbi Leibowitz’s short and easily read book, which is informed by modern scholarship but completely traditional, a yeshivah student will learn where the people whose names he sees so often lived, from whom they learned Torah, and what books they published. For example, students are probably familiar with Rabbi Shimshon (the Rash) of Shantz. But do they know that he was the third most important Tosafist, behind only Rabbeinu Tam and the Ri? Or that he moved to Israel toward the end of his life because of anti-Semitism in France? Rabbi Leibowitz’s book is an important supplement to a traditional yeshivah education.

Rabbi Gil Student writes frequently on Jewish issues and runs TorahMusings.com. He is a member of the Jewish Action editorial board.