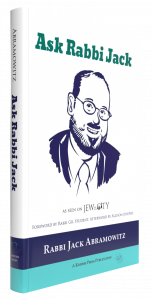 “The yeshivah curriculum . . . focuses mainly on textual skills and select topics. For good pedagogical and sociological reasons, much of the Torah remains outside the standard curriculum, waiting for the motivated student to find and study it. Too many people never take that initiative.”

We could devote this entire essay (and more) to the few words from Rabbi Gil Student’s Foreword to Ask Rabbi Jack. I believe they are true and insightful. But for our purposes here, they serve more importantly to contextualize the importance of Ask Rabbi Jack for the readership of Jewish Action. Such books are often classified as part of the kiruv genre, presenting the profundity of Torah-true Judaism to outsiders while addressing their misconceptions of Orthodoxy. That endorsements on the book’s back cover are from Rabbi Steven Burg of Aish HaTorah and Allison Josephs of Jew in the City, two organizations known for their outstanding kiruv, just serves to reinforce that classification.

But such a classification would only be partially true. As Rabbi Student notes, even those of us (perhaps especially those of us) who have had a decent and comprehensive Orthodox Jewish education have often come away with little understanding of the actual breadth and depth of Torah thought.1 Kiruv is of paramount importance to us, and the precept of da mah shetashiv—know how to respond [to a disbeliever]—2 is one of utmost importance. But as many sources note, a primary purpose of this precept is that we should know how to respond to the disbeliever within every one of us.

Of course, there is a rich literature of books dealing with such issues that falls beyond the scope of the standard yeshivah curriculum. One might, for example, read through the six volumes of Strive for Truth, the translation of Rabbi Eliyahu E. Dessler zt”l’s Michtav Me’Eliyahu, and acquire vast knowledge of such areas of Jewish thought. Inevitably, however, some contemporary readers will have a hard time relating to the material and style of that and similar works. From this standpoint, Rabbi Jack’s book speaks to this generation in a very effective fashion.3

A salient example is his treatment of the issue of secular music. Rabbi Jack displays a sensitivity to his audience—who he assumes grew up, like himself, with this music in its ears—and a perspective grounded in that sensitivity that is much more nuanced and accepting than one would find in works intended for other audiences. Similarly, you won’t find many other sefarim that would use Princess Diana and Nancy Reagan as examples of how to combine modesty with attractiveness. Yet these are figures whose mode of dress would be immediately recognized by many (if not most) of this magazine’s reading audience.

Rabbi Jack’s analyses are as comprehensive as one could wish or expect, allowing for the necessary brevity in a work that covers such a broad array of topics. Nevertheless, it would have been useful and conducive to further exploration if more comprehensive sources and references were included. For example, in a succinct review of Orthodox attitudes toward Zionism, there is not a single reference, even when the author quotes the gemara in Ketubot (111a), about the Three Oaths—a core point of contention in any such analysis. Such sources and references are not always lacking. In a discussion of when one should be stringent and when one may be lenient in matters of halachah, Rabbi Jack provides ample sources. Perhaps in the next edition the author can add references and sources to the articles in which they are lacking.

There is but one more critique of this fine work worth mentioning. The cover selected by the publisher does not adequately convey the high quality of the book’s contents; one does not associate a cover with a caricature of the author with high-caliber analysis of profound issues. This is truly a case of “Do not judge a book by its cover!”

I found many of the articles full of information and insight. The essay on anti-Semitism offers a comprehensive overview of the four manners in which the controversial statement of Rabbi Shimon, “Halachah b’yadua she’Esav sonei l’Yaakov” (“It is a well-known law that Esav hates Yaakov”) is interpreted. Rabbi Jack’s assessment of the authenticity of the Zohar is another masterful analysis. (Full disclosure: Rabbi Jack bases much of what he writes on what he learned from my esteemed brother, Rabbi Yochanan Meir Bechhofer, “who is far more well versed in the Zohar than you, I or the person who compiled that list of proofs [that the Zohar couldn’t have been written by Rabbi Shimon bar Yochai].”)

In the article on tzeniut (modesty), Rabbi Jack notes that the oft-cited assertion that “What Torah does for men, tznius (sic) does for women,” lacks any known support in Tanach or Chazal, or in the Iggeret HaGra (the letter that the Vilna Gaon sent to his wife when he was on his way to attempt to reach Eretz Yisrael). As recently as this past Tishah B’Av, I myself heard a well-known and admired talmid chacham cite the assertion and attribute it to the Vilna Gaon’s letter. Since the time my daughter came home from school and related this assertion and the alleged source (the Gaon’s letter), I have gone through the Iggeret several times. It does not say anything of the kind there (although Rabbi Jack tries to be melamed zechut—find some merit in the assertion—through a very dubious inference). He does go on to note that tzeniut is a very important trait, one of the “Big Three” in Michah 6:8, “. . . what G-d asks of you, only that you act justly, love mercy and walk humbly (hatznei’a lechet) with your G-d.” In its source in Michah, however, “tzeniyus is not just a ‘women’s mitzvah’ and it’s not just about what we wear. Tzeniyus is for everyone, and it’s ultimately about how we act.”

A more significant point is that of organ donation. Rabbi Jack writes that he is “a big fan of the Halachic Organ Donor Society” (HODS). Yet in the same paragraph, he notes that his “HODS card has the box checked for irreversible cessation of heartbeat (which is the more stringent position) [in terms of defining the donor as dead for the purpose of harvesting organs].” The position taken by the author is not HODS’ preferred position (which is to use “brain stem death” as the definition of death), yet someone reading that Rabbi Jack is a big fan of HODS might assume that its standard is just fine and that Rabbi Jack’s stringency is just a personal one. This is actually a very complex and delicate halachic issue with much controversy surrounding the lenient position. More elaboration and detail would have been helpful.

By and large, this work is extraordinary in its scope, impressive in its depth and, perhaps most importantly, a pleasure to read. As they say—“highly recommended.”

1. For a more elaborate discussion of this issue, I refer the reader to my review of Facing Current Challenges by Rabbi Dr. Yehudah (Leo) Levi, zt”l, which appeared in the fall 2003 issue of Jewish Action (https://jewishaction.com/books/reviews/facing-current-challenges-essays-judaism/).

3. This should not come as a surprise, considering his long-term association with the OU and with its youth movement, NCSY, the premier organization dedicated to inspiring and empowering Jewish teens.

Rabbi Yosef Gavriel Bechhofer is a rav and dayan in Monsey, New York. He recently published the fourth edition of The Contemporary Eruv: Eruvin in Modern Metropolitan Areas (New York, 2020). He is a frequent contributor to these pages.