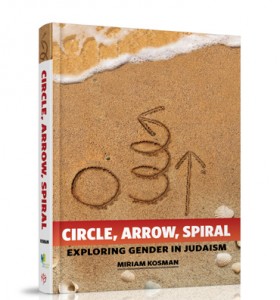 Circle, Arrow, Spiral: Exploring Gender in Judaism is a fascinating book that turns the women in Judaism conversation on its head. Growing up as a Conservative Jew, I was certain that Orthodox women were “subjugated.” When I started exploring Orthodoxy in my late teens, I was repeatedly told that women in Orthodoxy are considered “different than men but equal.” There were compelling arguments, such as how the righteous women were the ones who redeemed us from Egypt and who will bring about the final Redemption; Creation went from simple to complex (ending with woman); and sexual rights for women in marriage were spelled out thousands of years ago.

While I was used to an egalitarian synagogue set-up from childhood, as I learned about women’s exemption from time-bound mitzvot, it all seemed logical. Being a mother of four, it is clear to me that if my husband and I were both obligated to daven with a minyan three times a day, the kids would suffer.

Many non-Orthodox Jews disagree with the “different-but-equal” approach, and contend that it is mere apologetics. Author Miriam Kosman, who was born, bred and continues to be Chareidi, agrees with them! The basic gist of her book (which is packed with a very impressive list of both Jewish [i.e, midrash, Talmud] and secular sources [feminist literature]) is that the relationship between men and women is based on a passage in Chullin 60b, where the moon’s light is diminished:

Kosman, a doctoral candidate at Bar-Ilan University, argues that in Creation, man and woman started off as equals too, but after the sin in the Garden of Eden, the status of woman was lowered. The good news, though, according to Kosman, is that when Mashiach comes, the moon’s light (i.e., women’s stance in Judaism) will be restored. The shift is already beginning to take place, she explains.

Though I find this “men-and-women-are-unequal” approach troubling, there are many ideas in this book which do resonate with me, such as Kosman’s acknowledgement that while there are such things as “feminine traits—what she calls “circle” (like being present in the moment) and “masculine traits”—what she calls “arrow” (like being ambitious)—all men and women have a mixture of both.

Kosman also writes that the Western world places a premium on “masculine” traits, i.e., always looking to get ahead, while Eastern religions value the “feminine” traits, i.e., satisfied in the “Zen” mentality.

With the passage of time, the world tends to value feminine and Eastern traits more, and the ultimate goal, according to Kosman, is to blend the two—to take the best aspects of the circle and the best aspects of the arrow and create a spiral. While I appreciate being a complex human being—one who can be both “in the moment” and full of ambition—I agree with Kosman that the carving out of distinct masculine and feminine traits in the Jewish sphere allows for attributes to “blend,” as opposed to the blurring of gender we witness taking place in the secular world.

That said, the idea that women and men are not equal leaves me feeling challenged and confused. On the one hand, we know that women throughout history were subjugated in various ways. They had less freedom than men, were more susceptible to being overpowered by men, and were less likely to be valued for their intelligence. On the other hand, I don’t ever want to have to tell my daughters that they’re inferior to their brothers in any way.

As I’ve grappled with some of the most challenging aspects of women’s roles in Judaism as I became more religious, I’ve always fallen back on the fact that Orthodox women, by and large, are treated with tremendous respect in traditional Jewish communities. In the eighteen years I’ve been living in the Orthodox world, I’ve seen how women are valued in the religious world (with a few rare exceptions), and the greatest proof is in the pudding. But telling men that they have a higher status than women, and telling women the same seems like a surefire way to ensure more women will be taken advantage of, even though I know that this is not Kosman’s intention at all.

Kosman also attempts, unsuccessfully, to apply the “sun/moon inequality” model to explain some of the most difficult aspects concerning women and halachah—like why Jewish divorce gives men more control. Kosman says she did this because we’re supposed to try to understand the mitzvot to the best of our ability so that they’ll be more meaningful to us. While I agree with that sentiment, I am uncomfortable with the way Kosman tries to explain away complex issues:

The ketubah . . . may seem patriarchal, but it can also be seen as the valuation of the female voice and an awareness of its vulnerability . . . . In a Jewish marriage, man is cast an initiator—he commits and obligates himself to fulfilling her needs. This framework does not have to reflect her subordinate status; instead, honestly acknowledging the potential differences between men and women can provide the framework for mutuality and equality to flourish (p. 263).

Instead of attempting to explain certain inexplicable mitzvot, as Kosman does, which perhaps borders on justifying suffering, I personally am much happier living with ambiguity and with unanswered questions.

Allison Josephs is director of Jew in the City, which breaks down stereotypes about religious Jews and offers a humorous, meaningful look into Orthodox Judaism through the power of new media.