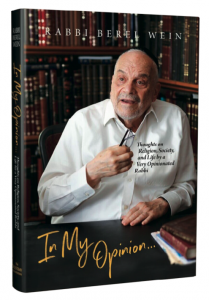 Rabbi Berel Wein’s extensive and prolific career has cast him into various roles in his life, among them, a lawyer, pulpit rabbi, rosh yeshivah, journalist and tour guide. In My Opinion: Thoughts on Religion, Society and Life by a Very Opinionated Rabbi contains an anthology of brief essays collected from his published writings, offering his opinion and insight on issues ranging from the most mundane life experiences to world politics and major news events.

As Rabbi Wein writes in his introduction, people are fascinating creatures with different perspectives; all progress is a result of diversity of opinion. “There is no doubt in my mind that if everyone agreed on everything and would not cross-pollinate the Jewish world with different opinions, Judaism and the Jewish people would not survive.” As a popular historian with a long and distinguished career, Rabbi Wein expresses opinions in this book from a vantage point uniquely his own, that of someone intimately familiar with Jewish history and at the same time involved and active in current Jewish affairs. Viewing life’s occurrences through the lens of history helps put things into perspective and allows for a refreshingly lucid approach that is rare in an era of sensationalism.

Writing of President Barack Obama’s statement that “America has Israel’s back,” Rabbi Wein expresses his belief that with this declaration, President Obama was now free, even compelled, to judge Israel, its policies and government from the lofty level of the high ground he had staked out. While acknowledging America’s historical support for Israel, he points out the many policies American presidents have adopted that have proven counterproductive to Israel’s interests. “The simple fact is that the trains and rails to Auschwitz were never bombed. Does anyone really believe that the United States will go to war on behalf of Israel?”

Pondering the ease with which Jews criticize El Al Israel Airlines’ service, Rabbi Wein reflects upon our loss of pride as a nation and how we take for granted that “Jews can pilot planes, own airlines, service their own meals, adhere to their own traditions and make it feel like home, even at 30,000 feet in the air.” He recalls a time in Poland when the Polish government allowed a railroad split to be built from Warsaw to the village of Gora Kalwaria, where the Gerrer Rebbe, the Imrei Emes, resided. This eighteen-mile track was used almost exclusively by the followers of the Imrei Emes, and, in a moment of tolerance, the government allowed this rail line to be manned by Jews, including Jewish conductors who collected the train tickets. Jews at the time were proud of the idea that a Jewish conductor had the ability to ask you to give him your railway ticket.

On the Value of Silence

Tackling the phenomenon of people who feel themselves expert enough to know God’s mind in matters such as the reasons for natural disasters, Rabbi Wein takes on these “experts” head on. Using the Holocaust as an example, he opines that those who advance explanations and the certainty of knowing Heaven’s will do so only at their own peril. “Silence and acceptance, rebuilding and revitalizing, staying the course, and being humble about all matters is the wisest course for believing Jews to take.”

A common theme in his writings in this volume is the need for unity between the various factions of the Jewish people. What is one’s responsibility to a community that does not meet one’s standards and expectations? In Israel, where this issue is ever relevant, the larger community has fractured and Chareidi society maintains little connection to the society at large or to the national agenda. Looking back in time, Rabbi Wein compares the situation to that encountered by Rabbi Samson Raphael Hirsch in nineteenth-century Germany. In Frankfurt am Main, Rabbi Hirsch “established his famous Austritt community. Austritt literally means to step out. Rabbi Hirsch’s community left the Reform-led Jewish kehillah and established its own independent kehillah in place of it. However, great rabbis disagreed with his approach, foremost among them Rabbi Yitzchak Dov Bamberger and Rabbi Azriel Hildesheimer. In Eastern Europe, the Netziv warned against following Rabbi Hirsch’s lead in the Lithuanian communities that were beginning to be dominated by secularists. He wrote strongly against separating from the general community.” Comparing it to the ongoing debate on Zionism today, Rabbi Wein hopes that we realize we are all together in the same boat in the middle of the voyage and that there is no option of “stepping out.”

Agree or disagree, you will find yourself “listening” to Rabbi Wein and hearing him out.

Rabbi Wein writes that in his view, the main issue facing world Jewry is its shrinking population. This is due to the ravages of assimilation and intermarriage, resulting from the failure of the non-Orthodox in the Diaspora to hold on to their youth in any meaningful manner. At the same time that these issues are neglected, “a glance at Jewish media would lead one to believe that the greatest issue that we must contend with today is where the Women of the Wall should be allowed to light their Chanukah menorah. There is no doubt in my mind that decades from now this currently important issue will have little resonance in the Jewish World.”

While you may already have heard many of the opinions you will find in this book, you’ve never heard them with such freshness, and with Rabbi Wein’s trademark wit and humble style. Agree or disagree, you will find yourself “listening” to Rabbi Wein and hearing him out. In My Opinion is a strong contribution to the ongoing discussion in contemporary Jewish literature on matters in life from the most commonplace to the most consequential. It is a unique and interesting addition to the range of books authored by Rabbi Wein.

Israel Mizrahi is the owner of Mizrahi Bookstore in Brooklyn, New York, home to over 200,000 second-hand and antiquarian books of Jewish interest.

An “Author” in History by David Olivestone

5 2 votes
Article Rating
This article was featured in the Summer 2021 issue of Jewish Action.