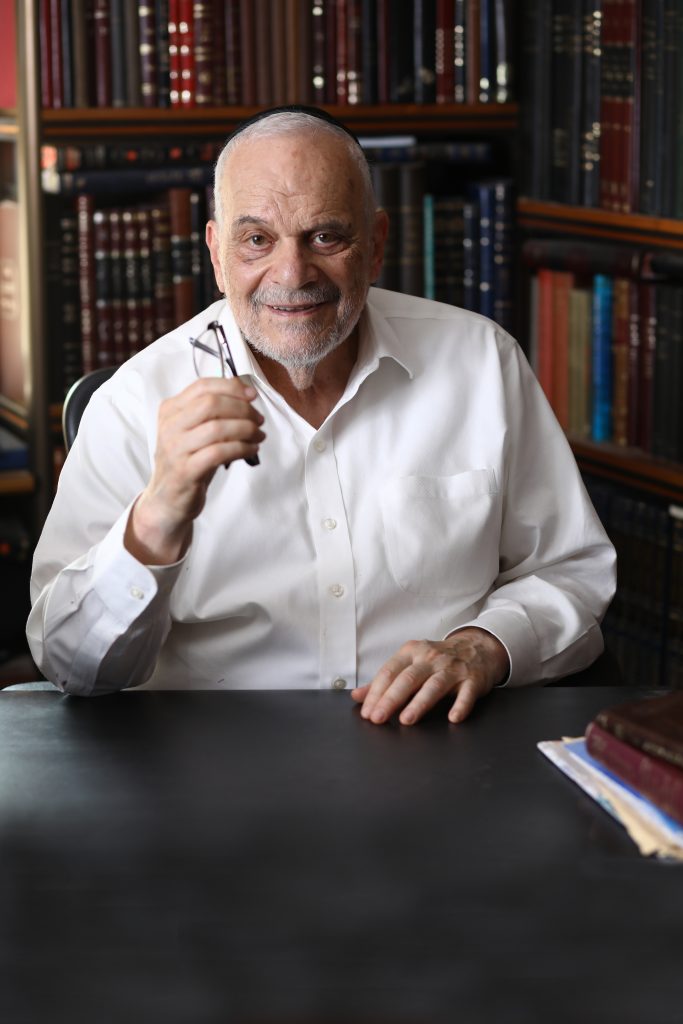 Communal rabbis are by definition leaders. Some lead one congregation with great loyalty and dedication for many years. Others share their talents and learning with a succession of communities as they move from pulpit to pulpit. Over the course of their careers, some speak to and influence hundreds, others thousands.

But there are a few who speak to hundreds of thousands, and some even to millions. These are the special individuals for whom the precincts of the synagogue and the ambit of the community are too confining. Blessed with extra doses of intellect, eloquence, creativity, personality and above all vision, they found organizations, create schools and launch movements. Each in his own way, these entrepreneurs of the Torah world make an impact which reaches far beyond their points of origin.

Such an individual is Rabbi Berel Wein.

Born in Chicago in 1934, he did not set out to be a rabbi, although he did stem from a rabbinical family. In 1955, the year he was married, he obtained semichah from the Hebrew Theological College, then on Chicago’s West Side and later in Skokie. But his father, who was the rabbi of a prestigious Chicago synagogue, told him sadly that he did not see much of a future for the Orthodox rabbinate in America and encouraged him to go to law school. Becoming proficient in real estate law, he soon opened his own law offices together with a partner, and also began investing in real estate.1

His material success did not distract him from his own learning and his involvement in the yeshivah world. Soon he was asked to serve as the part-time rabbi of the congregation to which he belonged and began giving numerous shiurim. “Even then,” he says, “I thought of myself more as a rabbi than as a lawyer.”

When another business venture turned sour, he was very open to a suggestion made to him by the rabbi of a congregation in Florida who was leaving for another pulpit. With the enthusiastic recommendation of Rabbi Chaim Kreiswirth, the head of the Chicago yeshivah, Rabbi Wein was invited to fill the position.

When he arrived at Congregation Beth Israel in Miami Beach in 1964, it was hardly a flourishing institution. One of the new rabbi’s first tasks was to raise enough money to cover his own “pretty measly” salary. But within a year his popularity grew and the membership multiplied rapidly. In addition, many winter visitors to Florida helped fill the shul, and before long, a spacious new building was dedicated.

Among the winter visitors were prominent roshei yeshivah, rabbanim, and communal leaders from all sectors of Jewish life and from all over America, who helped broadcast Rabbi Wein’s burgeoning reputation. As his stature rose, he began to be approached with offers of significant positions with major organizations, and in 1972 he accepted the post of executive vice president of the Orthodox Union, and the family moved to Monsey, New York.

He did not enjoy the job. The OU was understaffed and financially strapped, and his time was spent in administrative matters and meetings. He felt he was accomplishing little for Torah and the Jewish people, but he had signed a five-year contract, and was “grimly determined to honor it.” When Rabbi Alexander Rosenberg, the legendary head of OU Kosher, passed away in the autumn of 1972, Rabbi Wein replaced him and filled out the remainder of his contract in that position. But he had concluded that organized Jewish life was not for him, and says that he then “chose other ways of trying to help the Jewish people.”

Rabbi Wein’s hope, of course, which is a hallmark of all his teaching, is that by studying the patterns in our history, we will not repeat the mistakes of the past.

Soon after moving to Monsey, Rabbi Wein had begun giving Torah classes in his neighborhood, and once again his eloquence and his teaching skills resulted in his being invited to serve as the rabbi of a new local shul, to be known as Congregation Bais Torah. Starting with just forty families, it grew into one of the leading synagogues in the Monsey area.

He led Bais Torah successfully for twenty-four years, but that was far from his only involvement with the Monsey community. In 1977 he added the title of rosh yeshivah when he founded a yeshivah high school with a bet midrash program that gave semichah recognized by the Rabbinical Council of America as well as by the Israel Chief Rabbinate. He called the yeshiva Shaarei Torah, which had been the name of a yeshivah founded by his grandfather, whom he revered and whom he has sought to emulate throughout his life. In the twenty years that he led it, Rabbi Wein and a dedicated team of rebbeim and secular teaching staff educated hundreds of young men, many of whom went on to become distinguished rabbis and communal leaders.

Although Rabbi Wein needed to spend much of his time on fundraising, the second largest source of income for the yeshivah (after tuition) turned out to be a by-product of his great interest in Jewish history. This interest stemmed from his teenage days in the Chicago yeshivah. As he recalls it, “The yeshivah had a wonderful library with over 30,000 volumes, and it even had a professional librarian. We had an hour off for lunch which I would spend in the library. I had always wondered who the Ba’alei Tosafot were, who was Rabbeinu Tam and who was the Rosh. So one day, after a long halachic shiur on the Rosh, the librarian found a book on him for me and I was hooked.”

Rabbi Wein could hardly have realized how significant a moment it was when in the late 1970s he began teaching a Jewish history class for women in his shul. Soon enough, several of the men asked for a class on the same topic. Since a number of them were unable to attend regularly, they asked for the class to be recorded. As he puts it, “Thus was born Rabbi Wein’s history tape series.” Once sets of the tapes were put on sale, word spread rapidly of how fascinating they were, and orders began pouring in. All the income from the tapes went directly to the yeshivah. Eventually, his more than 700 audio tapes on Jewish personalities and Jewish history would sell over a million copies worldwide.

The taped classes demonstrate his masterful ability to make history come alive, as he recounts the dramatic, often sad events of the long Jewish story in an authoritative yet relaxed manner. His engaging style, his enthusiasm and his dry humor are contagious. But more significantly, evident in every lecture is his ability to interpolate pertinent references from Tanach, Talmud, midrashim, Chazal, mefarshim and Jewish tradition in general. And he misses no opportunity to bring the lessons of history home, drawing parallels between the historical events he is chronicling and current events in Israel or in the Jewish world at large.

The various series, now available to download, contain as many as thirty lectures in a set .2 They address events both chronologically—for example, the Biblical, ancient, medieval and modern eras—and topically—such as “The Golden Age of Sephardic Jewry,” “The Destruction of European Jewry,” “Judaism and the Majority Culture,” “The Lost Communities”—as well as biographies, the holidays, and on and on. “Jewish history,” he notes, “covers not only vast tracts of time, but huge areas. The Jews have penetrated almost all societies and left their mark on them. Writing a history of the Jews is like writing a history of the world.” To this he adds a postscript that characterizes his whole approach: “The effort to grasp history as it appears to the Jews produces illuminating insights.”

These insights suffuse the entire corpus of his teaching. A favorite theme is to trace what he calls patterns in Jewish history, which became the title of one of his books.3 “Even a cursory view of Jewish history,” he writes, “will reveal definite patterns that rise and fall regularly in the story of the Eternal People.” Among the patterns he identifies are acculturation and assimilation, messianism and mysticism, persecution and legends, fantasies and falsifications. His hope, of course, which is a hallmark of all his teaching, is that by studying the patterns in our history, we will not repeat the mistakes of the past. “God,” Rabbi Wein tells us, “says, ‘Let’s see what you’re made of.’”

The sheer volume and variety of his output are hard to grasp.

Rabbi Wein had already published two rabbinic works, so the transition from oral history to the written word was not hard. His first history book, Triumph of Survival, covering Ashkenazi Jewish history from 1648 on, appeared in 1990 and has been reprinted many times. This was followed by Herald of Destiny (1993), in which he dealt with the medieval period, Faith and Fate (2001), the story of the Jewish people in the twentieth century, and Echoes of Glory (2014), covering the period from the end of the First Temple Era to the times of the Geonim, as well as several other works.

The unique quality that characterizes these handsomely produced books, as opposed to so many other histories of the Jewish people, is that they are Jewish histories. “The irony of most Jewish history texts,” Rabbi Wein writes, “is that they have been written with condescension, if not hostility, to the basic beliefs and true heroes of Jewry over the centuries.” Unlike histories written by secular authors, Rabbi Wein points to an “Author” in history, “. . . Who guides Israel to its destiny.”4

The sheer volume and variety of his output are hard to grasp.5 Having pioneered the use of audio tapes in Jewish education in the 1970s, he created the Destiny Foundation in the new century to take advantage of new media. With a team of filmmakers, he produced animated videos on the lives of Rashi and the Rambam, as well as a series of documentaries on the events of the twentieth century, and other topics. For many years, Rabbi Wein wrote a weekly column in the Jerusalem Post, and he continues to send newsletters, a weekly blog and a podcast to thousands of subscribers. Many of these opinion pieces were recently collected in his latest book, In My Opinion (Destiny Foundation, 2020).

In 1997, Rabbi Wein and his wife made aliyah and set up home in Jerusalem. Predictably, he was soon asked to give shiurim in the nearby Beit Knesset haNasi, a well-known synagogue in the Rechavia neighborhood with many Anglo members. And unsurprisingly, history repeated itself yet again in 2002 when he was invited to become the shul’s mara d’atra, a position he continues to occupy today.

Now in his upper eighties, and despite impaired vision, Rabbi Wein still speaks and publishes on a myriad of topics, drawing on his formidable mind and memory to quote at will from Tanach, Shas and posekim. Long may he continue to inspire his congregation and his many thousands of admirers around the world.

5. His many other books include a Haggadah, an English commentary on Pirkei Avot, and illustrated histories of the Mishnah and the Talmud. Visit rabbiwein.com for a complete listing.

In My Opinion: Thoughts on Religion, Society and Life by a Very Opinionated Rabbi reviewed by Israel Mizrahi