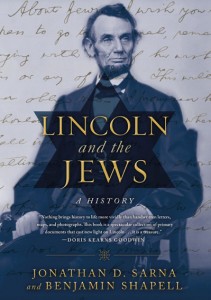 On Shabbat morning, July 4, 1863, in Mikveh Israel Congregation in Philadelphia, Sabato Morais, not knowing that the Union had been victorious in the Battle of Gettysburg and fearing for the safety of the northern cities, uttered the following prayer: “Encircle Pennsylvania with Thy mighty shield, protect the lives of her inhabitants.” However, mindful of July 4th, his sermon also recalled American independence as “the event which fourscore and seven years ago brought to this New World light and joy.”

Remarking on the similarity of the phrase in this sermon to the opening line of the Gettysburg Address which was delivered four months later, the authors of Lincoln and the Jews: A History write, “Whether Abraham Lincoln borrowed the phrase ‘fourscore and seven years ago’ from Morais for the commemorative address that he delivered at Gettysburg on November 19 cannot be known . . . . It is also possible that Lincoln read Morais’s sermon, which was published in the Jewish Messenger.” They proceed to prove that “other Morais speeches certainly made their way to the president.”

In this masterful volume that weaves an academic yet accessible narrative of Lincoln’s relationship with Jews and Judaism with documents and photographs from the Shapell Manuscript Foundation, Dr. Jonathan Sarna, the foremost expert on the history of Jews in America, and Benjamin Shapell, a great admirer of Lincoln and collector of his memorabilia, have brought this little-known aspect of American Jewish history to life. Through the presentation of fascinating anecdotes involving Lincoln and Jews of that time, this book answers the question raised by Shapell in his foreword, “Is there anything new to say about Lincoln?” with a resounding “Yes.”

The description of Lincoln’s relationship with his two closest Jewish friends exemplifies the contribution of the authors to the field. Abraham Jonas was one of Lincoln’s earliest friends and among the first to suggest that Lincoln be the Republican nominee for president in 1860. Born to an Orthodox Jewish family, Jonas subsequently married the daughter of Gershom Mendes Seixas, one of the leaders of Shearith Israel in New York City. A letter written by Lincoln is included in the book, dated “Springfield, February 4, 1860.” It describes Jonas as “one of my most valued friends.” Jonas is credited with convincing Lincoln to run for president in 1860, and he worked diligently to make sure that Lincoln was nominated by the Republican Party.

Lincoln’s closest Jewish friend after Jonas was a podiatrist and later a spy for the Union by the name of Issachar Zacharie. Historians have considered Zacharie one of Lincoln’s “most enigmatic intimates.” Yet Sarna and Shapell explain his background and his introduction into the inner circle of the president. Born in England, Zacharie provided conflicting stories regarding his immigration. However, Sarna and Shapell are able to uncover his arrival date as 1832, thanks to the surviving ship’s manifest. In 1862, with the Civil War raging, a plan was hatched (possibly by Zacharie himself) to establish a corps for the military “to inspect the feet of the men and keep them in order for marching.” In order to get authorization for this plan, William Cullen Bryant, long-time editor of the New-York Evening Post and a patient of Zacharie, wrote a personal letter of introduction to Abraham Lincoln, a copy of which is included in the volume. Zacharie met the president and in the course of five days treated him for back, foot and wrist problems. “Dr. Zacharie has, with great dexterity, taken some troublesome corns from my toes.”

Lincoln co-signed a testimonial to Zacharie and endorsed his work with the military. Indeed, his podiatric work soon evolved into a short-lived but complex spy mission on behalf of the Union, which Sarna and Shapell describe in vivid detail.

The willingness of Lincoln to embrace Jewish Americans in his inner circle, Sarna suggests in his introduction, parallels his efforts to abolish slavery and grant equality to black Americans. Sir Moses Montefiore of England linked Lincoln’s efforts to liberate slaves to his own efforts to liberate Jews from oppression. Two plays in Washington that the Lincolns are known to have attended, Gamea and Leah, also employed the theme of Jewish persecution in ways that contemporaries considered highly relevant to the condition of the blacks.

Lincoln’s relationship with American Jews continued to the very end of his life. Shot on the evening of April 14, 1865, Lincoln was taken, unconscious and bleeding, to a boarding house across the street. Around him gathered family, friends, cabinet members and, of course, doctors. One of the doctors was Charles H. Liebermann, a Russian-born Jewish surgeon who was “for over twenty years the leading oculist in Washington.” Upon arriving at the president’s bedside, Liebermann poured brandy down the president’s throat, removed hair from the wound area and diagnosed the gunshot as fatal. He joined the other doctors in pronouncing the death of the president: “The president is no more.” News of the president’s death spread quickly and the Jewish Messenger reported that it reached the Jewish community as they were “proceeding to their places of worship for the services of the Sabbath of Passover.” In San Francisco, Elkan Cohn of Temple Emanu-El was handed a note with the news just as he was “ascending his pulpit to deliver the usual sermon . . . he was so overcome that, bursting into tears, he sank almost senseless.”

The willingness of Lincoln to embrace Jewish Americans in his inner circle, Sarna suggests in his introduction, parallels his efforts to abolish slavery and grant equality to black Americans.

After Lincoln’s death, Jews eagerly participated in the memorialization of the president. The renowned Jewish artist Solomon Nunes Carvalho produced a magnificent allegorical painting of Lincoln in 1865. It is the only known painting of him by a contemporary Jew and a photograph of the painting is included in the volume. Even the image of Lincoln for the penny in 1909 was designed by a Jew, an Eastern European immigrant named Victor David Brenner. The final image in the book is the United States penny with the image of Abraham Lincoln.

The final paragraph in the volume highlights the special character of Lincoln in contrast to many of his contemporaries. “Others who similarly watched the Jewish presence in America expand, including members of Lincoln’s own inner circle, displayed overt prejudice, sometimes generalizing about Jews as a class. Lincoln never did. Instead, influenced by the Jews who[m] he befriended, he took account of Jewish sensitivities. His rhetoric and actions exemplified for Americans what it meant to embrace Jews as trusted leaders.” Abraham Lincoln provided an exemplary model for politicians and leaders to this very day.

Rabbi Adam Mintz is the founding rabbi of Kehilat Rayim Ahuvim on the Upper West Side of Manhattan and an adjunct assistant professor of Jewish studies at City College of New York and Queens College.