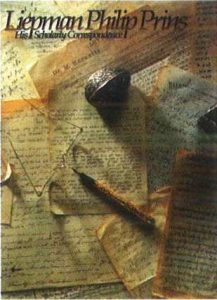 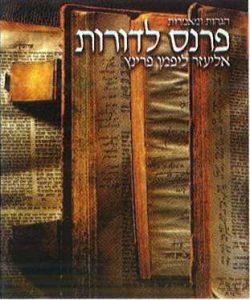 Until now very few have heard of Reb Eliezer Liepman [Liepman Philip] Prins.  Some may have seen his notes to Tractate Chulin of the Vilna edition of the Talmud.  We know little concerning this unique personality who was a scholar and owner of a library in excess of 6,000 volumes, and who corresponded with the greatest rabbis of his time, including Rabbi Yaakov Ettlinger, Rabbi Samson Raphael Hirsch, the Netziv, Rabbi Chaim Berlin, Rabbi Yitzchak Shmelkish, Rabbi Shlomo HaKohen of Vilna, the Chofetz Chaim, as well as with the leading scholars of the time such as Solomon Buber and A.A. Harkavy.  With the publication of these two huge volumes, we discover the greatness of the man.

Eliezer Liepman was born in 1835 in Arnhem, a small village in eastern Holland.  The community contained about 300 Jews; Yoel Franfort served as the rabbi.  Here the young Eliezer was raised, attended the general school and lived for 41 years, where he became a great talmid chacham, fully knowledgeable of Tanach, both Talmudim, rishonim, achronim, piyyutim, grammar, halachah, the minhagim of Israel and also works of research.

Let us picture a boy in a small town in Eastern Europe or America, who never studied in a yeshivah, and yet he becomes a well-known talmid chacham who disputes with the greatest rabbis of the time concerning the fitness of a lulav and the most complex topics in the Talmud.  He received seven letters from the Chofetz Chaim, who sent him a number of his own works and who blesses Reb Eliezer Liepman warmly and signs off, his “friend, Yisrael Mayer HaKohen.”  The Chofetz Chaim answered in matters of Kodoshim and revealed unknown facts about the publication of the Mishnah Berurah.  All this is contained in the first volume, Parnas L’Doro.

Reb Eliezer managed a family carpet business for many years.  He served as a mohel and established an association of mohelim; he labored on behalf of Eretz Yisrael.  He spoke to Baron Karl Wilhelm Rothschild of Frankfort about the Chofetz Chaim and the baron sent the Chofetz Chaim 5,000 marks annually, considered a large sum in those days. 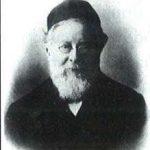 The editors, Mrs. Els Bendheim (Reb Eliezer Liepman Prins’ granddaughter) and Rabbi Dr. Mayer Herskovics, assisted by Rabbi Neria Gutel, have made a significant contribution in gathering all of the Hebrew writings and correspondence of Reb Liepman Prins with the scholars of his day.  The two volumes under review are magnificent in their outward beauty and in the meticulous scholarship invested by the editors.  They are reflective of love and respect for their subject.

I was not born in Holland, but I did grow up there, attended general school and studied with Jewish teachers.  Dutch Jewry possessed positive characteristics not found in most of the communities in central and western Europe.  There were no Reform communities; the communities were unified, as were the rabbis.  But Torah learning was not a strong point. Eliezer Prins was raised within this “weak” Judaism, and the fact that such a Jew was able to develop there makes one pause to ponder the powerful latent forces which must have been present.  The atmosphere was not one of unremitting devotion to Torah study and yet a young person arose to demonstrate the possibilities hidden within a serene Dutch Jewry, which knew neither wars nor pogroms.

Reb Eliezer Prins saw in Rabbi Samson Raphael Hirsch his educational guide, and consulted with him on the establishment of a school in Amsterdam, patterned after the school established by Rav Hirsch in Frankfort.  At the age of 41, Prins moved from Arnhem to Amsterdam and ten years later – in 1887 – two years before Rav Hirsch died, he moved to Frankfort.  The subsequent years were devoted to study, to writing and to enlarging his library.  Reb Eliezer had strong yearnings for the Land of the Patriarchs and set off for the Holy Land, but was forced to return due to his wife’s illness.  He helped in the acquisition of Rav Yaakov Emden’s Shas for the Romm Vilna edition of the Shas, which included the latter’s notes and emendations.  This is mentioned in the “Final Word” of the Vilna Shas, page seven.

When the Zionist movement arose Reb Eliezer joined, an unconventional step among the Frankfort Orthodox.  He openly supported the movement and published his view in a number of articles.  He saw well the dangers of assimilation in the Diaspora and therefore supported the new movement.  He was pained that many of the Zionist leaders were not observant.  Almost 100 years ago he wrote that he was certain that the non-observant of the present would become baalei teshuvah in the future, and that they or their children who returned to Eretz Yisrael would don tallit and tefillin.  He pointed out that in the time of King Achaz, the people were not fulfilling the mitzvot, yet in the days of Hezekiyah, his son, all Jewish children were even familiar with the laws of tumah and taharah.  Reb Eliezer wrote that the Zionist leadership will recognize that it is possible to speak of a Jewish State only if its inhabitants are observant of Torah and mitzvot.

Parnas L’Doro contains Prins’ correspondence with the great scholars of his day; Parnas L’Dorot contains his notes and comments on a vast range of sefarim with which he was occupied.  Besides his preoccupation with printed works, Reb Eliezer also worked on manuscripts.  He purchased the commentary of Reb David Abudarham to the Yom Kippur service, and in 1900 published the Sefer Tashlum Abudarham, which also included piyyutim and selichot by a number of medieval poets, all with the commentary of the Abudarham.  Reb Eliezer wrote notes and annotations as well as an extensive introduction to this work.

Though not a rabbi, he attained a high level of scholarship and an unusual breadth of knowledge and was a true talmid chacham.  Though occupied with derech eretz, he did not neglect the Torah and he serves as a shining example of a lifestyle which could be successfully emulated by many.  The success of his approach is also demonstrated by his many descendants living in Europe, America and mainly in Israel, who occupy positions in the whole gamut of human endeavor, the majority of whom have continued to follow in his path.

Yona Emanuel is the editor of Hamayan and the author of Dignity to Survive:  One Family’s Story of Faith in the Holocaust (Targum/Feldheim, 1998). Review translated by Matis Greenblatt.