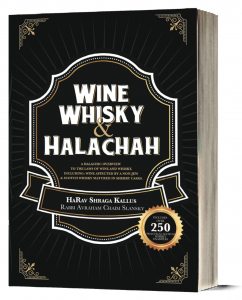 At this time of year, with the upcoming obligation to drink the Four Cups at the Seder, the OU Kosher hotline is generally inundated with hundreds of callers asking a variety of questions about one topic in particular: wine.

While the kashrut of wine has always been complicated, Rabbi Shraga Kallus and Rabbi Avraham Chaim Slansky expertly elucidate this subject in their book Wine, Whisky and Halachah. Rabbi Kallus, well known as an expert in halachah, has delivered thousands of shiurim on halachic topics, which are available online. His shiurim delivered at the Second Seder Kollel in Jerusalem form the basis of this sefer. The halachic rulings are clearly presented and some contain charts. Source texts and detailed references are provided for those who want to delve deeper.

Wine, Whisky and Halachah explores the intricate laws and reasons for the prohibition of drinking stam yeinam, wine which may have been poured for an idolatrous service. [In Mishnaic times, a popular pagan ritual consisted of pouring off a little wine from every bottle in honor of an idol. Because it was difficult to know with certainty which bottles of wine were used for an idolatrous service, the rabbis decreed that wine produced by a non-Jew, or even kosher wine left unattended with a non-Jew, is forbidden because it may have been used for idolatrous purposes.]

The book features questions such as: When does the handling of wine by gentiles affect the wine’s status? And, exactly who affects the status of the wine? Interestingly, the answers to these questions may surprise some readers. The various differences of opinion are explained in a clear way without overwhelming the reader.

Case scenarios are also provided, with guidance on how the halachot should be applied. For example: what should a chatan do if a non-observant Jewish photographer pours wine that is not mevushal (cooked wine is not subject to the strictures of stam yeinam) during his chuppah? Should he refuse the wine and risk embarrassing the photographer or should he drink the wine? (The authors make a strong case that it is permissible to drink the wine to avoid embarrassing a fellow Jew.)

One important point addressed in the sefer could benefit from further clarification. The authors discuss whether pasteurized wine qualifies as mevushal. They present two important arguments as to why the modern pasteurization process does not meet the criteria of changing the wine’s status to mevushal. Firstly, they cite Rav Shlomo Zalman Auerbach’s position that the pasteurization process causes almost no change in the quality of the wine; because of this, Rav Auerbach contends that pasteurized wine cannot be considered mevushal. Secondly, they cite the ruling of Rav Ben Zion Abba Shaul, who asserts that pasteurization does not make the wine mevushal because the cooking process according to him would require that the quantity of the wine be diminished in some way. Because pasteurization takes place in sealed pipes, the quantity of the wine is not diminished.

Unfortunately, the authors fail to present any arguments as to why pasteurization could be considered acceptable in rendering the wine mevushal, except to note that “the accepted practice in the world is to be lenient. This is clear as all the hechsherim write that wine is mevushal even when it is merely pasteurized.” In the summary section, the authors make their own position clear: Despite the fact that this leniency is universally accepted among kosher certification agencies, they do not feel it is justified. I have two concerns regarding the authors’ position. First, at the very least, they should have noted the explanation of Rav Ovadia Yosef (Yabia Omer, YD 8:15) who addresses their concern regarding the modern pasteurization process. Similarly, OU posekim Rav Yisroel Belsky, zt”l, and ybl”c Rav Hershel Schachter also ruled that this process suffices to render wine mevushal, and their halachic views should have been included as well. The authors incorrectly surmise that Rav Moshe Feinstein would not have accepted this leniency. However, the modern pasteurization process was used in Rav Moshe’s days as well, and it is well known that he approved of pasteurized wine qualifying as mevushal.

When noting the strict positions of Rav Shlomo Zalman Auerbach and Rav Ben Zion Abba Shaul, the authors should have made it clear that one who is lenient in this matter is following the accepted ruling (of course, it is meritorious to be stringent).

Second, the authors state “it is not necessarily the correct approach to buy mevushal wine and allow non-Jews free access to deal with the wine.” This is inconsistent with their halachic ruling on the pasteurization process. If they truly believe mevushal wine does not have the status of mevushal, then it should be treated as non-kosher since presumably it was already handled by non-Jewish workers. It is often the case that once wine has the status of mevushal, non-Jewish factory workers are allowed to touch it. Therefore, if one wishes to be stringent, one should only buy non-mevushal wine, so as to be sure that the wine was not handled improperly at any point in the wine-making process.

The second half of the book deals with another very popular topic: the kashrut of whisky. Whisky aged for many years in wooden casks yields a deep, smooth flavor. Often, however, these casks were previously used to age sherry, a type of wine. When non-kosher sherry is matured, the taste of the wine is absorbed into the walls of the cask. Subsequently, if whisky is aged in the same cask, the whisky will absorb the taste of the sherry. According to some posekim, one can be lenient in such a case and rule that the whisky is kosher as the wine is only absorbed into a thin layer of the barrel. And since wine is nullified into other beverages at a ratio of one to six, we certainly have enough whisky to nullify the sherry. Even assuming that the sherry is absorbed into the entire thickness of the cask, some posekim maintain that as long as the sherry is not detectable in the taste of the beverage, that serves as a basis for nullification. However, the approach that the authors follow is very similar to that of Rav Belsky (and is the position followed by OU restaurants and caterers), which is that one should not rely on leniencies when it is known that the whisky was stored in wine barrels. The authors provide an extensive list of 250 Scotch whiskys and their carefully researched halachic status, demonstrating how such information is easily available to anyone who wishes to find out whether a particular whisky was aged in a sherry cask. In fact, the OU certifies more than twenty Scotches.

Sherry is considered a fortified wine, i.e., wine alcohol has been added to it, such that it contains roughly double the regular alcohol level of wine. There is a halachic difference between wine and wine alcohol. Wine alcohol is absorbed into the entire thickness of the barrel and is only nullified in sixty parts. It is questionable whether sherry should be treated as a wine or as a wine alcohol. If the latter, there would be very little basis for permitting one to drink whisky aged in sherry casks.

Especially at this time of year, when questions about the status of wine are most pertinent, I highly recommend this well-researched sefer to anyone interested in the complex and often confounding halachot of wine.

Rabbi Eli Gersten works for OU Kosher as the recorder of pesak and policy. He lives with his wife and children in Passaic, New Jersey.