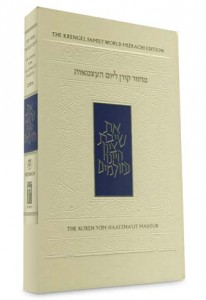 There is a long and not especially successful history of attempts to popularize a Yom Ha’atzmaut machzor for the English-speaking world. In 1964, Mr. Armin Krausz of Sheffield, England, arranged for such a machzor to be published by Routledge. The then chief rabbi of Great Britain and the Commonwealth, Rabbi Israel Brodie, was asked to approve it for use in synagogues under his authority, a request which he turned down.

In 1972, his successor, Rabbi Immanuel Jakobovits, was asked to endorse a second edition of the machzor. He declined to do so, but instead agreed to write a foreword to the new edition. Rather than offer an endorsement, Rabbi Jakobovits took issue in the foreword with the fact that the machzor reflected solely the halachic views of the Chief Rabbinate of Israel, and therefore differed considerably from the way in which Yom Ha’atzmaut had begun to be observed by Zionist congregations in the Diaspora.

Chief Rabbi Jakobovits endorsed celebrating Yom Ha’atzmaut as a religious occasion, “. . . but with reservations that distinguish it from the established cycle of festivals in the Jewish calendar.”The publishers declined to print the foreword as submitted, which turned out to matter little, as the machzor never caught on. Other attempts have apparently been made over the years; in preparing for the move to the new Lincoln Square Synagogue building three years ago, boxes containing hundreds of copies of another unsuccessful Yom Ha’atzmaut machzor were discovered in the old building. They had never been used.

Will this very well-produced, thorough and absorbing work succeed in its creators’ aim of becoming an accepted prayer book for use in Modern Orthodox congregations? It remains to be seen.

The volume is made up of two parts. The first is a siddur, which like any other machzor, contains all the prayers from Minchah Service on the eve of the holiday to Ma’ariv at its conclusion. (A separate section includes prayers to be recited on Yom Yerushalayim.)

The second part of the volume is a collection of twenty-five essays penned by some of the luminaries in the Religious Zionist world, including Rabbi Jonathan Sacks, Rabbi Hershel Schachter and Rabbi Mosheh Lichtenstein. Significantly, some of the essays are by authors whose works are only rarely translated into English, such as Rabbi Shaul Yisraeli, z”l and Rabbi Zvi Yehuda Kook, z”l. The essays deal with many topics connected to the Land of Israel and the State of Israel, as well as observations on the observance of Yom Ha’atzmaut and
Yom Yerushalayim.

These essays are uniformly well produced and edited, and as a unit make up one of the most important works in the English language on Religious Zionism.

It is, however, as a siddur that the work is presented, and by which it will ultimately be judged. The siddur is in the standard, beautifully produced Koren format with the English translation on the right-hand page and the Hebrew on the left. The translation is by Rabbi Jonathan Sacks, but an entirely new commentary has been written by Rabbi Moshe Taragin and Rabbi Binyamin Lau, linking wherever possible the prayers with the themes of Yom Ha’atzmaut. But, of course, the point of a machzor is to conveniently bring together those prayers that are not said on a regular weekday or Shabbat and to provide guidance for the less-familiar parts of the liturgy. The Koren Mahzor for Yom Haatzma’ut follows, in the main, the liturgy recommended by the Chief Rabbinate of Israel for Yom Ha’atzmaut, but with a number of optional extras included. A halachic discussion of such questions as when Tachanun is to be recited at Minchah on erev Yom Ha’atzmaut (depends what time Minchah is being said) and whether Shehecheyanu should be said on this day (preferably should not) are included.

But it is in the liturgy itself that the biggest surprises are to be found. For example, a suggested text for Al Hanissim to be recited in the Amidah prayer is included. No compelling reason for its inclusion is given, other than to quote authorities who assert that there is nothing to forbid it. Indeed, the editors themselves concede that it is “commonly omitted.”

This and the inclusion of other prayers such as Hallel with a blessing as part of the evening service, the full Pesukei D’zimra usually recited only on Shabbat and yom tov, Torah Reading even for a Tuesday or Wednesday, a haftarah, et cetera, all serve to highlight something fundamentally discordant about this otherwise very welcome work: it does not reflect the usage and liturgy of the communities to whom it is being marketed.

While Dati Leumi shuls in Israel mostly follow this nusach on Yom Ha’atzmaut, the same cannot be said for shuls outside of Israel. Machzorim exist so that prayer services can proceed smoothly and without interruption or confusion. I cannot think of more than a handful of shuls or schools around the world that would follow the prayers—from beginning to end—as presented. The authors have chosen to include a “maximalist” offering of Yom Ha’atzmaut prayers, and not one that reflects at all the typical service in the vast majority of communities around the world. At the end of the day, what saves the work is the superb and very worthwhile collection of essays that makes up the other half of the machzor. Will this publication find the necessary foothold in institutions that will make its fortune different from so many previous efforts? I hope so. While writing this review, two copies of the machzor arrived at my apartment, gifts for my recently Bat Mitzvahed twin daughters. I hope they will make good use of at least substantial parts of this very well-produced volume.

Rabbi Shaul Robinson was born in Glasgow, Scotland. He has been senior rabbi of Manhattan’s Lincoln Square Synagogue since 2005.