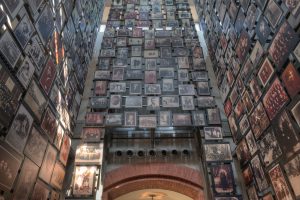 “The Tower of Faces” or “The Tower of Life” at the United States Holocaust Museum in Washington, D.C. Courtesy of Wikimedia Commons

There Once Was a World
A 900 Year Chronicle of the Shtetl of Eishyshok
By Yaffa Eliach
Little Brown & Co.
Boston, Mass., 1998
818 pages with illustrations

A few years ago, I had the opportunity to visit Professor Yaffa Eliach in her home.  It was then that she mentioned that she was writing a book about Eishyshok, the shtetl in which she was born and raised.  I was particularly interested in the publication of this work as my own paternal grandmother was born in Eishyshok and lived there until she emigrated to the United States during her mid-teens following World War I.

a few miles from the Chofetz Chaim’s Radin and 40 miles from Vilna, Eishyshok was one of the finest of hundreds of European Jewish shtetlach, small towns of a few thousand Jews which dotted the European landscape.  It was the personification of the Litvak way of life, a citadel of Jewish learning and piety, led by a long line of outstanding and brilliant rabbis.  The Chofetz Chaim was a graduate of its famous yeshivah.

There Once Was a World has been 19 years in preparation.  A book of over 800 pages, it was lovingly written by one of the few survivors of the German murder of all 5,000 Jewish residents of Eishyshok, in September of 1941.  The book is fascinating, extremely well-written and documented, with copious notes and photographs.  It is encyclopedic in scope, touching on every aspect of Jewish life.  Each chapter is a gem: rich, colorful and filled with depth, information and insight including history, biography, anecdotes and local color.  While the book concentrates on Eishyshok, in a larger sense it tells the story of both Lithuanian and European Jewry.

The breadth of the book is apparent from a glance at the table of contents. No aspect of life — religious, educational, economic, political or social — is omitted.  There are full chapters on: the synagogue and Beth Medrash; Rabbis and Rebbetzins; the Maggid, the voice of the people; The Dayan, the voice of justice and compassion; The Shamash, faithful servant of God and community; The Chazan, Ba’al Tefillah and Zogerke, leading the congregation in prayer; The Shochet, a steady hand and a righteous heart; and much more.

Professor Eliach’s detailed research took her from family attics on six continents to state archives no scholar had seen since the start of the Cold War.  Confronted with the near total disappearance of the world of the shtetl, Professor Eliach was indefatigable in her search for records, photographs, documents and artifacts.  The assembling of the mountain of materials was daunting, and was pursued at great personal expense.  “For one photograph of the Market Square on market day,” she recalled, “I paid with a color TV, a VCR, a radio, 4 jogging suits and 4 pairs of Reebok sneakers.”

Access to family letters, memorabilia and interviews with survivors provide startling insights into one of history’s most troubling questions:  Why were Europe’s Jews so blind to the Nazi threat?  The scholarly rabbi of Eishyshok urged the leaders of the community to go down fighting, but his laymen were convinced that the reports of massacres were scare propaganda.  In Eishyshok, Dr. Eliach learned, as in hundreds of communities in Eastern Europe, the German occupiers of World War I had been so civilized that no one could believe that their sons would be any different.

Her research of family life, shows that “the world of our fathers” was actually a world in which almost all the affairs of daily life were run by mothers.  Her profound accounting of medieval history highlights her description of early Lithuania, the last pagan country in Europe and the only one where Jews lived on equal terms with the rest of the population.

If you had met my grandmother, you would know that the general description of Litvaks is accurate.  Professor Eliach put it beautifully:  The Lithuanian Jews, in particular, held fast to the qualities that made them unique.  No matter where the latest national boundaries lay or what flag flew above them, they remained within the fixed, permanent borders of their cultural identity.  To be  a Lithuanian Jew – a Litvak – was to have values and cultural ideals that set you apart not just from your non-Jewish neighbors but from the Polish Jews, the Chassidim and the Jews who lived in the Pale of Settlement.  The Jews of Eishyshok were the very embodiment of those with Lithuanian characteristics – sharpness of intellect, pungency of wit, a deep dedication to scholarship, intense religiosity, stubborn self-sufficiency, and an unceasing industriousness – especially during the shtetl’s last four centuries.  They were to remain so even under the influence of Polish Jewry, which had an even greater impact from the sixteenth century on.

If we read history not only to discover our roots, but to find answers to contemporary issues, we must examine how the book grapples with the issues of modernity, Socialism, Communism, secularism, the Haskalah and Zionism.  It offers many keen insights and answers, but often one hopes for more.  For example, there is no specific chapter on Jewish Communism or the Isvetskia, the Communist Jewish propaganda wing which was so vicious in its determined campaign to obliterate every remnant of Jewishness wherever the Hammer and Sickle held sway.  Unquestionably, answers are offered as to why Communism so magnetically drew Jews from religious backgrounds, why even many children of rabbis became its rabid enthusiasts.  We know of the deep and biting poverty, the stratification of society into the haves and have-nots, the constant wars, pogroms, epidemics and anti-Semitic measures which battered families, destroyed businesses and often uprooted whole communities.

Paradoxically, while the Lithuanian yeshivot remained strongholds of Torah (even though the Haskalah and Communism did penetrate them to a degree), large percentages of the masses abandoned the Torah life of their parents.  The question must be asked:  Why did so many Jewish sons and daughters turn into the most vicious haters of Torah and its way of life?  Why was traditional Jewish society, despite its brilliant and talented Torah leadership, unable to meet the challenges of political, social and economic change?  Why were the radical left wing Zionist youth movements so successful in drawing Jewish youth away from their parents’ traditions and homes?

I do not suggest that the book does not deal with these issues.  Indeed, the decline of Jewish Eishyshok between the two World Wars was wrenching and shocking.  This was a Lithuanian town which had long been a citadel of Torah and had produced some of the very greatest and most talented leaders of Torah Jewry up to modern times.  It would be a mistake to say that there was no leadership or creativity.  Indeed, there were giants such as the Chofetz Chaim, who fought back valiantly.  Yet, despite their heroic efforts, the overwhelming majority of Lithuanian Jews abandoned the Torah way of life; while to cite a glaring example, the opposite was the case in other areas, especially in smaller communities where Chassidism successfully held sway.

It very well may be that an exhaustive, in-depth study of these issues was beyond the scope of Professor Eliach’s book.  Yet, one could think of no scholar who is better equipped to provide it, as she is a professor of history and literature in the Department of Judaic Studies at Brooklyn College, specializing in East European History, Holocaust Studies and Chassidism.  It would be my hope, that having completed this magnificent project, Professor Eliach would now undertake a new project, one which would have so much value and meaning for the American Jewish community.  While it would be unfair to draw parallels between pre-war Lithuanian and contemporary American challenges to Torah life, as the circumstances and variables are so radically different, nonetheless, I could not but hope that there are many lessons to be learned.

Rabbi Pinchas Stolper, a well-known author and speaker, is the founder of the National Conference of Synagogue Youth and Senior Executive of the Orthodox Union.