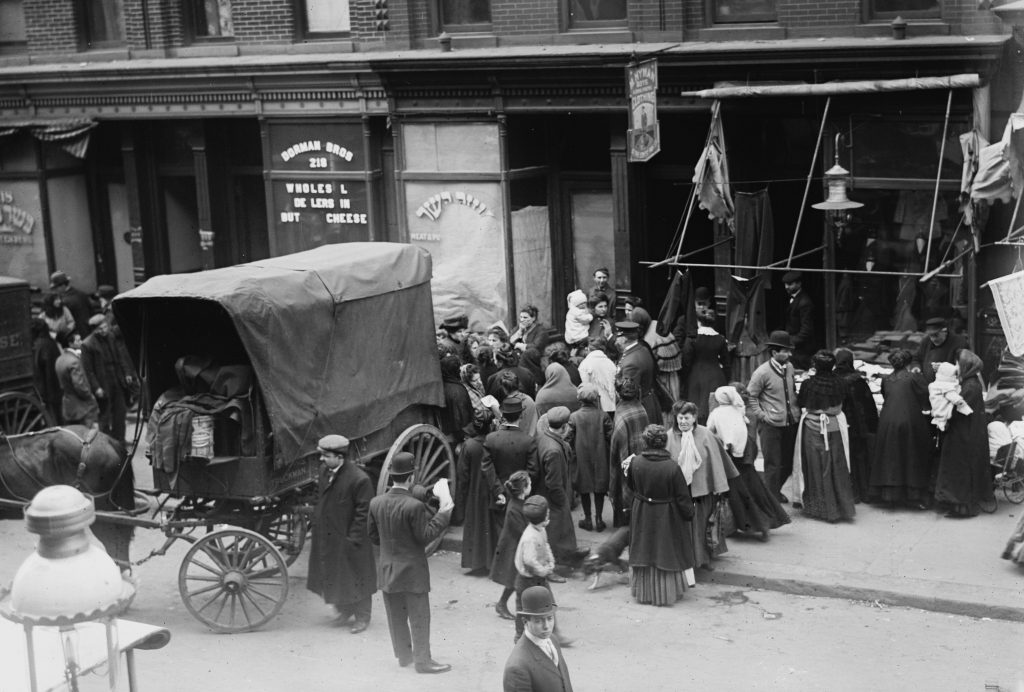 In 1902, in response to a coordinated increase in the price of kosher meat from 12 to 18 cents a pound, American Jewish women launched a boycott against New York City kosher butchers. Due to the increase, many Jewish families could no longer afford to buy meat. Photo: The Protected Art Archive/Alamy Stock Photo

“Howling Mob Turns on Rabbi,” a headline in the New York Sun announced one spring morning in 1906. Antisemites? Street hoodlums? The sub-headline added to the mystery: “Trouble Arose When the Rabbi Decided to Bake Matzoths.” Angry neighbors? Extreme Jewish secularists?

The tumult in the synagogue on Willett Street on the Lower East Side was, in fact, the result of an intra-Jewish struggle over the control of the Passover food market. Such turmoil was an all-too-frequent manifestation of the chaotic state of kashrut supervision in early-twentieth-century America, which helped galvanize the rise of the Orthodox Union’s best-known communal service.

The writings of Rabbi Moses Weinberger provide a fascinating glimpse of kosherfood issues in New York City in the late 1800s and early 1900s. In 1887, the young Hungarian-born rabbi wrote (in Hebrew) Jews and Judaism in New York, a book that offered a gloomy assessment of Jewish life in the new world.1

Back in Europe, Rabbi Weinberger recalled, Jewish communities were sufficiently small and tight-knit to ensure adherence to the highest standards of kashrut. “Every stone had seven eyes!” he wrote. “People knew everything that was done and said, even behind closed doors. Not even the stupidest butcher or a non-Jew could make any problems . . . ” In America, by contrast, there was no central system or agency for kashrut supervision. Individual butchers, bakers and grocers claimed their goods were kosher but there was no method of verification. A certificate in a shop owner’s window could declare the establishment was kosher without supplying the name of a supervising rabbi. Or it could include the name of a rabbi or “reverend” who might or might not be qualified for the task. Rabbi Weinberger described meeting shochtim who looked as if they had learned the techniques of ritual slaughter “while standing on one foot, a month before they left their native lands [in Europe].”

A New York State law enacted in 1915 prohibited selling as kosher any meat that was “not sanctioned by the Orthodox Hebrew religious requirements.” Yet ten years later, the city’s Commissioner of Markets still estimated that 40 percent of the “kosher” meat sold in New York was actually treif.

Who Was to Blame?
Even well-intentioned shochtim simply were in over their heads, rabbinical critics contended. After his first visit to the United States, Rabbi Yaakov David Willowski, better known as the Slutsker Rav and later as the Ridbaz, wrote scathingly in 1904 of the state of kashrut there. Typical of the sad situation was a shochet whom he described as having to single-handedly slaughter 2,000 chickens every Thursday and Friday in order to make a living; the labor left him so exhausted by Friday night that he could not even lift his fork at dinner and had to be fed by his children.

Another part of the problem, according to the Ridbaz, was that some kosher consumers had grown careless. Struggling to survive in the face of poverty and overcrowding, many immigrant housewives were no longer as scrupulous as they would have been in the old country. He cited what he said was a well-known saying: “Az men ruft ihm Mendel, meg men essen fun zein fendel.” (“If his name is Mendel, you may eat from his pot.”) As a result, the Ridbaz concluded, America was “a treif land where even the stones are impure.”2

Turf Wars
Since there was no central authority, the supervision of slaughterhouses, factories, bakeries and shops fell to individual rabbis. For underpaid and overworked turn-of-the-century American Orthodox rabbis, kosher supervision was often a major source of income—and sometimes a major source of conflict.

Professor Jeffrey Gurock has written of kosher-supervising rabbis who, “holding to their jobs for dear life,” fought vigorously to fend off competitors. Especially fierce struggles were waged in the early 1900s in cities such as Boston, Massachusetts, and Paterson, New Jersey, with the latter community finding itself with two rival “chief rabbis” in 1906.3

When the Ridbaz returned from Europe to head a consortium of Orthodox synagogues in Chicago, a prominent rabbi accused him of coming to the city “to rob my rights, to trespass upon my property, and to cut off my meager sustenance.” The rhetoric in such disputes could be quite stinging. “The first time he was in America, we heard him say that even the stones in America are treifa,” the rabbi wrote of the Ridbaz. “Now that he has returned to America, the stones have become kosher and ritually pure, although they have not been purged or immersed in a mikvah.”

Ten years later, the city’s Commissioner of Markets still estimated that 40 percent of the “kosher” meat sold in New York was actually treif.

The competition occasionally escalated beyond rhetoric. It was Rabbi Moses Weinberger whose challenge to the kashrut status quo made him the target of the aforementioned “howling mob” at the Willet Street shul. His offense? Trying to secure a piece of the local Passover matzah supervision business, over which a member of his congregation had a monopoly. When Rabbi Weinberger stepped up to the bimah on the final day of Pesach in 1906, there was so much “shouting and screeching” from supporters of his matzah-supervising rival that the police were summoned, the New York Sun reported. The policemen initially managed to repel the protesters, but “more serious trouble developed” when “the women members of the congregation, who are separated from the males and sit in the gallery during services, violated custom and made for the ground floor.” The officers “lost their helmets and buttons” as they were overwhelmed by “a swirling mass of humanity.” The riot stopped only when Rabbi Weinberger announced his resignation. (Or, as the Sun put it, “Rabbi Weinberg [sic] calmed the agitators by telling them that he would soon get a new church.”)

An editorial in a local Orthodox weekly newspaper, the Hebrew Standard, pointed out with dismay that it was not the only recent eruption of violence in the community. “Such occurrences . . . happen with too much frequency among our Orthodox brethren,” the editors complained, noting that there had been “a hand to hand fight between two East Side rabbis” not long before. The editors connected such behavior to the growing problem of assimilation, arguing that “it is not surprising” that “the young generation refuses to attend a synagogue, the officials and members of which are devoid of all sense of decency and respect.”

For the editors of the Hebrew Standard, a generational conflict was at least partly to blame for the turmoil in the Orthodox community. “The average old-fashioned Orthodox rabbi, hailing from Eastern Europe, always boasts of his learning and lamdonus,” they wrote. “It would be far better if he bore in mind the maxim of [Ethics of] the Fathers: ‘Where there [are] no manners, there is no Torah.’”

Questionable supervision was not the only problem plaguing the world of American kashrut in the early 1900s. Lax government oversight of the meat industry (memorably depicted in Upton Sinclair’s famous novel The Jungle) enabled a handful of major meatpacking companies to monopolize the market and manipulate prices. A sudden 50 percent increase in kosher meat prices in 1902 sparked a massive boycott led by Jewish housewives on the Lower East Side. The government’s efforts to prosecute meat industry officials on antitrust and racketeering charges eventually reached into the kosher world as well. Most memorably, thirteen leaders of New York City’s Live Poultry Commission Merchants’ Protective Association were convicted in 1913 of illegally monopolizing the kosher chicken market by fixing prices and violently intimidating proprietors who defied them. The prosecution’s star witness, independent retailer Bernard Baff, was shot dead near Manhattan’s Chelsea Piers soon after the trial.

Europe vs. America
The generational conflict to which the Hebrew Standard alluded was evident in more ways than one.

While many older, European-born Orthodox Jews resisted any accommodation with American society, the younger generation believed it was possible to remain faithful to Jewish tradition while at the same time embracing positive aspects of American life—including those that were relevant to the world of kosher food production. As young American-born Orthodox rabbis began making inroads into the kosher supervision business, one prominent elderly rabbi complained, “Leave the responsibility for kashruth- supervision to the genuine rabonim.”4 The younger rabbis were, of course, no less halachically committed than their elders, but they sought a more modern, efficient American approach to kashrut supervision, with centralization, transparency and clearly defined standards.

Professor Jeffrey Gurock has written of kosher-supervising rabbis who, “holding to their jobs for dear life,” fought vigorously to fend off competitors.

As it turned out, a crucial development in the evolution of home appliances in the United States, and an equally important legal development, would pave the way for the transformation of kosher supervision in America.

The manufacturing of home refrigerators, initiated by General Electric in 1911, combined with the spread of frozen and canned foods, meant that the average Orthodox housewife had to spend much less time preparing meals. And the adoption in 1920 of the Nineteenth Amendment to the Constitution, giving women the right to vote, legitimized the increasingly prominent role of women in public policy matters.

Naturally, these changes would impact Orthodox households as well. Soon the newly created OU Women’s Branch, under the leadership of Rebecca (Betty) Goldstein, would galvanize the OU leadership to significantly enlarge the organization’s kashrut supervision activities. The building blocks were at long last in place for the kosher certification system that would ultimately put an end to the chaos and abuses of earlier years.

Notes
1. Quotations here are taken from the edition of the book that was translated and edited by Jonathan Sarna as People Walk on Their Heads (New York, 1981).

Dr. Rafael Medoff is the author of more than twenty books about American Jewish history, Zionism and the Holocaust, including The Rabbi of Buchenwald: The Life and Times of Herschel Schacter (New York, 2021).