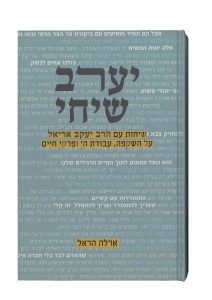 Translated from the Hebrew for the first time for Jewish Action, this excerpt was adapted from a book-length interview with Rabbi Yaakov Ariel, the recently retired chief rabbi of Ramat Gan and one of the leading rabbis of the Religious Zionist movement. From the book Ye’erav Sichi: Sichot im HaRav Yaakov Ariel al Hashkafah, Avodat Hashem uPirkei Chaim (Dabri Shir, 2018), this excerpt, authored by Rabbi Arale Harel, presents Rabbi Ariel’s views on contemporary Tanach study.

Translation by Rabbi Gil Student; published with permission from the publisher.

Tanach is our book of books. It is the source of our faith, personal and communal practices, and the great halachic system of the Oral Torah. Tanach is the focus of public Torah study: we read the Torah in synagogue, conclude with the Haftarah from the Prophets, and pray primarily from the prayers of King David contained in Psalms. When I served as the head of Yeshivat Yamit in Neve Dekalim, I taught an ongoing Thursday night class on Tanach.1

It is commendable that people learn Tanach. The in-depth approach to Tanach study is important, as it enables one to acquire a Biblical worldview based on the text and commentaries. However, I offer a specific criticism: I sometimes see a deviation from the Torah path, a phenomenon that I call a form of modern Karaism. Some independently interpret Tanach without basing themselves on the Sages and even attempt to undermine their authority.

If studied in the spirit of the Sages, Tanach can help us answer questions that arise—questions of faith, morality, values, culture and society.

In principle, we are allowed to study Tanach using the peshat approach, based on our independent and even innovative understanding. The Sages did not oppose this. Our great commentators interpreted Torah in this fashion. They did not explain the text based only on the interpretations of the Sages, because the Sages themselves did not obligate us to accept only their interpretations—except regarding practical halachah and fundamentals of faith. When we discuss practical halachah, the Sages alone have the correct interpretation. The same is true regarding ideas: if one proposes ideas that contradict the fundamentals of faith, he is not engaging in Tanach study. One can suggest new interpretations of Tanach using the peshat approach even if this interpretation is not found in existing commentaries, on the condition that it conforms with the spirit of Tanach and with the spirit of the great commentators who served as the Sages’ successors. Unfortunately, sometimes people mistakenly see themselves as capable of interpreting Tanach on their own, extracting ideas that contradict the spirit of Tanach and the spirit of the Sages.

For example, the Sages and commentaries explain Amos (9:11), “On that day I will raise up the fallen booth [sukkah] of David that is fallen,” as a reference to the period following the destruction of the Kingdom of Judah. While the Sages and the Rishonim interpret this verse as relating to the future redemption, based on the context it is also possible to explain this verse as referring to the Kingdom of Judah during the days of Hezekiah.2 While no other commentators raise this possibility, this interpretation is completely legitimate. The interpretation does not contradict the Sages’ approach, since prophecies were given both for the prophet’s generation and for subsequent generations. Isaiah’s prophecies about the Mashiach refer also to Hezekiah, who had the potential to be Mashiach had he and his generation been worthy. The above explanation of Amos can be correct as long as one fully believes in the future redemption in which the Davidic monarchy will be reinstated, like the sukkah of David that fell and will one day be rebuilt from the same materials.

We are permitted to and, in fact, we should seek to interpret Tanach. We should study Torah in depth, which invariably leads to new, fresh interpretations. Tanach was given for the ages; every prophecy that was written was intended for the generations. Each generation may interpret Tanach based on its own understanding, but on one condition: Tanach should not be forced to fit into one’s personal worldview. Tanach is here to teach us, not for us to teach it. The interpreter of Torah must rise above his personal physical and spiritual circumstances and seek to genuinely understand the Tanach. Through this study, he can gain true insights into the challenges of his generation, and use them to elevate his generation. An interpreter’s circumstances can only help him see things from a new perspective, through which he can understand the Biblical text.

If someone proposes ideas that contradict the fundamentals of faith, he is not engaging in Tanach study.

Contemporary studies and discoveries having to do with the realia of the ancient world, such as geography, history, and archeology, can shed new light on a verse. For example, the Book of Samuel (1 13:21) says, “And the price of the filing was a pim for the mattocks.” Commentaries struggle to define the word pim and offer a variety of interpretations. I heard from the late Professor Yehuda Elitzur (who taught Tanach at Bar-Ilan University) that scholars found a small weight bearing the word pim. So now we know that that pim refers to the weight of the coin (indicating its price). Someone who took his mattock to the Philistines for sharpening paid that high price because, at that time, there were no ironsmiths in Israel.5 Is there anything wrong with learning the meaning of the word pim?

Contemporary Biblical scholars identify many of the places mentioned in Tanach. However, we have to be careful as sometimes their hypotheses contradict the text. For example, some scholars contend that the city of Ai was not destroyed in Joshua’s time since they identify a different place as Ai, which was destroyed at an earlier period. They are mistaken. While there is room for honest, objective scholarship, we need to remember that these are imprecise sciences that are built on speculation. We cannot dismiss the Biblical text because of questionable speculation. Tanach is always correct. If there is a contradiction between Tanach and a theory, the theory must be wrong. However, a reasonable theory that coheres with Tanach and sheds new light on a verse is absolutely worth stating. Therefore, it is a positive development that people today are involved in studying the archaeological and historical aspects of Tanach; this revives the sacred text. But one should engage in such studies only if one accepts that Tanach is the ultimate truth.

We have to remember that, for us, Tanach is not archaeology but ideology. Archaeology helps us understand the context of the events described in Tanach. However, we cannot limit the prophecies to the historical period in which they were given. Everything contained in Tanach is intended for all generations. The main point in studying Tanach is to find its message for us today. The intent is not to reduce Tanach to contemporary concerns, but rather to ensure that it shapes our view of reality and that we see life through the lens of Tanach. If studied in the spirit of the Sages, Tanach can help us answer questions that arise—questions of faith, morality, values, culture and society. This engagement should be our primary focus when studying Tanach.

Notes
1. According to kabbalistic sources, it is best to study Tanach during the day and not at night. However, I taught the Early Prophets in depth from a halachic perspective, as explained in the Oral Torah, and therefore did not see a problem in learning Tanach in this way at night. Additionally, the recommendation against studying Tanach at night is not directed at everyone. If someone is unable to learn during the day, or the yeshivah insists that students devote all hours of the day to Talmud except for a single weekly class at night, it is not a problem.
2. Example suggested by Rabbi Arale Harel, the interviewer.
3. Sanhedrin 92b.
4. Ibid. 91a.
5. See Da’at Mikra, ad loc.