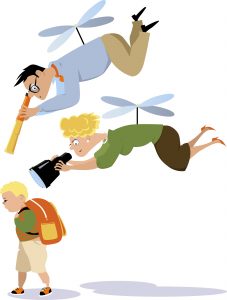 Modern parents have become much more protective of children on every level. The result: children are emerging less able to cope with life’s stresses. “Not very long ago, 50 percent of people lived in dire poverty,” says Dr. Rosmarin. “It was normal for life to be imperfect, for people to struggle. Today we’ve become so accustomed to comfort that we’re hypersensitive to anything that isn’t just right in our lives.”

Baby Boomers will remember that during their childhoods no one used car seats or wore helmets to ride a bike, and kids were allowed to play outdoors for hours far from parental supervision as long as they showed up for supper.

Modern safety regulations have clearly been effective. Dr. Mariana Brussoni of the Child and Family Research Institute in Vancouver told the New York Times that research bears out that “there’s never been a safer time to be a child” (“Making Playgrounds a Little More Dangerous,” May 10, 2019). In the same article, however, she argues that modern playgrounds are so safe that children, who need to test their bodies and their skills, get frustrated and start engaging in more daredevil behaviors—which ironically leads to more injuries compared to “less safe” playgrounds. Similarly, a 2014 Atlantic article entitled “The Overprotected Kid” states that today’s helicopter parents are afraid to let their children explore on their own. “Failure to supervise has become, in fact, synonymous with failure to parent,” writes author Hanna Rosin. “The result is a ‘continuous and ultimately dramatic decline in children’s opportunities to play and explore in their own chosen ways,'” she says, quoting psychologist Peter Gray. Few children today play outside regularly, exercising their bodies and imaginations, or challenging themselves—even if the challenge is simply to catch a toad, climb a tree or make a fort with old branches.

Not very long ago, 50 percent of people lived in dire poverty. It was normal for life to be imperfect, for people to struggle. Today, we’ve become so accustomed to comfort that we’re hypersensitive to anything that isn’t just right in our lives.

In the absence of the kinds of economic necessities known to previous generations of teens—putting yourself through college, earning your own pocket money, helping with housework and the care of younger siblings—few teens today are asked to take on significant responsibility beyond doing their homework. But responsibility is what builds confidence and resilience. “We have to ask, are teens being asked to step up to the plate?” says Rebbetzin Dr. Adina Shmidman, a longtime educator with a doctorate in educational psychology who currently serves as director of the OU’s Women’s Initiative. “They need to be tasked with responsibilities if they are to develop a sense of control and confidence.”

Yet modern parents tend to be indulgent and permissive. “Many kids don’t hear the word ‘no’ often enough,” says Rebbetzin Aviva Feiner, rebbetzin of Congregation Kneseth Israel (the White Shul) in Far Rockaway, New York, and a well-known educator and speaker. “So they don’t learn to deal with frustration or having to delay gratification.” Parents give their children plenty of positive stroking yet protect them from the challenges that would toughen them up and develop resilience. The result has been a “snowflake generation”—”Each one is unique, each one is beautiful, but if you touch them, they melt,” she says. A Jerusalem-based therapist draws a parallel with the process in which baby birds peck their way out of the egg. Doing so requires them to develop muscles that will later be crucial to their survival. If the mother bird were to “help” her babies by breaking the shell herself, those muscles would never develop. “Parents have good intentions,” she says, “but kids need to struggle a little. If parents do all their kids’ dirty work, they never develop competencies of their own.”

The result of coddling is that children remain childlike much longer than they used to. Dr. Jean Twenge, a psychologist at San Diego State University, analyzed data from a survey of 11 million young Americans from 1976 through the present, looking at adolescent behaviors and development. Her data reveals that eighteen-year-olds today are less likely than previous generations to achieve milestones like getting a driver’s license or finding a summer job. They generally grow up more slowly. “They look more like fifteen-year-olds than eighteen-year-olds,” she says.

A longtime Jewish Action contributor, Barbara Bensoussan is the author of a food memoir entitled The Well-Spiced Life, describing her discovery of Sephardic food and faith, and Pride and Preference, a novel reimagining Austen’s classic in today’s Orthodox world.

The Age of Anxiety by Ahuva Reich

5 1 vote
Article Rating
This article was featured in the Winter 2020 issue of Jewish Action.