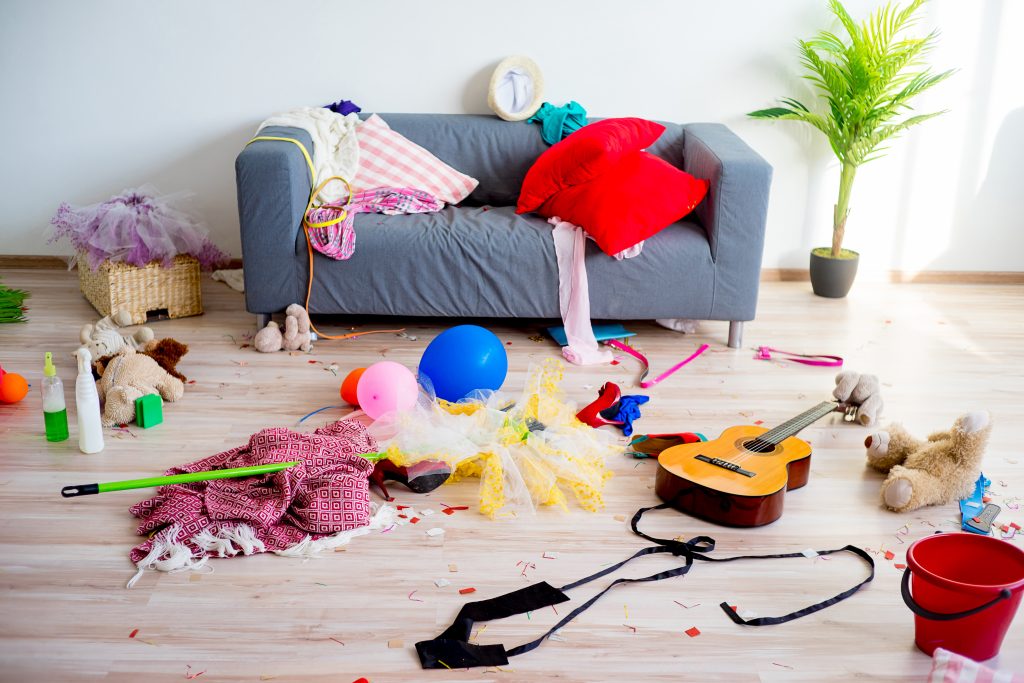 “Can we stop by the dollar store?” my nine-year-old pleads as we drive home from school. “I really need something for Ari’s party tomorrow, and I also need a police hat and a new gun for Purim.”

When I was little, I watched in delight as my oldest brother created a Purim mask. He took a cardboard cone with a base about three inches in diameter. He punctured a small hole on each side of the base and joined the holes with a long string. He affixed a red light bulb to the tip of the cone, which connected to a battery that he taped to the inside of the cone. My brother pulled the cone over his nose and face. Wires traveled inconspicuously down his collar and through his right sleeve and cuff to a switch in his hand. He would walk around with a fake bottle of wine, pretending to drink, and a few seconds later flick on the switch, which made the tip of his cone nose light up bright red. He was the drunken King Achashverosh.

Of all the Purim outfits I encountered as a child, this is the only one I distinctly remember. Perhaps because it made a deep impression: I saw that it takes time and effort to be creative. And I learned that the results are well worth it.

With Chanukah around the corner, many of our children will be showered with toys in the coming days. And the truth is that toys, whether made at home or purchased, are marvelous things. They teach children about the world and about themselves. Virtually all toys are, to a greater or lesser degree, educational. However, the best toys engage the senses, stimulate creativity, spark the imagination, arouse the intellect and promote social interaction. Whether it’s a playhouse, Rubik’s Cube or Monopoly, toys help children discover their identity and their role in society, or practice skills they will need as adults.

But especially this time of year, it is important to ask: Is having too many toys bad for our children?

Clutter, Clutter, Clutter
My wife and I seldom buy toys for our children, and yet our house is inundated with them. Somehow, toys gravitate to us. A set of puzzles from a neighbor who is moving; a walkie-talkie from Grandma; another Lego set from a visiting aunt . . . Like calories (a doughnut here, a few fries there), toy accumulation happens gradually, inconspicuously. And, like gaining calories, taking on new toys is easier than getting rid of old ones.

Nachmanides, the famous thirteenth-century Torah commentator, wrote that we are required to become holy through limiting even those things that are permitted to us. Reducing the amount of toys in our homes can have certain benefits: it can force our children to be more creative and resourceful, causing them to play outdoors more and experience nature; and—depending on the kinds of toys that are eliminated—it can help increase their attention spans. Perhaps most importantly, limiting the amount of toys helps convey the important message that material possessions don’t buy happiness.

Having too many playthings clutters not only the house, but also the spirit. It eclipses the awareness that “Eizeh hu ashir, hasameach b’chelko—Who is rich? He who is happy with his lot.” When our kids become adults, will they want three cars when one would suffice for their needs? The Torah tells us that a Jewish king may not accumulate too many horses, have too many wives, or “greatly multiply himself with silver and gold.” The king may acquire only the necessary amount of possessions he needs for public service, for the army, or for personal use. If a Jewish king may not have too many possessions, how much more so should the ordinary child not have an excessive amount of material possessions?

It is admittedly difficult to resist the pull of our children’s wishes, especially when they are fueled by the media and envy (“but all my friends have a Nintendo Wii. . . ”). Moreover, the lure of electronic devices, from iPads and smart phones to PS3s and Tablet PCs, poses a particularly growing challenge for parents. Many kids expect to be entertained all the time.

When we cannot distinguish between what our kids want and what they need, it is time to rethink our role as providers. The toy industry aims primarily to maximize profit, not to educate children. That is our responsibility. It is easier and more convenient to hand our precious one a coveted electronic gadget than to find the time and energy to read her a story or take her to the park.

Ultimately, my wife and I strive to create a rich, stimulating environment at home where the “need” (read: desire) for more toy cars, army soldiers or videogames will be, while not eliminated, at least reduced to a healthier level. And maybe the next time our son complains that he doesn’t have a good Purim costume, I’ll simply hand him a cone, a piece of string, a red light bulb, two wires and a battery, and tell him that what he has before him is fit for a king.