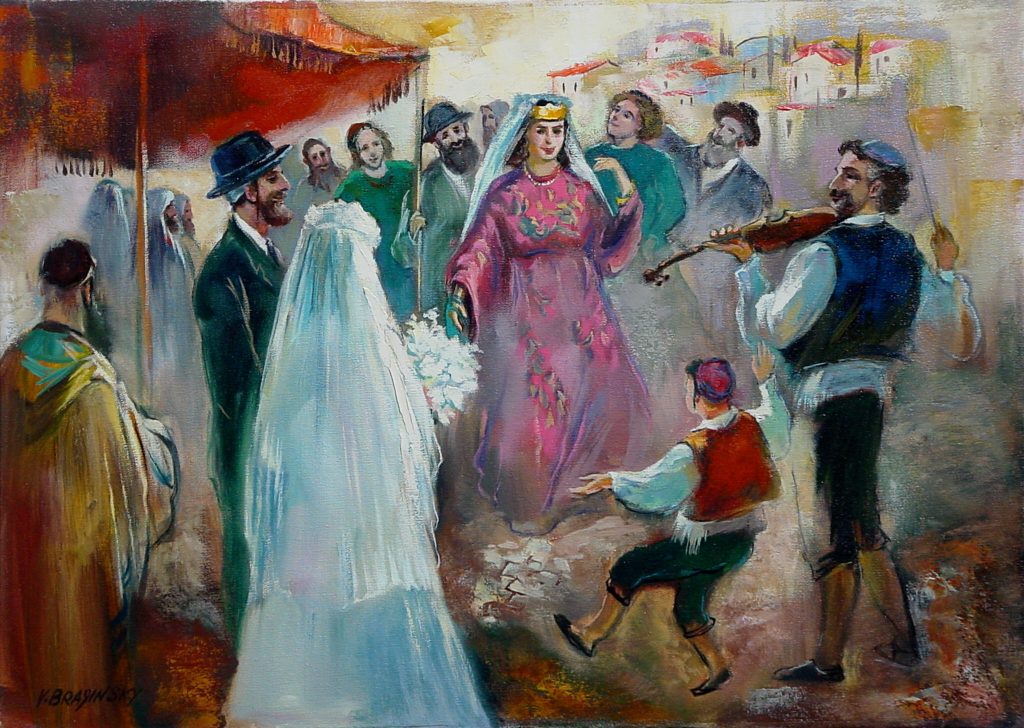 The history of Jewish marriage is somewhat tricky being that marriage is, of course, private. The myriad issues that do become public are often the exception, not the rule. For example, rabbinic responsa (rulings) are important sources for historians when studying a period in Jewish life, particularly the Middle Ages. But when it comes to marriage, responsa tend to reflect the problematic and conflicted marriages, rather than the harmonious and loving ones.

There is no way to truly survey the relationship between Jewish spouses historically, but anecdotal evidence paints an interesting contrast to some of the common stereotypes.

The memoir of Glückel of Hameln, a seventeenth-century Jewess from Germany, describes the deep admiration and love she and her husband had for each other. She writes that they constantly consulted with each other, and how her husband, on his deathbed, told those who asked for instructions regarding his business: “My wife knows everything. She shall do as she has always done.”1

Perhaps the most tragic line in the memoir is when Glückel reflects: “I truly believe I shall never cease from mourning my dear friend.”2 The writing here is particularly intriguing, as many would assume that referring to a spouse as a “friend” resembles twenty-first-century, rather than seventeenth-century, language.

Was Glückel’s marriage representative of Jewish marriages at the time? Historians believe that many features of Glückel’s life are characteristic of the average seventeenth-century Jewess, so perhaps her marriage was not particularly unique. Furthermore, Glückel does not speak about her relationship as if it were an aberration.

Of particular interest are some of the documents discovered in the Cairo Geniza, a storeroom in an old shul in Fustat, Egypt that contains over 300,000 historical documents. In the Geniza, a handful of letters from husbands to wives were discovered, reflecting a camaraderie and unity that one might not expect. The following are two examples of such letters. Both were written by Jewish men living in the Muslim Empire during the twelfth and thirteenth centuries. The contents are even more surprising, considering that the Jews living in Muslim lands tended to have stricter and more conventional gender roles than those living in Ashkenazic countries.3 (Unlike the Ashkenazim, Sephardim maintained polygamy throughout this period; however, supporting two wives was expensive, so it was not very prevalent.4)

Sephardic men were quite eloquent in expressing appreciation of their wives. One husband, after being abroad for many months, wrote the following:

Now I know how good your doings are, although I have no mouth to express this in words . . . I am sure you are well, but my well-being is bitter, because of my separation from you.

Another beseeches his wife to uproot their family and move to a new city, where he believes he can earn a proper living:

I am writing to you, my lady, my dear, crown of my head and my pride, may I never be deprived of you . . . please do not neglect me . . . there remains no one who loves and encourages me except you.5

While these personal letters do not provide conclusive evidence of what Jewish marriages of the past were like, they should make us rethink the misconception that husbands were traditionally authoritarian or emotionally disconnected from their wives.

Investigating a Match in the Middle Ages
While there were no dating algorithms or shidduch résumés centuries ago, the notion of investigating a prospective match is just about as old as the institution of Jewish marriage itself.

Glückel’s memoir, describing seventeenth-century Central European Jewry, offers an excellent example of what happens when the job is sloppily done. When one of her daughters was to be engaged, Glückel’s husband Chaim was already traveling to sign the agreement with the future mechutanim when Glückel received a letter urging her not to go ahead with the shidduch because the prospective groom “had many character flaws.” Because Glückel couldn’t reach her husband in time, he signed the engagement contract before receiving this information. Then ensued a couple of anxious years during which Glückel boldly wrote to her mechuteneste-to-be that they had heard concerning reports about her son, and could they please send him for a visit so she, Glückel, could discredit the reports with her own eyes, to which the lady tartly responded “Come see him yourself!”

The two families agreed to meet at an inn between their two towns and—surprise! The young man was just wonderful. The reports had gotten it all wrong. The couple married and lived happily ever after. But it could have all gone another way, which is why parents have always made it their business to conduct thorough inquiries.

Marrying for money was frowned upon, as the Talmud says: “Do not marry a woman who is from a higher socioeconomic status than yourself, lest you be rejected by her.”6 Some families, however, in the Middle Ages, tried to keep the family money “in the family.”7  The father of a scholarly son would often seek out a daughter from a rabbinic family, because such a young woman would be more likely to replicate in her new home what she had seen done by her parents.8

Medieval Women Entrepreneurs
In the Middle Ages, daughters’ betrothals occurred as early as the age of eight or nine, with marriages following at about age eleven or twelve, for boys of nearly the same age; the trend was related to economic considerations. Tosafot explains:

Our life in the Diaspora is becoming harder; consequently, if a person is now in a financial position to give his daughter an adequate dowry, he is apprehensive lest after the lapse of some years he will be in no position to do so and his daughter will remain unwed forever.9

Interestingly, despite the severe economic hardship that was the day-to-day reality of most Jews in those days, Jewish women were not completely dependent on men for financial stability. Medieval documents indicate how the vast majority of women were active in the workforce. The Ashkenazic woman could not tie herself to her hearth, willingly or unwillingly, for she was a vital partner in her husband’s business. In this role, she had many responsibilities outside of her home. This prompted the Maharshal (sixteenth century) to comment, “Our women now conduct business and represent the husband.”10

This reality no doubt impacted marriages and gave women a certain amount of independence and freedom. Halachic rulings of the time reflect this trend, granting women greater financial responsibility and permitting them to travel alone and to conduct business with gentile men.11 It was not uncommon for Medieval women to have their own side businesses, and it was also acceptable for them to keep the profits for themselves.12

Interestingly, widowhood was a particularly distinctive position in Medieval Ashkenaz, afflicting a large number of women, as husbands were often older than their wives and had shorter life spans. Widowed women had unique economic and social freedom, often inheriting their husbands’ estates, which they used to build new and successful businesses. Glückel of Hameln did just this by opening a sock factory upon her husband’s death, and by traveling to local fairs to sell her products. Gitl, another successful businesswoman, was given a vote of confidence in her husband’s will:

She is to deal in all business that there is according to her desire and will . . . because she is the lady of the house, dominant and ruling over the entire estate and business for all of her days.13

This is not to suggest that all widowed and divorced women were financially secure. Once widowed or divorced, it is likely that women saw a dip in their finances, but this is a point of contention among historians.14

In Search of Marital Bliss
Another common misconception is that divorce was stigmatized and therefore very rare. Historians such as Avraham Grossman and S.D. Goitein contradict this, suggesting divorce rates of more than 20 percent in Medieval Jewish society.15 Records from fifteenth-century Nuremberg actually indicate that close to a third of couples got divorced.16 There are some rabbinic denunciations of this practice, and there is evidence that divorces were instigated by both men and women. Grossman argues that women’s involvement in finances gave them greater independence and less of a need to remain in difficult marriages.17 Apparently the search for marital bliss and compatibility is not a purely modern phenomenon.

Eleazer of Worms, the thirteenth-century Rokeach, pays homage to his wife Dulce in a eulogy he wrote after she was murdered by Crusaders. Dulce supported her husband as a moneylender, pooling funds from neighbors to loan to others. She also produced Judaica items. Her husband describes in his writings: “She was like the merchant ships, feeding her husband, enabling him to study. The women who saw her paid tribute to her good merchandise.”18

In the nineteenth century, there are many examples of Talmudic scholars leaving their families to study in some of the big European yeshivot, while their wives ran businesses. In fact, scholarly families would often ask if a potential bride was literate in Russian and Polish, to ascertain whether she would be able to conduct a successful enterprise with the locals.19 Rabbi Eliyahu Dovid Rabinowitz (the Aderet), who was the rav of Ponevezh in the nineteenth century, had a six-year period of “kest” (full board provided to the couple by either set of parents so that the young man could continue his Talmudic studies free from financial worries). However, after this period, the Aderet’s wife opened a shop while he traveled to study. He wrote: “I headed for exile in a place of Torah to cling to the profession of my fathers, may they rest in peace.”20 He studied away from home for four years, and then rejoined his family, securing a post as a rav.

Rabbi Naftali of Amsterdam, a student of Rabbi Yisroel Salanter, was supported by his wife, who ran a bakery as a source of income. However, in a series of letters to his peer Rabbi Yitzchak Blazer, Rabbi Naftali describes his concern regarding his wife’s strenuous work. His letters also convey his loneliness and longing for his family.21 Some wives of scholars even undertook the gargantuan task of supporting their families and caring for their elderly parents. The “kollel life” of the past was tremendously challenging and demanded astonishing levels of perseverance and mesirat nefesh from young couples. These brave young men and women rose to the occasion, setting a precedent for later generations to follow.

Were Jewish marriages of the past so very different than contemporary marriages? Seemingly not. Although different periods saw different norms, camaraderie, deep friendship and mutual respect seem to characterize marriage of today and yesteryear.

Faigy Grunfeld teaches English and history. She lives in Detroit, Michigan with her family.

Meet the Shadchan
Historically, the shadchan was generally a pious individual, but often he tended to verge into colorful territory, traveling from place to place with a mental file cabinet of names and stories. Memoirs reflect on this eccentric, minstrel-like figure, who was often learned for if he was less than so, desirable families would be closed to him. (His fee was usually 2 percent of the dowry.)

Author Chaim Shapiro, who documented his memories of the shtetl world in the early 1900s, reminisces how the shadchan was beloved, revered, hated and absolutely needed. Shapiro writes: “Shtetl folk knew how to distinguish between hard fact and guzma (exaggeration). They could tell where the core of truth ended and the embroidery began. If they chose to accept everything that was said, it was because they wanted to.”22 Apparently, because exaggeration was expected, the shadchan was compelled to exaggerate further in order to make a potential match truly stand out.

5 1 vote
Article Rating
This article was featured in the Summer 2019 issue of Jewish Action.