Stardom and the rise of the “celebrity chef” have created a place for chefs in modern society on par with the likes of sports personalities and actors. That visibility has impacted the kosher world as well. Today, modern kosher cookbook authors are receiving their own celebrated status. 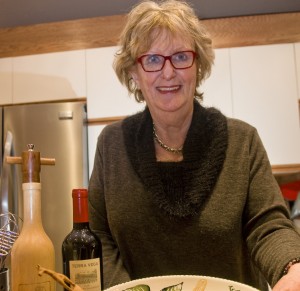 A practical and witty yet detailed approach has always been the way Norene Gilletz writes recipes. Brought up in a traditional Jewish home in Winnipeg, Canada, Norene was schooled not with professional cooking classes, but in the delights of her mother’s home cooking, whom she adoringly remembers “would make magic from ingredients.”

Norene was always fascinated with the transformative process of cooking. After she married, she moved to Montreal and became the editor of B’nai B’rith Women’s cookbook Second Helpings, Please (Montreal, 1968). She became the voice of the book and shortly thereafter started working on her own book. Norene was halfway through the manuscript when she met the food processor, a new popular appliance at the time. She rewrote the manuscript entirely and self-published the first edition of The Pleasures of Your Food Processor (Montreal, 1979) (now the celebrated Food Processor Bible [Toronto, 1981]), selling 160,000 copies. “I remember typing it on an old fashioned typewriter in the hospital after my son was born!”

In 1975, Norene opened Norene’s Cuisine, a cooking shop that also offered classes. Originally the shop operated out of her basement, but eventually it moved to a storefront. During the ten years it was open, Norene joined the International Association of Culinary Professionals (IACP). Taking master classes from experts like French chef Jacques Pépin was how she spent her vacations. “He taught me you don’t have to be bound by recipes.”

Zeroing in on specific diets and nutrition has become one of Norene’s specialties. Her books have become a support and resource for low-iodine diets, high-fiber eating, low GI (glycemic index) and all-around healthful cooking. Her latest project is no exception. Norene is currently working on a cookbook that focuses on reducing the risk of Alzheimer’s through diet, entitled Memory’s Kitchen—Save Your Brain, Put Science on Your Plate.

Cookbook writing (full disclosure: Norene has been the Jewish Action food columnist for the past few years) and consulting, recipe editing and indexing and nutritional analysis have shaped her professional life. Most recently though, Norene, based out of Toronto for the past eighteen years, has ventured into the commercial realm, launching Koogletz, her first product line of kugels, cakes and meatballs, all based on her own recipes and specs.

For Norene, connecting with her readers and students is part of the culinary experience. “It’s fun to find out from people that you’ve made a difference.” With a generous spirit and warm smile, she continues to reach out, anticipating the cooking questions her readers will ask and mentoring those new to the field. “You can communicate with food. Food opens doorways—everyone can relate to food.”

Norene’s Pesach Tip: People overdo it on Pesach. Use fresh produce, meats, et cetera, and keep your menu simple. It’s not a competition. Start with a soup and a simple fish dish. Stick to the outer aisles of the grocery store.

Norene’s Motto: Food that’s good for you should taste good!” 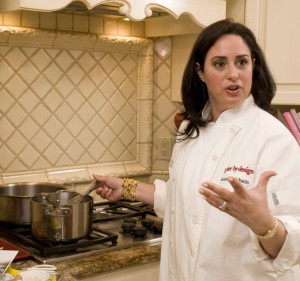 Susie Fishbein grew up in Oceanside, New York. With an MA in science, Susie enjoyed teaching fourth grade science in the Oceanside public schools prior to moving to Livingston, New Jersey to raise her family. She never expected that co-editing The Kosher Palette (Livingston, 2000), a fundraiser for her kids’ school (Joseph Kushner Hebrew Academy in New Jersey), would launch her culinary career spanning fifteen years, an eight-cookbook Kosher By Design series and annual culinary tours.

“We tapped into a rich vein of what people were looking for—fine, modern and elegant food to put on our holiday and party tables. But the early cookbooks weren’t speaking to us visually,” Susie explains when describing her start. Inspired by what Ina Garten and Martha Stewart were doing so beautifully for the non-kosher world, she was determined to deliver that level of sophistication to the modern kosher home cook.

Drawing on her early experiences in the classroom, Susie uses her books and demos as opportunities to teach, reaching targeted audiences for each of her books. “I really wrote based on where I was in the kitchen and in life. Short On Time (Brooklyn, 2006) was about being a working parent and getting dinner on the table. Cooking Coach (Brooklyn, 2012) was a look back as a teacher—what lessons I could impart to all my readers.”

In 2008, Susie was voted one of the “Top 50 Most Influential Jews” by the Forward. Two years later, she was honored at the White House during Jewish American Heritage Month in recognition of her contributions to Jewish life. With over a half million copies sold, her books have revolutionized the way people think of kosher.

Always working on the next project, Susie has one more cookbook in store for her readers. Recently released, Kosher By Design Brings It Home is the eighth and final book in the Kosher By Design series. Brings It Home adapts much of what she has learned from international chefs, restaurateurs and cooks for the kosher home consumer. “We don’t speak the same language, but we speak food. [This book] touches on all the places I’ve been.”

Susie’s Pesach Tip: Plan your menus in advance and use the recipes to prepare shopping lists. Buying a dozen eggs isn’t helpful if your recipes in total require three dozen!

Susie’s Motto: Anyone can cook and anyone can get better at cooking. Slow down, stress less and enjoy the process. 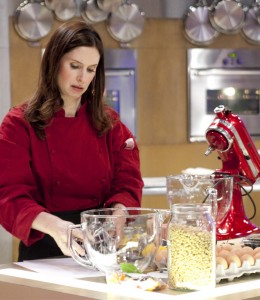 Paula Shoyer started out her career as an attorney and speechwriter. But a few years spent in Europe in the mid-90s changed her direction entirely. Paula enrolled in a pastry course for fun while living in Paris. After receiving her pastry diploma from the Ecole de Gastronomie Francaise Ritz-Escoffier in 1995, she opened a dessert catering business that she ran for two years in Geneva, Switzerland, and began giving classes at fundraisers.

When Paula returned to the US, she continued teaching and developing recipes, as well as running Paula’s Parisian Pastries from her home in Chevy Chase, Maryland. While editing Susie Fishbein’s Kosher By Design Entertains (Brooklyn, 2005), she began considering writing her own book. Paula noticed that there were no current, modern cookbooks on fine, kosher desserts and began writing and converting baking classics to pareve—a natural application of her French pastry training. “There was a gap in the literature and it had been a long time since a good kosher baking cookbook had been done,” she recalls. The Kosher Baker (Waltham, Mass., 2010) was followed by The Holiday Kosher Baker (New York, 2013). These books are part of what Paula calls her “baking revolution.”

Establishing herself as the go-to expert in kosher baking, Paula makes regular holiday appearances on television and radio. She successfully competed on the Food Network’s Sweet Genius and has recently had several appearances on the Hallmark Channel’s Home and Family.

“I love writing books. I love the process and I love creating recipes,” Paula confides. Her most recent book, The New Passover Menu (New York, 2015), modernizes Passover dishes while incorporating ethnic ingredients and an international, global feel. Paula continues to derive inspiration from her varied world travels and strives to bring her readers new tastes that are specially adapted for Pesach dining.

Paula’s Pesach Tip: I use a ton of ground nuts for baking during Pesach and find that they are very expensive in the stores. I bought a coffee grinder that I just use for nuts and grind almonds, walnuts, hazelnuts, pistachios, et cetera into a powder, which is a healthy flour substitute during the holiday.

Paula’s Motto: I like to take traditional food and desserts and make them easier, healthier and more modern. As for desserts, I believe great desserts can be created no matter what special diet you are on.”

Naomi Ross is a cooking instructor and food writer. She teaches throughout the New York area and writes articles connecting cooking and Jewish inspiration. Her web site is www.koshercookingconcepts.com.