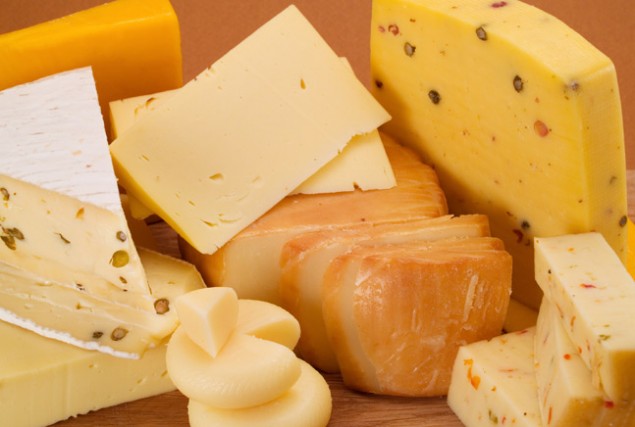 Legend has it that cheese was first discovered by accident. Thousands of years ago, an Arabian nomad was carrying milk in a container made from the lining of an animal’s stomach. Upon reaching his destination, the nomad opened the container and noticed that his milk had hardened into something else—something we now call cheese. (The enzymatic properties of the stomach lining must have interacted with the milk to produce cheese.)

Whey to Go: How Cheese Is Made

Technically, cheese is broken down into two distinct categories: acid-set cheese and rennet-set cheese. Acid-set cheese (“soft cheese”) refers to cream cheese, cottage cheese, farmer cheese and other cheeses produced by adding bacterial cultures or an acidic substance to milk. This results in the formation of soft cheese curds and whey.

All cheese production involves gathering the curds together and removing the whey. The curds are then either kept somewhat loose or molded tightly. Subsequently, they are processed in a multitude of ways.

In addition to milk, cultures and rennet, various other ingredients are used in most cheese making. Cream (milk fat) and non-fat milk powder are often added to modify the product’s fat ratio; vinegar may be added to adjust the pH of the milk prior to conversion into cheese, and additional cultures and enzymes are commonly added to achieve various flavors as well as to prepare the milk for interacting with the rennet. All of these ingredients help explain how there can be over one thousand varieties of cheese in the world today.

While all hard cheeses are made with rennet, they vary greatly in how they are manufactured. Parmesan cheese is produced by adding rennet to scalding hot milk and then aging the cheese for at least a year until it is quite firm. Mozzarella cheese is cooked and stretched in a large tub after it is formed, resulting in a unique elastic texture, ideal for pizza and lasagna. Mozzarella and many other cheeses are brined, that is, submerged into a salt-water solution to protect the cheese from spoilage. Cheddar cheese is manufactured at somewhat cooler temperatures and is often aged.

Aside from creating a firm texture, aging provides for a uniquely sharp taste. The more cheese is aged, the more powerful its flavor. (Just compare six-month-old cheddar to its two-year-old counterpart; they are worlds apart in taste.)

Nearly every country in the world has its own varieties of cheese, developed over hundreds, if not thousands, of years. Cheese connoisseurs regard European cheeses as the finest. France boasts Camembert; Switzerland has Emmental; England gave birth to cheddar, double Gloucester and Cheshire cheeses, and Greece is known for feta cheese. (America has not developed any cheeses of its own. American cheese is not pure cheese; rather it is a blend of already-made cheeses—mostly cheddar—which is melted, hardened and sliced. Think of the hot dog–a collection of various scraps of meat which are ground together with various additives and molded into a new piece of meat; American cheese is the US dairy industry’s equivalent.)

How is cheese made kosher?

As with any food, all of the ingredients in the cheese as well as the equipment used during the manufacturing process must be kosher. However, a special prohibition makes kosher certification of cheese a bit more challenging: the ban on gevinat akum (“non-Jewish cheese”), which states that cheese made by non-Jewish companies and/or individuals is not kosher. Only gevinat Yisrael – cheese manufactured with Jewish involvement or supervision – is kosher.

What is the source for gevinat akum?

The Talmud (Avodah Zarah 29b, 35a-35b) states that the sages of the Mishnaic period forbade eating cheese manufactured by non-Jews. Although the Talmud offers various reasons for this prohibition, most halachic authorities maintain that the ban was made because of the use of rennet in cheese making. Since rennet was traditionally derived from the lining of a calf’s stomach, Chazal (the Rabbinic Sages) forbade non-Jewish cheeses because of the likelihood that they contained rennet from calves that had not been slaughtered in accordance with Halacha.

Gevinat akum is deemed non-kosher under all conditions, rendering the utensils and cookware used in making and serving it non-kosher as well.

Can the miniscule amounts of rennet used in hard cheese render the product non-kosher?

A product containing a minuscule amount of a non-kosher ingredient is often regarded as kosher, after the fact, as the non-kosher substance is batel, or nullified. However, rennet used in hard cheese cannot be batel because of the halachic axiom that a non-kosher ingredient that gives a product its form—called a davar hama’amid—is never nullified (Yoreh Deah 87:11). Even trace amounts of such an ingredient can affect the kosher status of a product. Rennet is one of the most potent food enzymes, and it is therefore used in hard cheese making in minute amounts; nevertheless, it cannot be batel.

Aren’t some cheeses made from non-animal derived rennet?

In today’s world of advanced food technology, much of the rennet used is microbial, that is, artificial. Nevertheless, mainstream halachic literature posits that Chazal banned all cheese made by non-Jews, irrespective of the presence of animal rennet, as a precaution against the consumption of actual non-kosher animal rennet-based cheese (Rambam, Hilchot Ma’achalot Asurot 3:14 and Shulchan Aruch ibid., 115:2). Thus, cheese made from artificial rennet (as well as Portuguese hard cheese made from thistle-flower rennet) is not kosher when manufactured by non-Jews.

It should be noted that a significant amount of today’s cheese manufactured in mainland Europe does contain animal rennet. Furthermore, lipase—an enzyme added to some cheeses to hasten the breakdown of fat and endow a more powerful flavor—is frequently animal-derived (lipase is extracted from the tongues of domesticated animals), although artificial lipase substitutes are also available. Romano cheese is often made with goat, lamb or kid lipase, and blue cheese frequently contains calf lipase.

Animal-derived rennet and lipase can be kosher, however. If the kosher source animal is slaughtered, de-veined, salted and processed according to kosher law, and the tissue is then totally dehydrated, its rennet and lipase are fine for kosher use. (There is no halachic problem with using kosher-processed, dehydrated animal-derived enzymes in cheese [mixing meat and milk], since the amounts used are miniscule and their flavor is not detectable in the cheese. Moreover, the enzymes are not cooked with the milk. Also, the davar hama’amid principle cited earlier only applies to non-kosher substances, and these enzymes are actually kosher.) Still, even cheese made with glatt kosher animal rennet and lipase is considered gevinat akum when manufactured by non-Jews, as the Sages created a general ban on such cheese.

How does one make gevinat Yisrael?

Some halachic authorities rule that to satisfy the gevinat Yisrael requirement, a Jewish person must be present to supervise the cheese-making and ensure that only kosher rennet is used; others maintain that a Jewish person must actually add the rennet (similar to “bishul Yisrael” and “pat Yisrael,” which are satisfied only if a Jewish person is physically involved with cooking or baking the food).

In modern cheese facilities, rennet is often not added manually. Rather, it is dosed into cheese vats via automated rennet feeders. In such cases, the rabbinic field representatives can activate the rennet feeders for each vat of cheese produced.

Does the gevinat Yisrael requirement also apply to soft cheeses?

This, too, is a point of dispute. Some halachic authorities maintain that gevinat Yisrael is a requirement that applies to all cheeses. Others contend that only cheeses in which rennet is the primary coagulant are subject to this rule. The OU and most of the other kosher national certifying agencies adopt the latter position, and on-site full-time supervision is thus not required for acid-set cheeses. (Of course, the ingredients and equipment must be kosher nonetheless, and a reliable kosher symbol must be present.)

The cost of sending rabbinic field representatives to far-flung places to supervise hard-cheese productions for days on end is significant. Kosher cheese manufacturers will naturally need to charge more for their products to cover the costs involved.

Furthermore, nearly all domestic and European hard-cheese plants are non-kosher when not doing special kosher cheese productions. These plants schedule kosher campaigns sporadically in the midst of their normal non-kosher activity. Thus, aside from supervising the cheese manufacturing process, the rabbinic field representatives often need to supervise the kashering of a plant before every kosher production. This can take a long time to complete, and it is not simple work.

The kashrut rules for cheese are among the most mysterious to the average kosher consumer. Even otherwise scholarly and erudite members of our community are often “in the dark” as to what makes cheese kosher (and why they pay more for it!). It is hoped that the above discussion sheds light and unravels some of the mystery.

Rabbi Gordimer is a rabbinic coordinator in the OU’s Kashrut Department. He specializes in the dairy industry, where he manages the kosher certification programs for hundreds of plants.

4.7 3 votes
Article Rating
This article was featured in the Winter 2005 issue of Jewish Action.