Nothing compares to a fresh latke right out of the pan: crisp and lacy, craggy fried threads of potato so good that you overlook the film of grease on your fingers. “It’s so worth it,” we say to ourselves as we lick our fingers clean.

Every year my latkes get some kind of facelift, a reinvented version that keeps my guests on their toes. But the frying is not limited to latkes. My kitchen smells like a fast-food restaurant for a week; my oil-stained apron is kept at arm’s reach. It’s fun to explore using other vegetables (or combinations), especially with better nutritional values. With sweet potato or other root vegetables, their bolder flavors are well suited to match many different ethnic profiles. Also, then I can pretend my oil-laden latkes are actually healthy!

Old school or new world, fried treats are the making of wonderful oil-stained holiday memories, a momentary pleasure to be enjoyed with family and friends. The diet starts next week. 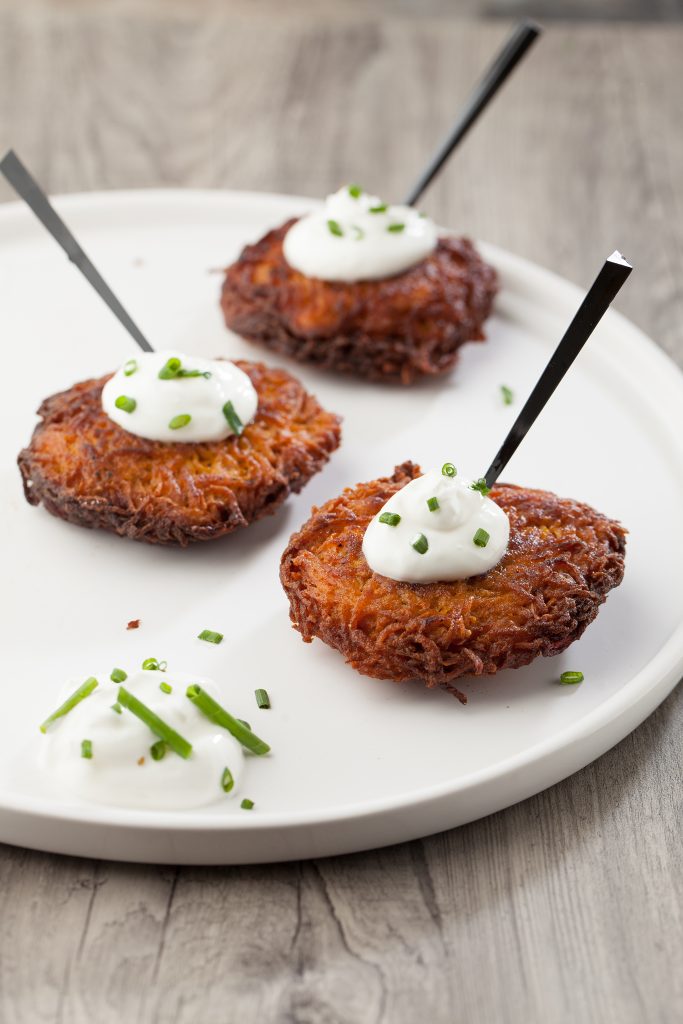 The natural sugars in sweet potatoes can cause sticking. Do not try to move about and flip until a crust forms on the bottom of the latke.

1 teaspoon salt (or more to taste)

Canola or vegetable oil, for frying

Stir together potatoes, scallions, flour, eggs and spices in a large mixing bowl. Heat about ¼-inch oil in a large nonstick skillet over medium heat until hot (not smoking). Working in batches, spoon potato mixture (approximately 2 tablespoons per latke) into oil and flatten with the back of the spatula. Cook until golden brown, flipping once, about 2-3 minutes per side. Transfer latkes with slotted spatula to a rack or place on paper towels to drain.

Combine all ingredients in a small bowl. Whisk to blend.

The bold flavors of Central Asia sing through in these healthy root vegetable latkes.

Fill a large frying pan with ¼-inch depth of oil. Place pan over medium-high heat. When oil is hot, drop large spoonfuls of the mixture into the oil, flattening the mound with the back of the spoon for even thickness. Do not overcrowd pan. Fry until crisp and golden brown, turning over latkes once during cooking time—about 4-5 minutes per side. Transfer to platter lined with paper towels to drain.

Cook’s Note: If making ahead, refresh in a single layer on a baking sheet uncovered in a 350ºF oven until warmed through and crisp.

Pakoras, a.k.a. pakodas or bhaji, the popular chickpea batter-fried Indian fritters, are a deliciously crispy chaat (street snack) commonly served with green herb chutney or tamarind chutney. You can use this chickpea batter for dredging a variety of vegetables. I recommend parboiling firmer vegetables like cauliflower or potatoes prior to frying in order to ensure they are cooked through and tender once fried.

Parboil and prepare vegetables, as needed. Drain and set aside.

In a medium mixing bowl, whisk together gram and rice flours, baking soda, spices and water until a thick batter forms. Set aside to rest.

Meanwhile, heat oil for deep frying: fill a deep pot with about 2-3 inches of canola or peanut oil. Place over medium heat and monitor with fry thermometer until temperature reaches 350-365ºF.

Dredge each vegetable piece in batter and allow excess to drip off. Working in small batches, carefully drop dredged vegetables into the hot oil, frying for about 3-4 minutes or until golden brown depending on size. Remove with slotted spoon and transfer to a rack set over a baking sheet to drain. Repeat with remaining vegetables and batter.

Serve warm with chutney (if desired).

Mix cinnamon and sugar in a large plate; set aside.

Meanwhile, prepare batter. Place water, butter, salt and sugar in a saucepan over moderate heat. Bring to a boil, stirring, until butter is completely melted and mixture is simmering.

Add flour all at once, stirring constantly. Remove from heat and stir vigorously until dough forms a ball and comes away from the sides of the pan. Transfer to a mixing bowl and let cool for 2-4 minutes.

Add vanilla and egg, beating vigorously with electric beaters or whisk after each addition. Beat until egg is well incorporated. Spoon choux paste into a pastry bag fitted with a large piping tip (no bigger than 1/2 inch open-star tip). Carefully pipe into 5-6 inch length strips, using scissors or a knife to cut and carefully drop into the oil. Do not fry more than 5-6 churros at a time. Cook for about 2 minutes per side, until golden brown. Use a slotted spoon to remove and drain; transfer to rack to cool and then roll in cinnamon sugar while warm. Repeat with remaining churros.

Cook’s Note: Add a pinch of chili powder or cayenne pepper to the melted chocolate for a spicy kick!

Frying Tips
Badly fried food can be traumatizing: the oil is oozing, the texture all soggy. It’s an unappetizing mess and who wants to eat that? Free yourself of your frying fears! Follow these tips for perfectly crisp-on-the-outside, moist and tender-on-the-inside results that cook evenly and quickly!

– Choose your cooking oil carefully. You want one with a high smoke point, that is, one which won’t break down and smoke at high frying temperatures. Peanut oil, safflower oil, avocado oil and canola oil are good choices (olive oil is not because it has a low smoke point).

– Choose a deep, heavy pan for frying. Leaving a headspace (space at the top of the pan) of at least one to two inches allows for a safety margin when the oil bubbles up as the food is added.
A good heavy bottomed pan will also conduct heat better, saving you from unevenly cooked, burnt food.

– Make sure that the food you are going to fry is dry. Oil and water do not mix, especially at such high temperatures. Burns from splattering oil
are not fun.

– The best temperature for frying is 350-375ºF. When deep frying, the best way to make sure you’ve got it right is with a fry thermometer. With pan frying, the shallow depth of oil in the pan may preclude this. You can tell that oil is ready when a 1-inch cube of white bread dropped into the oil sizzles upon contact and browns in
60 seconds.

– For pan frying, the food should be less than an inch thick (that’s why thin cutlets work best). If too thick, the surface of the food will burn before the center is cooked; the oil should be no more than half as high as the food so that the same area is not fried twice when you flip it. For deep frying (immersion frying), 2-3 inches of oil are required so that even large items can be immersed in the oil.

– Don’t overcrowd the pan! Carefully add the food, leaving space around each piece so the food will fry evenly and not steam. Too much food added at once can also cause the oil temperature to drop and the food will absorb fat.

– Regulate the heat if necessary to keep the oil temperature steady.

– Use a slotted spoon when transferring to allow oil to drain. Drain in a single layer on paper towels or on a wire rack.

– Discard oil properly: let the oil cool completely, pour it in a jar or container and throw it in the garbage. Don’t pour it down the drain!

Naomi Ross is a cooking instructor and food writer based in Woodmere, NY.  She teaches classes throughout the country and writes articles connecting good cooking and Jewish inspiration. She is excited to be writing her first cookbook which will be released next year. Follow her at @naomirosscooks on Instagram or visit her website at: www.koshercookingconcepts.com