Although potato latkes are a traditional Chanukah treat, why not experiment this year by making latkes with other vegetables? With the recipes below, you can enjoy a different kind of latke every night of Chanukah!

I prefer to use russet potatoes because they are higher in starch and have a lower water content. However, you can also use red potatoes or Yukon Gold successfully.

For lacy latkes, grate the potatoes using the grating blade of the food processor, using very light pressure. Empty the potatoes into a colander and rinse under cold running water to remove the starch (this also helps prevent the potatoes from turning dark). Squeeze dry and then process in batches using the steel blade, with very quick on/off pulses. Do not overprocess. Transfer the grated potatoes to a bowl and mix them with the other ingredients, working quickly.

You can bake latkes instead of frying them. If you’re frying, don’t overcrowd the pan, as it will lower the temperature of the oil. When the latkes are done, their outsides will be crisp and the centers will be tender yet cooked through.

Most latkes can be made in advance and frozen succcessfully. Reheat them, uncovered, at 375° for about 10 minutes on a foil-lined baking sheet, until they’re crispy and piping hot. There’s no need to defrost them first.

Serve latkes with a dollop of applesauce or tomato salsa for a meat meal, or with low-fat sour cream or yogurt for a dairy meal.

These latkes are quick and easy, and you can use basic ingredients you’re sure to have on hand.

Insert steel blade in food processor. Cut potatoes in chunks and cut onion in half. Place both in processor with eggs. Process until puréed, about 20 to 30 seconds. Add all remaining ingredients except oil; process a few seconds longer to blend into a smooth mixture.

Note: Stir batter before cooking each new batch. Latkes can be placed on a baking sheet and kept warm in a 250° oven. They freeze well.
Baked Version: Place oven racks on the lowest and middle positions in oven. Preheat oven to 450°. Drop spoonfuls of potato mixture onto well-oiled baking sheets; flatten slightly. Bake 10 minutes, until bottoms are browned and crispy. Turn latkes over and transfer pan from upper rack to lower rack and vice versa. Bake 8 to 10 minutes longer.

Using the steel blade of the processor, process onion until fine, about 6 to 8 seconds. Add all remaining ingredients except oil. Process until blended, about 15 seconds.

Heat oil in a large non-stick skillet over medium-high heat. Drop large spoonfuls of carrot mixture into hot oil to form pancakes and flatten slightly. Brown well until golden, about 2 to 3 minutes on each side. Repeat with remaining batter, adding more oil if necessary. Drain well on paper towels.

These luscious, low-carb latkes are a delicious alternative to traditional potato latkes, with just 42 calories and 4 grams of carbohydrates each.

Steam the cauliflower for 10 minutes or until tender (or microwave on high, covered, for 6 to 7 minutes). Measure 3 cups cooked.

In a food processor fitted with a steel blade, process the cauliflower until mashed, about 10 to 12 seconds. Add all remaining ingredients except oil; process with quick on/off pulses to combine. If the mixture seems too loose, add a little extra matzah meal.

Heat oil in a large non-stick skillet over medium heat. Drop rounded spoonfuls of cauliflower mixture into hot oil to form pancakes and flatten slightly. Brown well until golden, about 4 to 5 minutes on each side. Repeat with remaining batter, adding more oil if necessary. Drain well on paper towels. 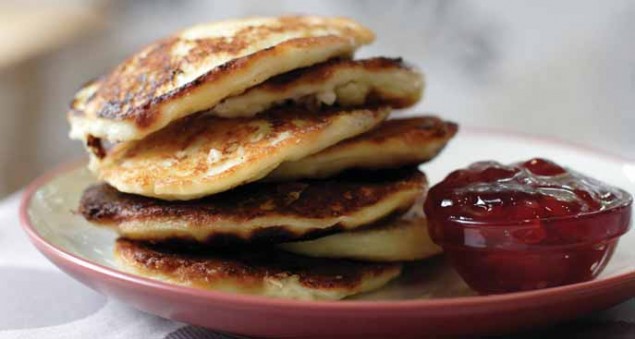 Remove the grater and insert the steel blade into the food processor. Process the onion, scallions and dill until finely minced, about 8 to 10 seconds. Add the eggs to the processor bowl and process for 5 additional seconds. Transfer the mixture to the grated vegetables and add flour, salt and pepper; mix well.

Heat oil in a large non-stick skillet over medium-high heat. Drop rounded spoonfuls of vegetable mixture into hot oil and brown well, about 2 to 3 minutes on each side. Repeat with remaining batter, stirring before each new batch. Add more oil if necessary. Drain well on paper towels.

Note: Keeps for up to 2 to 3 days in the refrigerator and reheats well. Freezes well for up to 2 months.

Chef’s Secrets:
Eggs-Actly!: Instead of using 6 eggs, substitute 4 eggs and 4 egg whites or 1 1/4 cups liquid egg substitute.
Warm It Up:To keep cooked latkes warm, arrange in a single layer on a large baking sheet and place in 250° oven. Do not cover.

Traditional latkes are usually fried in at least 1/4 cup of oil, so one latke contains about 3 grams of fat. I don’t know anyone who can stop at just one latke, so these “no-guilt” latkes are a terrific alternative. Each one contains just over a gram of fat—now that’s a miracle!

Place oven racks on the lowest and middle positions in your oven. Preheat oven to 450°. Line two baking sheets with aluminum foil. Spray with non-stick spray, then brush with 1 teaspoon of oil. Or, use two non-stick baking sheets and brush each one lightly with oil.

Peel potatoes (or scrub them well if you don’t want to peel them). Using the grater of your food processor, grate potatoes using light pressure. Place potatoes in bowl and set aside. Insert the steel blade of the food processor and process spinach, onion, carrots and dill until fine. Add potatoes, eggs and the remaining 2 teaspoons oil. Process with quick on/off pulses to mix. Quickly blend in remaining ingredients.

Drop mixture by rounded spoonfuls onto prepared baking sheets and flatten to form latkes. Bake uncovered for 10 minutes, or until bottoms are browned and crispy. Turn latkes over and transfer pan from upper rack to lower rack and vice versa. Bake about 8 to 10 minutes longer, until brown. Best served immediately.

Note:Latkes may be made a day in advance and can be frozen.
Variations: Instead of baking latkes, brown them in a non-stick skillet. Instead of adding the oil to the latke mixture, use it for frying.

Here’s a slightly different version of typical potato latkes. The celery root adds wonderful flavor and is a great idea for those who are watching their carbs. This recipe is from my friend Estee Kafra, a food photographer and food writer.

Place the grated potatoes and celery root into a colander and press to squeeze out extra juices.

Pour mixture into a large bowl and add all remaining ingredients except oil; mix well.

Heat vegetable oil in a large frying pan and place tablespoons of batter into the hot oil. Be careful not to overcrowd. Once edges have browned, flip latkes over and cook on other side. Remove latkes from oil with slotted spoon or spatula and place on paper towel to drain.

Place all ingredients except oil into a large mixing bowl. Using an immersion blender, blend until a thick batter forms.

Heat a frying pan with a thin layer of oil. Drop in batter, a tablespoonful at a time. Adjust the temperature to ensure the latkes don’t burn; flip them once the batter is a bit firm and the bottom is brown.

Remove from pan and place on paper towel to absorb excess oil. Garnish with jam.

Note: These cheese latkes have less flour, less sugar and more cheese than most cheese latkes.
Variation: Estee sometimes adds a bit of jam into the middle of the latke right before it firms up. To do this, make an indentation in the center with a spoon and place a small amount of jam in it. Flip over carefully. Enjoy!

Norene Gilletz is a cookbook author and culinary consultant in Toronto. She is the author of seven cookbooks. For more information, visit her web site at www.gourmania.com.