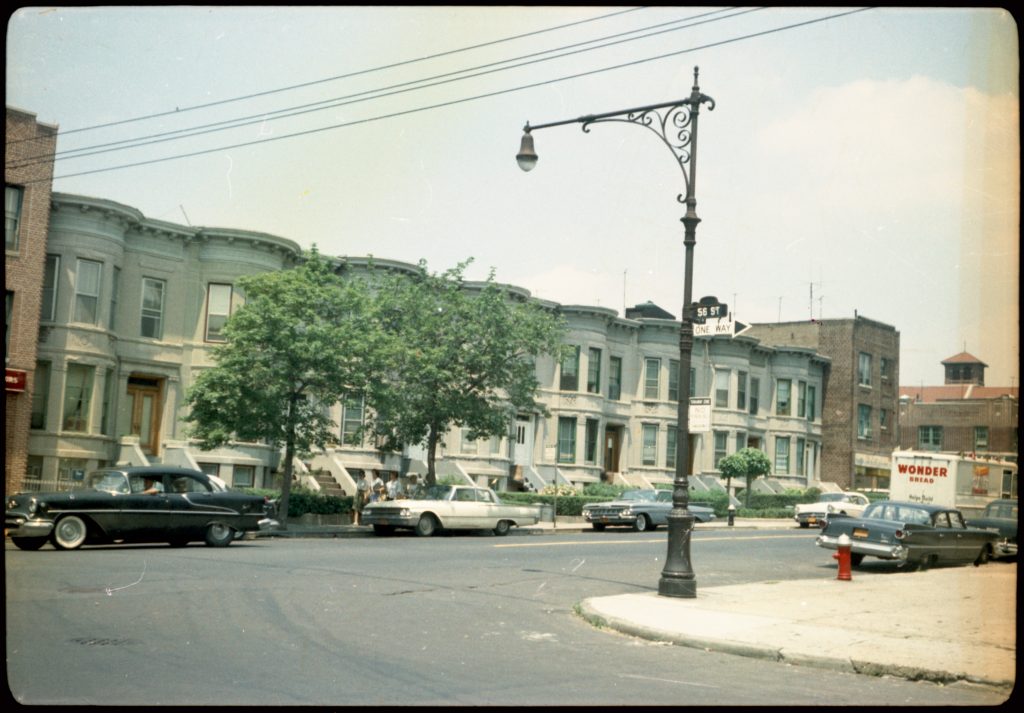 Excerpted from “Boro Park Is My Town,” by Joseph Kaminetsky, which appeared in the October 1953 issue of Jewish Life, the predecessor to Jewish Action.

It would not be too difficult, as a matter of fact, to delineate the vital aspects of Yiddishkeit apparent in any of several sections of Brooklyn. Local patriotism, however, impels me to concentrate on my own “adopted homeland,” the Boro Park section of Brooklyn, USA . . . .

In point of fact, Boro Park has remained primarily a Jewish neighborhood for close to forty years or more. Sections like the East Side and Brownsville once enjoyed their heyday, had their share of glamour and were each designated at certain periods as the “Yerushalayim d’Amerika”; but Boro Park has continued to hold its own throughout population shifts, economic vicissitudes and the like. Even today, in the face of so many alluring new Jewish neighborhoods, it maintains its vitality with an uncommon and uncanny steadfastness.

The reasons for this constancy lie in a number of factors which I shall try to depict—not with scientific exactness, but rather with impressionistic fervor which comes from relishing the pleasant atmosphere and enjoying the warmth of a fine Jewish community. . . . 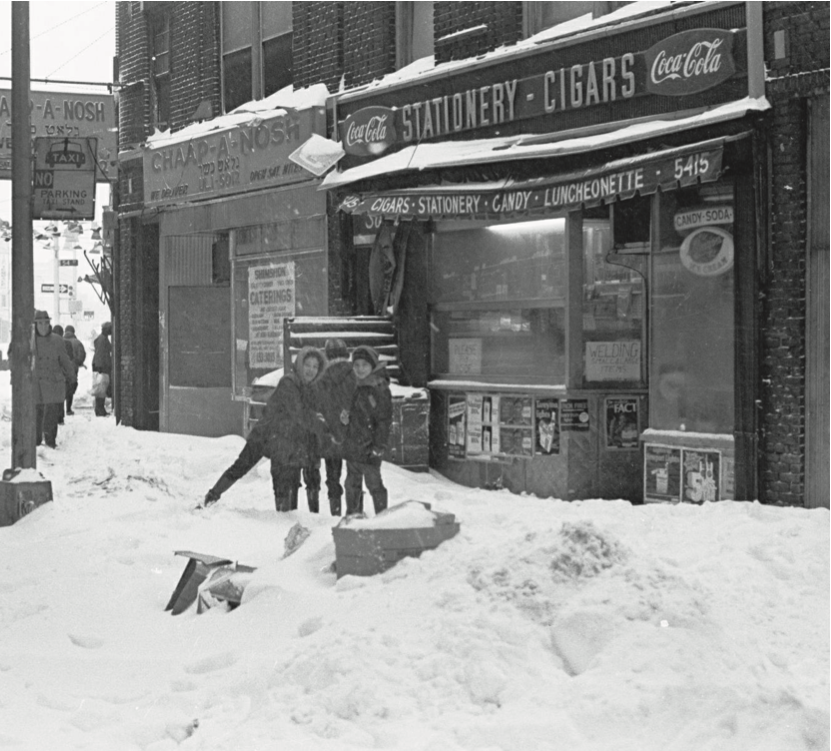 Children play in the snow outside of Chap-A-Nosh in Boro Park, under the 55th Street elevated train line, February 1978. Courtesy of Anthony Catalano/Flickr

Boro Park, the old residents tell me, received its name by virtue of the fact that it was once the park of Brooklyn. Almost all of its streets stretching in orderly fashion from 9th to 18th Avenues and 40th to 60th Streets in the southern part of Brooklyn—are lined with trees and contain private residences; and the neighborhood still maintains its park-like appearance. Its close to 70,000 Jewish families have been there—in the main—for years, staying on despite the rising barometer of their economic fortunes (“b’li eyin harah”). Fairly well-to-do “baalebatische” Jews dwell shoulder to shoulder (alleys between the houses of course) with their poorer brethren in a spirit of unity and democracy which would please any lover of America . . . .

The well-known Shmorei Emunah Congregation—to many the aristocrat of synagogues in the community—would hardly be able to cater to all of its members if it were not for its famous “Hashkomah—First Minyan” on the Sabbath and Festivals. The Young Israel of Boro Park has “standing room only” every Shabboth and cannot wait for the day that its new building, now only a steel shell, will take on “bones and flesh” . . . . 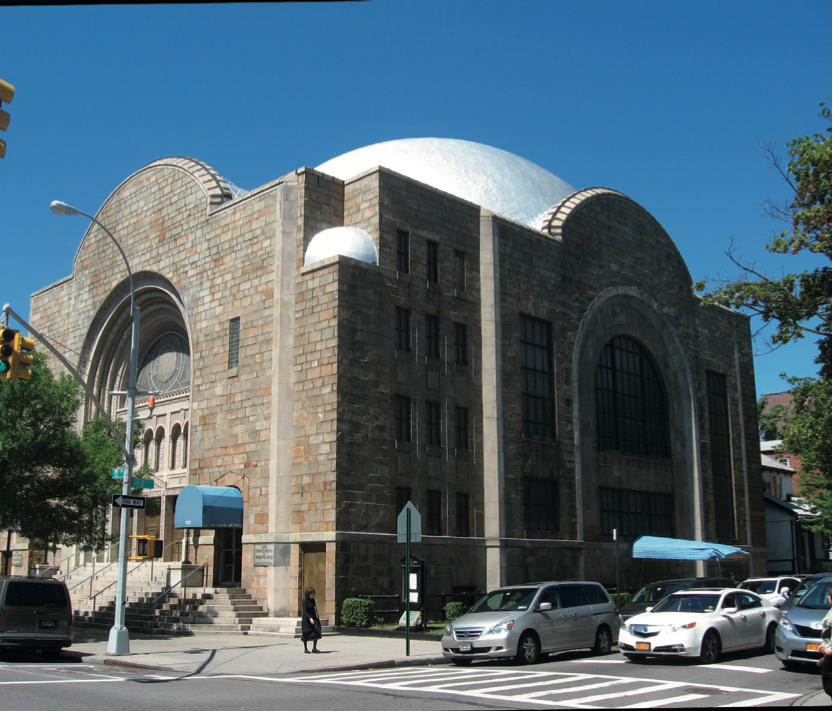 Perhaps in no other community in America (and I am a travelling man) have I seen all of the major Orthodox synagogues getting together on a common project. The “Joint Friday Night Forums,” sponsored by the four major synagogues—Shomrei Emunah, the Sephardishe Shul, Young Israel and Temple Beth-El (a “temple” only by virtue of its gala physical appearance; it is 100% Orthodox)—are a tribute to the spirit of cooperation which permeates our Boro Park.

Jewish education is sponsored by a few still thriving intensive Talmud Torahs and an impressive group of Yeshivoth Ketanoth. . . .  The Eytz Chaim Yeshivah . . .  Yeshivath Torath Emeth . . . Between the two, Boro Park’s young males do not go wanting for intensive Jewish education. Our two girls’ schools—the Shulamith School for Girls and the Beth Jacob of Boro Park are both doing a tremendous job for the distaff side of our younger generation . . .

The study of Torah is not limited to our Torah institutions, however. Our synagogues are not merely Houses of Worship; they are veritable Houses of Study. The Young Israel of Boro Park is one of the few synagogues in the country which sponsors the “Daf Yomi”—the daily study of a “blat Gemorah” instituted by the late Lubliner Rav . . . .

Most of the Jewish inhabitants of Boro Park have been in this country for many years. A large proportion of them were born here. All of the synagogues feature sermons or classes in English. The Jewish institutions sponsor ball games, picnics and card games. The fine ultra-modern dress shops, beauty parlors and haberdasheries on 13th Avenue do a thriving business. Boro Park is, indeed, as fine a representation of an American-Jewish community as you can find on these shores.

3.5 2 votes
Article Rating
This article was featured in the Summer 2020 issue of Jewish Action.