The education of our children has always been the bedrock of our existence. At the dawn of our birth as a people, God said about the Patriarch Abraham:

“I have shown him affection because he instructs his children and his posterity to keep the way of God, to do what is right and just . . .” (Genesis 18:19).

Abraham was chosen to be the father of the Chosen People because he understood that for God’s presence to be known in the world, it was the obligation of parents to educate their children with the message of God, and to set them forth on the path of righteousness. Throughout the millennia, Jewish parents have never shirked that responsibility; generation after generation, they have sacrificed and struggled to fulfill that sacred responsibility of passing on Torah and Mesorah to their children and grandchildren. The essence of our continuity lies in chinuch. Today, we are blessed with the freedom to teach our tradition publicly, and we can be proud of the many outstanding educational institutions that our community has established, which educate thousands of children each day to “keep the way of God, to do what is right and just.” We can be equally proud that the total enrollment in day schools and yeshivot in the United States continues to expand—with over 260,000 students enrolled in K-12 classes alone.

At the same time, we are equally cognizant of the profound challenge faced by our parents: the struggle to finance the outstanding Jewish and secular studies education our children receive. With the expenses of an Orthodox lifestyle at an all-time high already, the added responsibility of soaring tuition costs is a matter of the utmost, urgent communal concern. The gravity of the problem was further documented by the newly released Nishma Research Profile of American Modern Orthodox Jews. The survey covers many significant issues within the Orthodox community, and not surprisingly, documents a multiplicity of positions on a wide range of matters and questions that continue to occupy our collective thinking. While this is neither the place to discuss the survey’s methodology nor debate its underlying assumptions, it does make abundantly clear the extraordinary unanimity regarding the high costs of Jewish education. When asked to choose what they perceive to be the problems of greatest concern facing our community, an overwhelming 97 percent of respondents agreed that the cost of Jewish schooling is the number-one problem. This particular issue united respondents despite their differences of opinion on other matters, and testifies to the prominence of the “tuition crisis” on the contemporary Orthodox agenda.

Living an Orthodox Jewish lifestyle means balancing a budget that includes many expenses unknown or irrelevant to most Americans. Basics like meat and poultry cost more for the kosher consumer. Orthodox Jewish families are, on average, far larger than non-Orthodox families, adding to the costs of food, clothing and housing. The need to live in a neighborhood within walking distance of a shul adds to the already burdensome cost of housing. The costs of ritual observance—a sukkah, arba minim, matzah, tefillin, mezuzot, to name just a few—add to the expense of Orthodox Jewish life. Factor in the costs of synagogue membership, summer camp and programing, gap-year programs, support for mikvaot and other communal infrastructure, and the constant requests for assistance from yeshivot, kollelim and chesed organizations of all types (here, and in Israel)—the demands are endless, and virtually all are important and necessary components of Orthodox life. 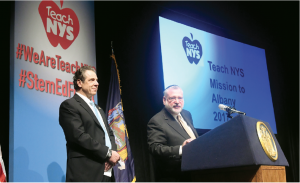 But these expenses pale in comparison to the most expensive component of our lifestyle: the cost of Jewish education. Estimates put the average cost of Jewish day school at $15,000 to $30,000 per child, per year. And that means that the average Centrist Orthodox family with 4.1 children (per the Pew Research Center) will pay $1 million in tuition costs—or more—before their children ever get to college, and these costs will be paid in after-tax dollars. Such costs are crippling, and the cascading consequences can neither be underestimated nor overlooked. We know, for example, that many parents limit the size of their families based on anticipated tuition costs. Others have opted to remove their children from yeshivot and send them to public schools—there is at least anecdotal evidence that this trend is accelerating. And then there are the very real, but often overlooked consequences on shalom bayit—two-wage earner parents left with barely enough time or energy for each other or for their children. And the inevitable tensions of determining what to forgo in order to pay the monthly tuition bill. Are we, we must ask, pricing ourselves out of the very Jewish education that has sustained us for millennia?

According to the Avi Chai Foundation’s Jewish Day School Census, student enrollment in Jewish day schools is growing at an extraordinary rate. That is a testament to our community’s fidelity, devotion and sacrifice, but by no means does it exempt us from doing our utmost to ensure the sustainability of the Jewish education system for the future.

At the OU, we believe that the solution to tuition affordability is a three-pronged approach. First, each of our institutions must do all they can to operate efficiently and minimize expenses. We salute the many professionals and lay volunteers who spend countless hours in dedicated service to our yeshivot and day schools, in an effort to pare expenses whenever possible.

Second, private philanthropy must continue to be a mainstay of our yeshivot and day schools. Such philanthropy is an obligation of the total community, not just the parent body.

But in the final analysis, cost cutting and private philanthropy alone cannot guarantee the fiscal sustainability of our institutions, or lower the cost of tuition—which must be our ultimate goal. Thus thirdly, the key to a sustainable future lies in our collective ability to persuade our state and local government instrumentalities to do their fair share in supporting the education of our children. The simple fact is that most public education systems are supported by property tax dollars. We pay these taxes, and in the process support the public school system of the area in which we live. However, little of these tax dollars return to yeshivot or day schools. We are not asking for support of the Jewish component of our education, but rather constitutionally acceptable reimbursements or payments to which every child is entitled, regardless of religion or where they attend school.

Here is a vivid example of the inequity in the distribution of government funding to nonpublic education. In the State of New York, roughly 16 percent of school-age children attend nonpublic schools. These 16 percent of New York children receive about 1 percent of government education funds. At the same time, New York State spends approximately $20,000 to educate each child who attends public school. In New York State alone, there are 140,000 school children attending yeshivot and day schools. That means that we are saving New York State over $2.8 billion per year by not educating our children in public schools. Shouldn’t some of those savings be returned to our schools? We believe the answer is clearly yes—and so the OU is working to correct this inequality and guarantee our children the same educational resources that their public school peers receive. 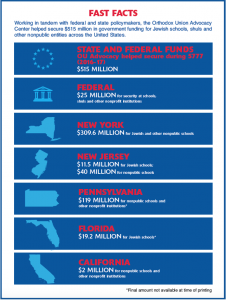 That is why the OU Advocacy Center founded Teach NYS in 2013. Since then, through the efforts of our talented staff, we have seen the beginnings of long-overdue changes. We have built a network of schools and parent advocates, hired top lobbyists and invested resources to advance legislation that maximizes the monetary benefits our schools can receive. Our initial efforts focused on New York State, where yeshivah and day school students represent more than half of the nation’s yeshivah/day school population. Since then we have expanded our efforts to New Jersey, Pennsylvania, Florida, Maryland and California which, together with New York, include almost 90 percent of the total number of yeshivah and day school students in the country. Each of these states now has a “Teach” organization; collectively they constitute our Teach Advocacy Network.

So far, the Teach Advocacy Network, working in tandem with the Catholic community and other nonpublic school advocacy groups, has made a huge difference (see the chart on the following page). The parents, students and member-schools involved in Teach NYS have more than doubled state funding for Jewish schools in New York over the past several years. And, for the first time, our schools will begin receiving reimbursement for science, technology, engineering, and math (STEM) programs. Before Teach NYS was founded, nonpublic schools received approximately $110 million from New York State. With Teach NYS at work, that number has increased to $345 million. Our Teach networks in Florida, Pennsylvania, California and New Jersey have also secured millions of dollars for security in Jewish schools. Through our hands-on “maximization” meetings, we connect with a wide range of schools and assist them in making certain that they are aware of, and seek, all government funding opportunities. We are committed to working with every Jewish community to make day schools more affordable through government advocacy.

The needle is moving, but we need to move it faster and more sharply. We will not be satisfied to maintain tuition at current levels. Our goal is to obtain sufficient government funding so that we roll back the current cost of Jewish education. We will continue to fight until this goal has been reached. However, we cannot do this alone. Politicians take our community’s needs seriously only if we take political advocacy seriously. Schools need to ensure their community members vote in every election. Community members need to make their voices heard by regularly e-mailing and calling their legislators and bringing their legislators to schools and community events. Our advocacy work has shown that when the Jewish community speaks about tuition with a loud, collective voice, legislators listen.

From its very inception, the Teach Advocacy Network has united parents and schools across the spectrum of our communities. While we may disagree on many issues, we unanimously agree that Jewish education is too expensive, and that we must do all that we can to change that. That unity of mission has enabled us to do what we do. We hope that our efforts will increase, and be joined by many others, to have the most profound impact possible.

Jewish education has always been, and will always be, a mainstay of our community, and the key to our survival. As Zalman Shazar (whose words until recently appeared on the 200-shekel bill) so beautifully articulated about Klal Yisrael:

. . . the nation that recognized the mandate of “veshinantam levanecha—And you shall teach them to your children,” since its original ascent onto the stage of history. This nation knew as well, even in its dark times, to safeguard the institution of obligatory education for all its children. Already in the days of Rabbi Shimon Ben Shetach . . . it made sure to place educators in every city and village, in every region and every province, and stipulated that any city that does not have a teacher residing in it, does not have the status of a city . . .

We have always made sure that every child receives the Jewish education he or she deserves, and now we must ensure that parents can fulfill their obligation of “veshinantam levanecha—And you shall teach them to your children,” without the current degree of financial and emotional burden. We will continue to do what we can to help, and we ask the entire community to join in our efforts, to ensure “ki lo tishachach mipi zaro,” “that [the Torah] will never be forgotten from the mouths of their offspring” (Deuteronomy 31:21).

Allen I. Fagin is the executive vice president of the OU.