This past July, I was invited to accompany the Nefesh B’Nefesh (NBN) summer charter flight, carrying 201 new olim to Israel. It was, without question, one of my most memorable experiences. This group of new olim spanned the demographic, religious and geographic spectrum of American Jewry. The youngest oleh chadash was a month and a half; the oldest was eighty-two. Thirty-four families; seventy-eight children; fifty-one singles. Fifteen young men and women were headed directly to the IDF as chayalim bodedim—“lone soldiers” who were making aliyah without their families. There were black velvet yarmulkes and kippot serugot, baseball caps and bare heads. These new olim hailed from nineteen states and Canadian provinces. And they were headed to communities spread across the length and breadth of Israel—to Acco and Ashkelon; Be’er Sheva and Beit Shemesh; Haifa and Holon; Yerushalayim and Modi’in; Neve Daniel and Chashmonaim; Ra’anana, Ramat Beit Shemesh, Tel Aviv and Tzfat. Those of working age would soon be employed as academics and social workers, physicians and programmers; chemists, accountants, music teachers and dancers; additionally, the group of olim included a speech therapist, a locksmith and a mashgiach.

The flight represented the remarkable diversity of the Jewish people, united by a common thread: each passenger was fulfilling a dream to live in Eretz Yisrael and contribute to its culture and its burgeoning economy.

Let me digress for a moment to pay tribute to NBN, led by the indomitable Rabbi Yehoshua Fass. Founded in 2002 with the mission to revitalize North American aliyah, NBN has brought over 50,000 new olim to Israel since then. Its remarkable success is built on incomparable attention to every detail of the aliyah process—the details that heretofore could make aliyah a mind-bending exercise in navigating the Israeli bureaucracy for everything from getting a driver’s license to obtaining telephone service. NBN has made the process as seamless as possible. It assists in job placement; in finding homes and matching the preferences and needs of potential olim to particular communities; in explaining benefit entitlements, and otherwise guiding and counseling prospective olim through the myriad aspects of relocation. Just a small example: years ago, new olim would spend a full day at the airport after a tiring journey having their citizenship documents processed. Today, on the flight, NBN staff handles all the paperwork so that when new arrivals get off the plane, they are already full-fledged Israeli citizens. Because of the wide array of NBN services—both before and following aliyah—the current retention rate for North American olim is 93 percent. 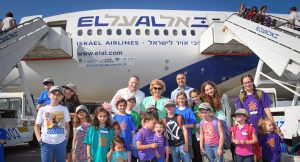 Some 200 new olim arrived in Israel from North America this past July. Rabbi Fass is on the left.

One of the most moving aspects of the NBN flight was watching as the olim chadashim deplaned. Some were draped in Israeli flags. Several wept for joy. Others dropped to their knees to kiss the ground. The welcoming ceremony was particularly moving. Surrounding the new olim were contingents of students from schools and youth groups; hundreds of chayalim; family members and friends—all singing and dancing in the blistering heat that didn’t seem to moderate the unabashed joy of the “welcome home” extended to 200 new Israelis. I could not avoid focusing on this rare display of achdut Yisrael. Gallons of ink spilled over the controversies surrounding conversion laws and egalitarian prayer space at the Kotel were washed away by the singing and dancing, by the hugs and kisses, as new olim were embraced and welcomed. These manifestations of the unity of the Jewish people are, regrettably, far too infrequent. But when they happen they are powerful reminders that what binds us together is far stronger than what separates us. This same scene of achdut Yisrael was on full display several weeks later when I had the privilege of attending Yom NCSY—an iconic evening when all of the NCSY and Yachad summer program participants in Israel come together for a night of celebration. This year, over 2,400 teens and staff, from thirteen different NCSY and Yachad programs, joined together at Park Ra’anana—teens from NCSY Kollel and Michlelet, from our travel and leadership development programs, and our internship and chesed programs; and over 480 public school teens from our extraordinary The Anne Samson Jerusalem Journey (TJJ). I was reminded that night, as I had been at the celebration for new olim, that it is indeed possible for the Jewish people to unite not only in the face of tragedy; not only when Jewish teenagers are kidnapped and brutally murdered; not only when a family is massacred as they sit at the Shabbat table to celebrate the birth of a child—but that Jews can unite in celebration as well as in tragedy, and that our peoplehood and our commonality are far stronger than we often acknowledge.

But back to aliyah. As I watched the welcoming ceremony, I could not help but wonder whether we, as a community, view yishuv Ha’aretz as a basic tenet of our spiritual aspirations. Have we maintained our sense of Religious Zionism with aliyah seen as its ultimate manifestation? Or have we found sufficient substitutes for that ultimate step—more frequent visits to Israel; increased philanthropic support for Israeli Torah and social service programs and institutions; the purchase of homes and apartments in Israel for use during yamim tovim and vacations; more intense advocacy efforts for Israel’s safety and security; and ever greater emphasis on teen travel to Israel, post-high school gap year(s) experiences; collegiate years abroad, et cetera? In short, must the Religious Zionist passion be a binary, all or nothing conversation only (aliyah or not), or is there a continuum here that allows for a more robust expression of our love for Eretz Yisrael?

The questions are manifold and, in many respects have received insufficient attention: What does it mean to be a Religious Zionist? Does Religious Zionism, short of aliyah, have real meaning and purpose in our religious experience? Is living in our “galut of choice,” now after seventy years of Jewish statehood, a legitimate option for those who pray thrice daily: “Vl’Yerushalayim ircha b’rachamim tashuv,” “To Jerusalem, Your city, may You return in compassion”?

Can I, as a devout American Jew, nonetheless share in Hashem’s plan for Jewish destiny? How are we to reconcile, from a hashkafic perspective, the centrality of Yerushalayim to our religious experience—a theme that we explored so thoroughly during our recent Yom Yerushalayim program—with our continued residence in and commitment to Diaspora life? Each of these questions is central to our religious life, and yet scant attention seems to be paid to them in the American milieu.

Perhaps most pressing on the communal agenda is how we educate our children about Israel and the Zionist project. My sense—albeit at best anecdotal—is that Israel (its language, culture, geography and history) and how Israel fits into our overarching Torah values play a diminishing role in day school education. When I was in elementary school, “Olameinu” was required weekly reading. I learned Ivrit b’Ivrit. How many of our schools today teach real fluency in the Hebrew language, let alone tackle the beauty of Hebrew literature and poetry?

In high school, my curriculum was rich in Israeli history, geography and culture. I could list every Israeli political party, and the number of seats each held in the Knesset. How many of our teens today can take a map of Israel and correctly identify the location of Yehudah and Shomron, or Ashdod or Modi’in? How many could name the president of Israel or its national theater? And, more importantly, how many have an even passing familiarity with the Torah of Rav Avraham Yitzchak HaCohen Kook, and others, on the centrality of Israel to our Torah way of life?

I asked several distinguished educators for their viewpoints. Rabbi Eliezer Rubin, head of school at the Joseph Kushner Hebrew Academy in Livingston, New Jersey, sees Israel education as “one of the most pressing educational responsibilities of our generation . . . Israel advocacy requires Israel education.” At Kushner, a mandatory Jewish history course covers the origins of modern Zionism and the history of Israel. Students write a research paper to better understand the meaning of Zionism and the centrality of Israel, beyond the limited scope of a Jewish homeland free of persecution. Commemoration of Yom Ha’atzmaut includes an “anti-Israel” fair so that students have the opportunity to test themselves and their advocacy skills in a mock simulation of what it would be like to be shouted at by liars and slanderers. 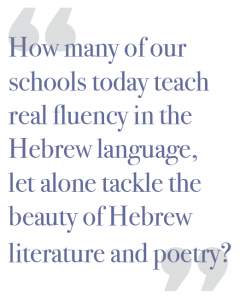 Rabbi Ari Segal, head of school at Shalhevet High School in Los Angeles, seeks to carve out space within the limudei kodesh curriculum “to teach Religious Zionism, its issues, its meaning, its implications—in depth.” Faculty members are encouraged to spend time studying in Israel. Rabbi Joshua Kahn, head of school at Yeshiva University High School for Boys, points with pride to his school’s innovative exchange program with one of the elite Religious Zionist yeshivah high schools in Israel—Yeshivat Makor Chaim. Each year a number of YUHSB students spend five weeks at Makor Chaim; in turn, several Makor Chaim students join the students at YUHSB. Rabbi Kahn likewise points with pride to the large number of alumni who have chosen to make aliyah— including NBN Founder Rabbi Yehoshua Fass.

While some schools stress such programming, others do not. Many schools do not recite the Tefillah L’shlom Hamedinah. Israel education and Religious Zionism play little or no part in the curriculum. While Yom Ha’atzmaut may be celebrated, says Rabbi Alan Berkowitz, principal of Magen David Yeshivah Elementary School in Brooklyn, there is very little discussion about the State of Israel.

The programs described above—and others like them—while enormously important in maintaining and deepening students’ commitment to Israel, may still not fully capture the fullness of the Religious Zionist hashkafah. Rabbi Dr. Jay Goldmintz, a distinguished educator and faculty member at Ma’ayanot Yeshiva High School for Girls in Teaneck, New Jersey, refers to the challenges posed by “the lack of rootedness in ideology,” and contends that “the lack of understanding of Religious Zionism creates a huge gap with the Dati Leumi community in Israel.”

As we continue to grapple with the best way to animate our Religious Zionist sentiments, we can give full throated support to those who have chosen to make aliyah and to NBN, which encourages them to fulfill their dream.

Allen I. Fagin is executive vice president of the OU.