Few possessions made it over the trans-Atlantic journey of my maternal grandparents, Samuel and Rachel Ehrlich, from Europe to America, but among the most cherished heirlooms salvaged from that time are my grandfather’s machzorim, printed in 1870 in Warsaw. Every Rosh Hashanah and Yom Kippur, I make it a point to daven Unetaneh Tokef from my zaide’s machzor. As I turn the yellowed, tear-stained pages, grown stiff with age, I am transported to a pre-Holocaust world, a world that vanished but that, in many respects, has re-emerged and flourishes in America.

One of the most fascinating pages of the machzor is the “Tefillah B’ad Shelom Hakeisar—the Prayer for the Welfare of the Tsar,” a text that offers deep insight into the atmosphere of the time. The prayer describes the Russian monarch (Poland was then under the rule of the Russian Empire) as “Our master, the tsar, the great, the righteous, the upright,” and then goes on to offer blessings to Tsar Aleksandr Nikolayevich (Aleksandr II); his wife, Tsaritsa Maria Aleksandrovna; their son and heir to the throne, Aleksandr Aleksandrovich (Aleksandr III); his wife, Maria Fyodorovna; and various other members of the royal family.

This tefillah is especially astounding given that historically the Russian tsar was no friend of the Jewish people. Yet for centuries, despite the burden of an oppressive and anti-Semitic government, Jews throughout the Russian Empire prayed for the tsar’s well-being.

That Jews offered prayers for the well-being of their rulers throughout the Diaspora dates back for millennia. Rabbi Chanina Segan HaKohanim stated (Avot 3:2): “Pray for the welfare of the government, for if not for the fear of it, people would devour their friends alive.” A world without a strong governing body is a world in which chaos and anarchy reign, and Rabbi Chanina, appreciating the important role of government in our social order, encouraged us to pray for the success of our rulers. In fact, Rabbi Chanina was echoing the voice of the Prophet Yirmiyahu who taught (29:7): “Seek the welfare of the city to which I have exiled you, and pray to God on its behalf; for with its peace, you will have peace.” This idea is repeated in the Talmud (Avodah Zarah 4a):

Just as in the case of fish of the sea, where any fish that is bigger than another swallows the other, in the case of people, were it not for the fear of the ruling government, anyone who is bigger than another would swallow the other. And this is as we learned in a mishnah, that Rabbi Chanina Segan HaKohanim says: “Pray for the welfare of the government, for if not for the fear of it, people would devour their friends alive.”

The author of the work Seder Hayom, Rabbi Moshe ben Yehuda ibn Mechiri (sixteenth century), goes so far as to consider it a mitzvat asei midivrei kabbalah (a positive commandment from the Prophets) to pray for the welfare of the king, basing it on the verse in Yirmiyahu.

But unlike many other Jewish prayers that were canonized at an early date, the prayer for the sovereign was at first recited in many different forms. The earliest recorded prayer for a monarch can be found in the town records of Worms from the year 1096.1 That prayer was recited in the style of a Mi Shebeirach that we are familiar with. A similar prayer can be found in a siddur from Spain printed around the year 1300.2 In the Sefer Avudraham (fourteenth century), we find that “the custom is to bless the king and to pray to God to help him and empower him over his enemies.” However, the exact wording of the prayer is not mentioned.

At the end of the fifteenth century, siddurim begin to appear containing a formalized prayer for the welfare of the reigning monarch.3 That tefillah begins with the phrase: “Hanoten teshuah lamelachim u’memshalah lanesichim—He Who gives victory to kings and dominion to nobles.” It is a beautiful, poetic prayer, drawing heavily on verses and metaphors from Tanach. While we do not know who composed this prayer, or exactly when it was composed, a short time after its initial appearance it became popular across the European continent. One can find this prayer, with little variation, in prayer books and machzorim from across Europe and beyond: from Spain, Poland, Germany, Italy and elsewhere—even from Yemen.

A siddur from Venice in 1622 (with a Spanish translation) includes the prayer of Hanoten Teshuah with the following instruction:

“Agora dira el kazan esta bedicio que es por la conservacion del estado Real—now the cantor will recite this blessing, which is for the preservation of the government.”4

Rabbi Menashe Ben Israel, who famously lobbied in the seventeenth century for the return of Jews to England following their expulsion, cites the prayer Hanoten Teshuah in his work The Humble Addresses to His Highness the Lord Protector, dated 1655.5 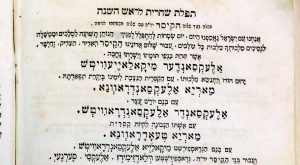 Text of “Prayer for the Welfare of the Tsar” from an 1870 machzor printed in Warsaw. The prayer offers blessings to Tsar Alexsandr II and to each member of the royal family, specifying each member by name. Photo: Josh Weinberg

For the most part, the prayer was printed with the name of the contemporary monarch and his family, and unlike the rest of the siddur which did not receive many updates, this prayer changed over time as monarchs shifted, creating a fascinating historical curiosity for collectors of old siddurim.

Hanoten Teshuah is still recited in most congregations in Europe, though it is not as common in the US. In Israel, the general custom is to recite instead the Tefillah L’Shelom HaMedinah, composed by the former chief rabbis of Israel, Rabbi Isaac HaLevi Herzog and Rabbi Ben Zion Chai Uziel, in 1948.

Ever since the Jewish nation was dispersed in galut, we have found ourselves under the sovereignty of countless rulers and assorted forms of government, often despotic kings and evil sultans, wicked emperors and vicious dictators. Nevertheless, Yirmiyahu HaNavi and Rabbi Chanina remind us that the success and well-being of the ruler under whose authority we find ourselves can only benefit us, and that we should therefore pray for their welfare. And for hundreds of years, Hanoten Teshuah was the prayer recited to express our supplication to God that He protect our temporal rulers and allow the Jewish people to experience favorable, enlightened treatment under their rule. Such was the case regardless of how fond the Jews were of the particular monarch, and regardless of his or her treatment of the Jews. In fact, according to one scholar, it is possible that the prayer of Hanoten Teshuah was originally composed for King Ferdinand II of Aragon, who later expelled the Jews from his empire in 1492.6

The Chatam Sofer, in his responsa (vol. V, Hashmatot, no. 190), extols the virtues of praying for and honoring a king, and notes that God commanded Moshe Rabbeinu to show honor even to Pharaoh (see Rashi to Shemot 11:8), despite his being a despotic ruler who cruelly tortured the Jewish people.

As I turn the pages of my grandfather’s machzor, I often marvel at how different my experience as a Diaspora Jew is compared to that of my zaide. The blessings of freedom surround us—the freedom to practice our religion as we choose; to educate our children without interference or imposition; to express our viewpoints openly and to participate actively in the civic process. Over the past few years, I have been honored to be a guest at the White House and the State Department on various visits representing the Orthodox Union. It is, I believe, a profound blessing from Hakadosh Baruch Hu that Jewish Americans—indeed, demonstrably Orthodox Jewish Americans—are warmly welcomed in the halls of government. That I can sit with the President of the United States, proudly wearing a yarmulke and speaking my mind freely on issues of national concern, is no longer a novelty but an American fact of life.

How blessed we are to live in this country, and particularly in these times. Last year I attended the White House’s Yom Ha’atzmaut reception, hosted by Vice President Mike Pence. While the White House has long acknowledged Jewish holidays and hosted Chanukah parties and Pesach Seders, recognizing Israel’s Independence Day is a whole new level of outreach to our community.

Never since Israel’s founding in 1948 has the American government marked the country’s independence with such a celebration. Honoring Israel’s independence not only represents our government’s recognition of the centrality of Israel to the Jewish people, it also emphasizes America’s unique bond with Israel. What other country has its Independence Day recognized at a White House ceremony?

Vice President Pence’s remarks on that occasion were especially moving.

“Thank you for being here today at the White House to celebrate this day, the anniversary of a moment that will be remembered for eternity,” he began. “You’re all here, all of you, regardless of your home, your creed, because on this day, the fifth day in the month of Iyar in the Hebrew calendar in 1948, nothing short of a miracle occurred.

“Israel is an eternal testament to the undying fortitude of the Jewish people, to the unfathomable power of human freedom, and to the unending faithfulness of God. Indeed, though Israel was built by human hands, it’s impossible not to sense that just beneath their history lies the hand of Heaven.”

How incredible to hear these words from the mouth of the Vice President of the United States.

We have so much to be grateful for from this administration: the move of the United States embassy to Jerusalem, despite enormous international pressure to again defer doing so, an act of extraordinary courage and an historic display of American support for Israel; the decision to stop the flow of US funds to UNRWA; the cutback of funding to the PA and the passage of the Taylor Force Act; the re-imposition of onerous economic sanctions on Iran in an effort to limit their incitement of, and support for, terrorist activity across the Middle East; and unwavering American support for Israel in the United Nations and around the world. It is not surprising that Israeli Ambassador Ron Dermer stated recently that under the Trump administration, the US government has been the most supportive of Israel since the administration of Harry Truman.

And yet, many in our community, myself included, cringed at the President’s comments in the wake of the Charlottesville demonstrations, appearing to give tacit approval to white nationalist sentiment. And surely many of the President’s remarks—often ad hominem, crude and misogynistic at best—must be anathema to anyone whose Torah values define them.

And hence we turn to prayer as we have for millennia—prayer for the well-being of our government and our elected officials; prayer that the benevolence of our government continue, and that it provide the Jewish people, and Israel, with safety and security. And prayer that our leaders be given Divine blessing to carry out their duties with inspired wisdom and good judgment as well as with decency, humanity and civility. And regardless of the administration in power—whether we agree with our elected leaders always, sometimes or not at all—it is incumbent upon us to offer shevach, praise, and hoda’ah, gratitude, to Hashem for giving us unprecedented freedom in the midst of the Diaspora. Let us never take these freedoms
for granted.

Allen I. Fagin is executive vice president of the OU.