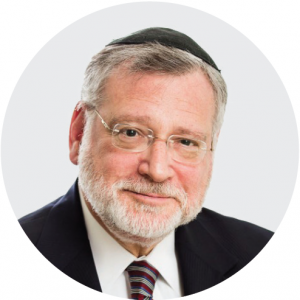 The emotional roller coaster represented by the transition from Tishah B’Av to Shabbat Nachamu is, perhaps, reflective of our remarkable ability to compartmentalize moments of extraordinary tragedy and incomparable joy. Throughout the peaks and valleys of our history as a people, we find that often eras of great misfortune were followed by periods of extraordinary revitalization and a surge of creativity in Jewish thought. After the destruction of the Beit Hamikdash, the completion of the great corpus of Torah Sheb’al Peh occurred with the writing of the Mishnah and then the Talmud. In exile, after great calamity, our rabbis had the strength and fortitude to go on and create vibrant centers of Jewish life and learning. Following the terrible destruction of Ashkenazi Jewry during the Crusades, the schools of the Tosafists emerged and thrived. After the upheavals and dislocations of Medieval Spanish Jewry, kabbalistic thought and creativity flourished. Chasidism emerged after the terrible trials of Tach Vetat (the Khmelnitsky massacres).

The recurring pattern of tragedy and consolation was firmly in our minds when, shortly after Shabbat Nachamu, my wife and I visited the Theresienstadt (Terezin) concentration camp in the Czech Republic. Terezin holds special meaning for us. My wife’s paternal grandparents, Josef and Nanny Rosenberg, a”h, were imprisoned at Terezin; both survived, were liberated in 1945 and (after several years in a displaced persons camp) found their way to the Breuer’s kehillah in Washington Heights.

Terezin (about an hour’s drive northwest of Prague) was established by the SS in a fortress town, located in the Protectorate of Bohemia and Moravia (the German-occupied Czech lands). The camp served two main purposes: its primary purpose was as a waystation to the extermination camps, a waiting room for death. Secondarily, Terezin served as an elaborate hoax—allowing the Nazis to claim they had created a “retirement settlement” for elderly and prominent Jews, in order to mislead the world about the true intentions of the Final Solution. Elaborate steps were taken to persuade the Red Cross and others that Terezin was a “model” camp for Jewish refugees. In fact, behind its elaborate façade, Terezin was part of the Nazi extermination machine. Over 150,000 Jews passed through its gates, mostly from the Protectorate, Germany and Austria. The majority came from five cities: Prague (40,000), Vienna (15,000), Berlin (13,500), Brno (9,000) and Frankfurt (4,000). Over 35,000 Jews died while at Theresienstadt, most of malnutrition and disease. Almost 90,000 were sent from Theresienstadt to extermination camps between 1942 and 1944; primarily to Auschwitz and Treblinka. Almost all the deportees perished. In all, fewer than 23,000 Jews who passed through the gates of the “retirement village” of Terezin survived its horror. 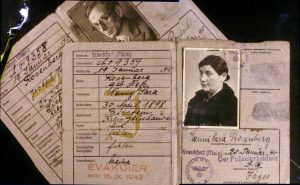 Identity cards provided by the Nazis prior to Mr. Josef and Mrs. Nanny Rosenberg’s entry into Terezin.

The story of the Rosenbergs’ survival in Terezin is one of those inexplicable twists of fate that characterizes many of the accounts of Holocaust survivors. Josef Rosenberg had served in the German army during the First World War. One of the guards at Terezin had served in his unit, and remembered him. Somehow, he saw to it that Josef and Nanny Rosenberg never appeared on the rosters of those slated for deportation to the extermination camps in the east.

The saga of Jewish survival has, over the centuries, fascinated Jews and non-Jews alike. Mark Twain famously observed:

“The Egyptian, the Babylonian, and the Persian rose, filled the planet with sound and splendor, then faded to dream-stuff and passed away; the Greek and the Roman followed, and made a vast noise, and they are gone; other peoples have sprung up and held their torch high for a time, but it burned out, and they sit in twilight now, or have vanished. The Jew saw them all, beat them all, and is now what he always was, exhibiting no decadence, no infirmities of age, no weakening of his parts, no slowing of his energies, no dulling of his alert and aggressive mind. All things are mortal but the Jew; all other forces pass, but he remains. What is the secret of his immortality?”

As religious Jews, we believe that the eternity of the Jewish people lies in God’s promise to our patriarchs (Vayikra 26:44): “V’af gam zot bihyotam b’eretz oyveihem lo mi’astim v’lo gi’altim lichalotam lihafer bi’riti itam ki Ani Adoshem Elokeichem—Yet, even then, when they are in the land of their enemies, I will not reject them or spurn them so as to destroy them, annulling My covenant with them: for I am Hashem, their God.”

As Dovid Hamelech writes in Tehillim (94:14): “Ki lo yitosh Hashem amo v’nachlato lo ya’azov—For Hashem will not forsake His people; He will not abandon His inheritance.”

As we walked through the streets and barracks of Terezin, images of unspeakable cruelty surrounded us. How could members of the human race sink to such levels of depravity? And yet, out of catastrophe on an unparalleled scale, the Jewish people emerged—not just as survivors, but proud, confident and eager to flourish. The greatest tragedy gave birth to the State of Israel and the rebuilding of our national homeland. And, in communities across America, bastions of Yiddishkeit were solidified, with vibrant Jewish life, and Torah learning on an unprecedented scale. Our indomitable spirit has allowed us not merely to survive, but to thrive and prosper.

She told him, with the strength of faith that only a survivor could muster: “Max, you need to stop; we don’t run anymore.”

Post-Holocaust theology is replete with multiple approaches to attempting to understand the incomprehensible. Thinkers from Rabbi Joseph B. Soloveitchik to Emil Fackenheim, from the Satmar Rav to Rabbi Avigdor Miller to David Weiss Halivni have all offered unique philosophical and hashkafic pathways to understanding the unthinkable events of the Holocaust. In the end, perhaps this much is clear: we must, all of us in our own way, remain obligated to remember; and to carry forward the hopes and dreams of those holy souls who did not live to see their own realized. We may not be able to explain the darkness, or begin to comprehend the horror. But for the person of faith, the proof of the eternal nature of the Jewish people surrounds us.

A few years ago, I had occasion to visit the Czech Republic as part of a small delegation to thank the Czech president at the time, Václav Havel, for his outspoken support of the State of Israel. While there, I had the opportunity to meet with Norm Eisen—a wonderful Jew, and an outstanding public servant—who was then serving as the United States ambassador to the Czech Republic. Eisen, whose mother had been from Czechoslovakia, served as an aide in the Obama White House prior to his appointment as ambassador. When President Obama was about to make a state visit to the Czech Republic, and aware of Eisen’s familial background, he invited Eisen to accompany him on the visit. Eisen described the irony of his visit as follows: “They took my mother out on a cattle car, and I returned on Air Force One.” Despair and triumph—the story of Jewish history.

Rabbi Israel Meir Lau, the former chief rabbi of Israel, concludes his outstanding book, Out of the Depths, with the following story:

My oldest son, Moshe Chaim, became a bar mitzvah on the Shabbat when we read the biblical account of the Israelites’ battle with Amalek. I had not intended to make a speech on this occasion, but the planned speakers pressured me. . . . So I spoke about the last verse in the chapter of Exodus: “The Lord maintains a war against Amalek, from generation to generation.” We cannot fight the enemy Amalek—the nation or the phenomenon—with weapons or with ammunition. Rather, we are obligated to fight this battle in every generation, each generation passing on our heritage to the next. The struggle for the continuity of generations is the true battle, and the great spiritual-divine victory of Israel against the adversary Amalek. Our victory in the war against Amalek is that my son, Moshe Chaim Lau, is continuing the heritage of his grandfather, my father, Rabbi Moshe Chaim Lau, who went up to Heaven in a tempest.

Moshe Chaim is the first candle in the private Hanukkah menorah I have been privileged to create. My wife is the base of the menorah, from which the candles, our eight children, went out into the world. And I am the gabbai, whose role is to help light those candles so that they will spread their light and proclaim, each in a special way, the miracle of the victory of eternal Israel. 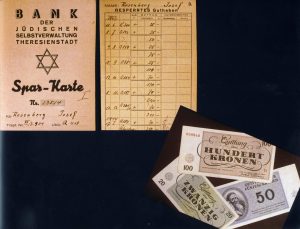 To deceive the Red Cross, phony bankbooks and currency were distributed at Terezin.

Herein lies the secret of our eternity. The refusal to submit. The fortitude to constantly look forward, while never forgetting our past. And hence, our unceasing commitment to the transmission of our heritage, with single-minded purpose and, often, against all odds.

Josef Rosenberg died in the early 1960s. Nanny Rosenberg lived to 101. She was a woman of remarkable faith; I recall her davening three times daily, with palpable kavanah. With all she had endured, her emunah in Hakadosh Baruch Hu was the defining characteristic of her life. She refused to allow the travails of the past to define her; to the contrary, she embraced life in all its multifaceted dimensions.

I vividly recall the following incident which, for me, epitomized the unique perspective of one who had confronted death, destruction and tragedy, and yet emerged with a fervent faith in God’s benevolent protection of His people. It was 1990, in the weeks leading up to the first Gulf War. The Iraqis pledged that if hostilities commenced, their missiles would rain down on Israeli cities. Our oldest son was learning in Israel at the time, at Yeshivat Sha’alvim. As the war drew closer, my father-in-law, a”h, recalling his own separation from his parents following Kristallnacht, pleaded with my wife and me to bring our son home from Israel. We tried, in every way possible, to evade his increasingly fervent entreaties. Finally, my wife told her grandmother about our dilemma. She assured us that she would take care of it; and she did. Shortly thereafter, she invited my father-in-law to her apartment. And there she told him, with the strength of faith that only a survivor could muster: “Max, you need to stop; we don’t run anymore.”

During her life, Nanny Rosenberg was blessed with numerous grandchildren and great-grandchildren. And she lived to see—to hold and to bentch—two great-great grandchildren. One, our eldest grandson, graduated this past June from Yeshiva University and recently was married. Together with his wife, he will be in Israel this year, continuing his yeshivah studies. Nanny and Josef Rosenberg would have been proud. This is why we went to Terezin—to remember and to celebrate the eternity of the Jewish people.

Allen I. Fagin is the executive vice president of the OU.