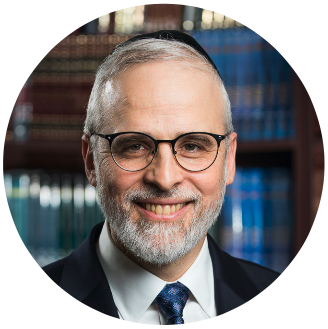 From Yosef’s work in the Egyptian royal court through the efforts of the modern-day shtadlanim,1 public advocacy has been a constant feature of Diaspora life. Today, much of this work is being done under the aegis of Jewish organizations, including the significant efforts invested by the OU Advocacy Center—our federal advocacy program—and the OU’s Teach Advocacy Network, active in many state capitols. Given the charged political and social climate and the significant changes being implemented in both the legislatures and the courts, it is worth considering and defining our current mission in the work of advocacy.

The example of Yosef is particularly instructive in that it includes elements beyond the simply self-serving. First, Yosef rose to prominence based on the vital benefits he brought to the Egyptians. Furthermore, his engagement went beyond the material and transactional, as according to our Sages he used his position of influence to compel the Egyptians to undergo circumcision.2 Apparently, Yosef was not satisfied with managing Egyptian resources to support the Jewish community, but rather sought to influence Egyptian society and address its characteristic immorality.3 This desire may have been an expression of the Jewish mandate to bring G-d’s light to the world around us, letakein olam b’malchut Shakkai, or it may have been simply in our own interest to improve the moral climate of our host country. In any case, the Yosef paradigm reminds us that our efforts within society must not be limited to what we can extract from that society but must consider what we can contribute to it, both materially and spiritually.

This is implicit in the Talmudic tradition that it was on Rosh Hashanah that Yosef was freed from prison to assume his position as Egyptian viceroy.4 Rosh Hashanah is the one Jewish holiday that does not commemorate a specifically Jewish event, but rather marks the anniversary of the world’s creation, a universal experience. The unique prayers on Rosh Hashanah, pleading for a time when all will join in recognition of G-d and in commitment to His values, are focused on the spiritual well-being of all of mankind. We stand on Rosh Hashanah as G-d’s Chosen People committed to seeing our recognition of G-d shared by the entire world, in line with His intention in Creation. Yosef was the personification of this goal, as his leadership in Egypt was driven by his faith, his Divinely inspired wisdom, and his moral leadership.

Undoubtedly, we must primarily advocate for our own needs, ensuring that our community has the freedom, security and resources to flourish. As Americans, we must not forgo or concede our equal rights, and as Jews we should confidently encourage our host country to help our community thrive. The Talmud5 records how at the End of Time, the Persians and the Romans will demand a reward for the Jewish people’s spiritual development while part of their empires, claiming that all the infrastructure they had built was to support the Jews’ engagement with Torah. And while their claim for a reward will be rejected due to their ulterior motives, the Rav of Brisk6 explained that their assertion is factually correct. G-d had indeed allowed their societies to thrive to create the ideal host conditions for a successful Jewish exile. As people of faith who see the success of the Jewish mission as core to the world achieving its purpose, we should have no hesitations about inviting America’s investment in our success.

While we need not be shy about advocating for our community’s needs, we must also be on guard against the limited vision imposed by our own “ulterior motives.” We will be most successful if we do not limit our advocacy to the transactional. We need to think not only of the critically important ROI (Return on Investment) that can be measured in security and education dollars but also in terms of SROI (Social Return on Investment), the extent to which we improve our society for all its inhabitants. Focusing on our rights as well as on our responsibilities allows us to move beyond the parochial while uplifting the advocacy for our own needs too.

Consider the application of this principle to our current core areas of shtadlanut:

The Orthodox community invests significantly in advocating for increased government support for non-public education. We can make the case for such funding with simple arithmetic, arguing that our private schools are saving the public school system X dollars per child. But there is so much more. We must share the success story of private Jewish education and its contribution to the broader society, demonstrating how our school system is producing a cadre of responsible citizens who are uplifting the surrounding community. And when we advocate for our institutions, we can simultaneously be on the forefront of advocacy to strengthen the public schools—not simply to neutralize the traditional opposition of the teachers’ unions, but because of a genuine desire to meet the critical need of improving the education and lives of the broader American public. For example, when we consider the bipartisan legislation initiated in the wake of the Uvalde school shooting that would include increased mental health support in schools, we must concern ourselves with effectively addressing this critical societal issue within the public school system while advocating for the inclusion of non-public schools.

Focusing on our rights as well as on our responsibilities allows us to move beyond the parochial while uplifting the advocacy for our own needs too.

We have advocated successfully for both federal and state security dollars for nonprofits, especially for vulnerable sites within the faith community. These are critical, life-saving accomplishments. But are these the limits of our advocacy on the issue of antisemitism? Will we satisfy ourselves with building more hospitals at the foot of the rickety bridge? Or should we also be bringing our advocacy to address the issue at its source, helping society move past the mass production of hatred, especially within universities?

We have always needed to be guardians of religious freedom, protecting our ability to practice our faith without being otherwise limited or coerced by government. At this juncture in American history, our right to worship and present ourselves in a uniquely Jewish manner is protected. What is more vulnerable—because of broad and aggressive shifts in society’s value system—is our ability to live free of governmental intrusion upon our religious values. And while we may consider ourselves moderately successful if we maintain the right to live in accordance with our belief system, it is incumbent upon us as standard-bearers of a strong and universal moral tradition to make the case for our most hallowed principles, helping society at large appreciate why these values should matter to them. As the world redefines morality, we must share a humble but firm confidence in deracheha darchei noam, the true goodness and pleasantness of the path defined by the Torah.

Final Thoughts: Staying above the Fray

Pirkei Avot7 teaches us to pray for the well-being of our government, “for without the fear it inspires, people would swallow each other up alive.” Our current experience has demonstrated that this is not hyperbole. In the literal sense, violence is epidemic in our society. Government has been ineffective at stopping the spiral of human destruction wrought by frequent mass shootings and daily gun violence. Solutions are elusive because of government dysfunction that is both the cause and the result of a societal polarization that rejects considering both sides of an issue and that too often appears more driven by self-interest than by concern for the common good.

The prophet Yeshayahu8 describes a time toward the End of Days when ha’emet ne’ederet, simply translated as “truth is absent.” The Talmud9 suggests a more elaborate meaning, connecting it to the Hebrew word eder (flock), and translates instead that truth “will cluster together as flocks and disappear.” Some have suggested that the meaning behind this is that the Talmudic “flocks” refer to factionalism, where loyalty to the party and opposition to the competing group define and direct policy at the expense of truth.

The search for truth depends on the recognition and incorporation of the valuable elements of opposing perspectives. This is perfectly illustrated by the Talmudic rule “halachah k’divrei hamachria,” which teaches that when there are two opposing opinions and a third option is presented that bridges the two, we adopt that third opinion.10 Rashi11 and the Tosafot12 note that this rule is only true when the third opinion explicitly accepts both sides of the argument, while limiting their application. Clearly it is the one who is ready to acknowledge the merits of both sides of the argument who is most likely to find the truth.

The current governmental climate within which we do our work of advocacy is infected by extreme partisanship, an inability to take the other side seriously. As the Orthodox Jewish community, we need to transcend self-interest and steer clear of polarization. We must strive to represent a balanced and nuanced view that acknowledges and addresses the complexity of the issues. We must do so not only because we are in a country where the balance of power shifts every two to four years, making it a strategic imperative to maintain relations on both sides of the aisle but also because a thoughtful and balanced approach is the kind of mature voice that must characterize Klal Yisrael. We must help restore balance, integrity and goodness to the public discourse, bringing a passion for truth and peace that can help elevate and heal our country.

1. Shtadlanim is a term for well-connected Jewish figures tasked with influencing public policy on behalf of the larger Jewish community. See the cover story of the winter 2021 issue of Jewish Action.

3. The Egyptians were characterized as shtufei zimah, saturated in immorality; see Rashi to Bereishit 12:19.