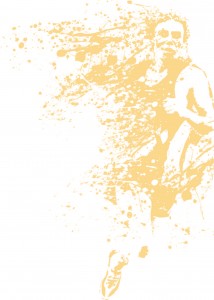 When he hit his late twenties, Ben Kramer—a former high school hockey player from Long Island, New York—was living a pretty sedentary lifestyle and was carrying around more than a couple of extra pounds. But he supported his wife, Samantha, when she registered for a half marathon, flying down with her to Miami the weekend of the race. When his wife told him, “You’re here anyway—why not just run with me?” Kramer ran—or rather walked—those 13.1 miles, completely untrained. Yet, as he hobbled across that finish line, he realized he was hooked.

Why Run?
One major reason people lace up their running shoes is to improve their health. A recent study in the Journal of the American College of Cardiology showed that people who ran regularly over a period of fifteen years—even slow running for just a few minutes a day—had a 30 percent lower risk of dying and a 45 percent lower risk of dying from a cardiovascular-related cause over a fifteen-year period compared to nonrunners. This gives runners an edge over heart disease, the leading cause of death in the United States and around the world.

Additionally, the calorie burning and muscle building of continual running helps with weight control. “As you get older, your metabolism slows down,” says four-time Team Yachad runner Jacob Schlanger, from Teaneck, New Jersey. Team Yachad raises funds for Yachad/the National Jewish Council for Disabilities, an agency of the Orthodox Union that supports Jews with disabilities and promotes their inclusion within the broad Jewish community.

“I began noticing my weight creeping up,” says Schlanger who is sixty-three. “I thought, let me be proactive. Running helps in that regard.”

Running also provides an added bonus: time to think. You can’t talk on your cell phone while running, so you are left with your own thoughts. And then there’s the exhilaration of running in the Great Outdoors, which many prefer to the monotony of the treadmill. Exercise positively impacts mental health, releasing endorphins, “feel-good chemicals,” that may fight depression, boost self-esteem and reduce stress.

“It’s just a general good feeling,” Schlanger relates. “You know you’re doing something good for yourself, for your body. I feel good that I can still do these things.”

Running for a Cause
For the past six years, Team Yachad has been turning its supporters from around the country into runners, encouraging them to compete in endurance races in the Miami, Toronto and Jerusalem marathons in order to help raise funds for the organization.

“In our sixth year, this past January, we surpassed our goal of having 200 runners,” Hagler says. The Miami marathon is just one of five marathons that Yachad participates in annually. It also participates in marathons in New York, Cleveland, Jerusalem and Toronto. Since 2010, more than 1,400 Team Yachad runners have run over 15,000 miles. 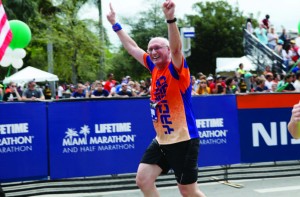 “Running a half or full marathon is something on everyone’s bucket list, but few people actually get to cross it off,” Hagler explains. “Running with Team Yachad gives people a venue in which they can run while doing something good for themselves and others—and have an incredible experience at the same time.”

For Yachad, the goal is twofold: to raise money as well as to raise awareness of the organization. Team Yachad runners who run in the Miami Marathon commit to raising a minimum of $3,000 in pledges (the amount varies depending on the particular city) to compete on behalf of Yachad—a tall order for some, but Hagler’s team works with the runners-to-be to earn the funds.

“We’ll give and share ideas about how to raise money, but ultimately each runner does what he wants to do and what works for him—knock on doors, e-mail family and friends, et cetera.

In return, Yachad takes care of all logistical aspects of the race weekend, including flight, hotel, race registration, transportation, food and everything in between.

You simply can’t put a dollar sign on the atmosphere of a Team Yachad weekend. “The experience stays with you and carries you through the whole year,” says Vicki Ross, a Chicago social worker who ran with Team Yachad.

That feeling when you cross the finish line is unlike any other. There is something about setting a goal for yourself, putting in the hard work and accomplishing that goal that is surreal. Having Team Yachad written across your chest makes it all the more meaningful.

The weekend comes to a head Motzaei Shabbat before the race at the famed “pasta party,” where runners load up on carbs to fuel their endurance the next day. “The music is blasting, everyone is excited. It really gets the momentum going and adrenaline pumping,” says Hagler.

On Your Mark, Get Set
There are two types of Team Yachad runners, according to Hagler: those who are runners already or want to become runners, and those who are doing it to support Yachad and raise money for a charity close to their hearts. “Some from the latter group,” he says, “really follow through, and it changes their lives for the better.”

Many of the half marathoners choose to run with Team Yachad in order to give back to the organization, like Bassie Taubes, fifty-three, from Teaneck, New Jersey, a nurse-turned-health-coach. “My son has autism and he has been very involved in going to Yachad Shabbatons and other events. I’m very indebted to Yachad—they are doing work no other one organization is doing.”

Schlanger, whose daughter is a Yachad member, used to be a distance runner. “I ran the New York City Marathon in the 70s and 80s several times, then stopped for a few decades. When I turned sixty, I started running again—this time solely for Yachad.” 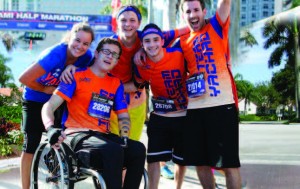 For runners, preparing for race day begins months in advance. (Ideally, three months of training is recommended, but many Team Yachad runners have done it in less time.) Coach Jasmine Graham, affectionately known as Coach Jaz, is a certified running coach with the Road Runners Club of America (RRCA) and an American Council on Exercise (ACE) trainer, who has been training Team Yachad members for the half marathon in Miami since 2009.

“A half marathon and definitely a full marathon is no joke,” says the coach. “It’s a commitment, a sacrifice of your time. People who don’t do the work—you can tell. I highly recommend training, especially for the 26.2 miles. Sometimes the half marathoners who don’t train come back the next year and say, ‘This year, I’m doing it right and training.’”

As soon as someone signs up with Team Yachad, he’ll begin receiving informative e-mails from Coach Jaz with a detailed training program tailored to his current fitness level, tips on proper running form, getting shoes and other gear, preventing injury—everything he needs to know. 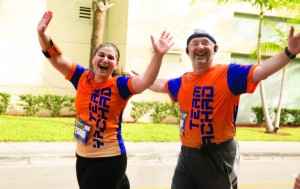 Kramer, who ran four times with Team Yachad, follows Coach’s e-mails to the letter. “Whatever it told me to do, I did. On that first day, I did 4.4 miles; it took me a little while. I just stuck to it, and I ran according to the schedule. Within two or three weeks, I was able to run three miles straight without having to walk.”

“I didn’t find it difficult to run the half marathon because I had trained,” says Taubes. “There were a lot of twenty-year-olds who were in much worse shape than I was after the marathon. When you’re twenty, you think you don’t have to train.”

Coach Jaz brings a team of coaches down to Miami for the whole weekend to lead workshops, answer last-minute questions and keep everyone on their toes for the big event. They’ll also work with anyone who hasn’t trained enough to try to get them through the half marathon safely. 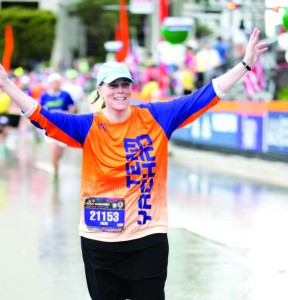 Making the Commitment
Deciding to run a marathon or even a half marathon is a commitment. Training takes away time normally spent on other important things, and runners need to be prepared for that.

Also, it’s important to remember that it’s never too late to start. “I started running in my mid-fifties,” says Team Yachad runner Dr. Nachum Katlowitz, from Brooklyn, who will be turning sixty this year.

Fitting training into a frum lifestyle may require some maneuvering. “The hardest time is around yom tov, especially when it falls in the middle of the week,” says Shoshana Stoll, a runner from New York. “You lose a lot of days. Of course, you make it up afterwards.”

Miami’s race day begins at 6 a.m., which skews davening times that morning. “The first thing many of our runners do when they finish the race is dry off and then head to a Team Yachad tent specifically designated for minyanim,” says Hagler.

Then there’s the question of “What do I wear?”—which is of special concern to women. Taubes, who sports a hat and wears a skirt with leggings underneath when running, says, “I don’t feel uncomfortable in any way. I’m used to looking different.” 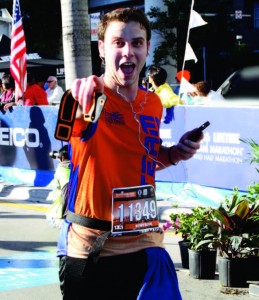 “There are other people out there with you running in skirts,” Ross says. “At first I might have been a little self-conscious, but in the end, it didn’t really affect me at all.”

Going the Distance
Running for a cause helps keep motivation high. Runners remember they are not just running for themselves, they are running to raise funds for an important charity.

And you can’t underestimate the power of the crowds. “In the middle of the marathon, there was definitely a time that I questioned myself: What am I doing?, says Stoll. “But you see all the people on the sidelines cheering—whether for runners representing Yachad or other groups. That kept me going through the marathon.”

“That feeling you have when you cross that finish line is unlike any other feeling,” says Hagler. “There is something about setting a goal for yourself, putting in the hard work and accomplishing that goal that is surreal. Having Team Yachad written across your chest makes it all the more meaningful.”

Shira Isenberg, RD, MPH, is a nutrition consultant and freelance writer in Memphis, Tennessee. Inspired by the Team Yachad runners, she ran her first race in November 2014. Team Yachad will be running in the Jerusalem Marathon in March. For more information, call (212) 613-8301 or e-mail teamyachad@ou.org.

Listen to Eli Hagler, associate director of Yachad, discuss the thrill of running the Yachad Marathon in Miami this past winter at www.ou.org/life/inspiration/savitsky_hagler.

Tips for Runners from the Runners

Thinking about registering for a race? Here are some tried-and-true tips from those who have been there:

Bassie Taubes: Download upbeat music you can listen to while you run. I have music that I use; I call it my marathon music. It’s a good motivator.

Jacob Schlanger: Set small goals and step up gradually. Don’t try to conquer the mountain on day one. It’s really a step process.

Shoshana Stoll: Team up with another runner for motivation. For my first marathon, I trained with a friend. I knew I was meeting with her, so I had to go.

Ben Kramer: Do the training. When I ran the marathon without training, I was in pain for about three weeks afterwards. The next year, with training, I felt a little sore after but I was walking around essentially pain-free.

Vicki Ross: Talk to someone who has done it to find out what it is really like. Also, look around for helpful gadgets. I bought myself a watch that keeps track of my calories, my heart rate and my pace.

Eli Hagler: Music is great for training, but during the actual race, run without it. You’ll have the chance to appreciate the beauty of the course and the surrounding area. Plus, without music distracting you, you can better soak up the experience of running together with hundreds, thousands or tens of thousands of people. There’s nothing better!