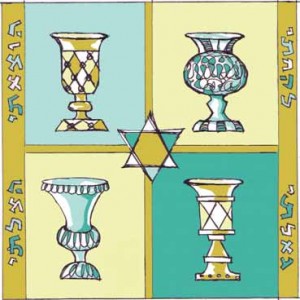 Q: With conflicting information about alcohol—it’s healthy, it’s harmful—I’m nervous about drinking the arba kosot on Seder night. Can you clarify whether it’s safe to drink and tell me how much is too much?

A:  It’s no wonder you’re confused—alcohol really is a double-edged sword. Alcohol has been used safely for thousands of years; however, it is also the third-leading cause of preventable death in the US.

There’s little risk for healthy adults to drink arba kosot at the Seder. To understand why, let’s go over the key pros and cons of alcohol consumption. A good deal of research points to cardiovascular benefits from moderate alcohol consumption. Several studies have shown that people who drink alcohol in moderation may have a 40 to 70 percent reduced risk of heart disease. One study found that those who drank moderately were less likely to suffer from heart failure. Even individuals with heart disease who drink in moderation have a lower rate of dying from a heart-related issue. Moderate alcohol consumption also reduces risk of stroke and diabetes.

Several studies have shown that people who drink alcohol in moderation may have a 40 to 70 percent reduced risk of heart disease.

Researchers attribute the protective effects of alcohol to a variety of factors. Alcohol boosts HDL cholesterol (“good cholesterol”) as much as 10 percent with two to three drinks per day. Alcohol has also been shown to reduce markers of inflammation, which play a role in the development of heart disease, and improve insulin sensitivity. Wine, in particular, contains flavonoids (color pigments) and other antioxidants like resveratrol that protect the heart.

When people start to indulge in four drinks per day—about 60 grams of alcohol—it may increase risk of disease of the heart muscle. It could also increase risk of high blood pressure. And since the liver is responsible for removing toxins like alcohol from the blood, it’s no surprise that long-term excessive alcohol use is a major cause of liver disease. Additionally, excessive alcohol use also increases risks of certain cancers.

It all boils down to this—there are real benefits and real risks to drinking alcohol. Since cardiovascular disease tends to hit at older ages, middle-aged or older individuals stand to benefit most from drinking alcohol. There’s no reason for healthy individuals in their twenties and thirties to drink for health benefits, especially considering the risk of developing alcohol dependence. Individuals with a family history of alcohol abuse, women at higher risk for breast cancer, and pregnant women or those who may become pregnant would do best to avoid alcohol completely. And regardless of research, the American Heart Association is adamant that there is still not enough evidence to recommend that non-drinkers start drinking to protect their hearts.

Despite this, don’t be nervous about drinking arba kosot at the Seder. Wine at the Seder is meant to elevate us, not make us drunk. The minimum required amount of wine for each cup is less than a typical drink—roughly 3 ounces—of which the individual is required, at minimum, to drink more than half. Even those who prefer to drink more than the minimum can rest assured that harmful effects of alcohol—aside from any immediate intolerances or the like—are caused by long-term abuse of alcohol. It is not likely that four cups of wine two nights in a row will cause liver or any other damage in healthy adults.

Calorie Counting
You won’t usually find nutrition facts on a bottle of wine, but with 7 calories per gram of alcohol, several glasses of wine can make a real dent in your calorie budget. Traditional dry table wines—red or white—range between 120 to 125 calories for a 5-ounce glass. Sweet wines contain more sugar and therefore more calories, running up to about 140 calories for 5 ounces. Light wine has less alcohol, which can save you nearly half the calories. A 5-ounce glass of light wine usually contains between 70 to 75 calories. By comparison, 5 ounces of grape juice could be 80 to 95 calories.

The Arba Kosot and the Diabetic
Alcohol can cause a temporary drop in blood sugar. Because one drinks on a mostly empty stomach for the first few hours of the Seder, those with diabetes will need to plan a little more for the arba kosot. One with diabetes should talk to his health care provider and his rabbi before the Seder to find out the minimum amount he is required/allowed to drink, minimum percent alcohol acceptable for wine at the Seder, and whether he may dilute his wine with water. In addition, he will want to double check that alcohol will not interfere with any of the medications he may be taking. Then he should select the wine carefully. People with diabetes should opt for a dry wine to minimize sugar content. If possible, they should test a sample of the wine with a blood glucose meter before Pesach to confirm that it is actually low in sugar.

Shira Isenberg is a registered dietitian and writer with a private nutrition practice in Passaic, New Jersey. She has a master’s degree in public health nutrition from Hunter College in New York. Send her food- and nutrition-related questions to ja@ou.org.