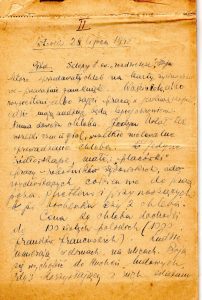 Dr. Hillel Seidman (1914-1995) was a researcher, author and Chassidic Jew who kept a diary chronicling daily life in the Warsaw Ghetto. Written between July 1942 and January 1943, the diary, miraculously rescued from Nazi hands, records the Ghetto’s last days. Dr. Seidman managed to escape the ghetto in January 1943, and ended up in Vittel, a prison camp in Vichy, France. He secured a false Paraguayan passport and survived the war, one of only twelve prisoners to survive Vittel. He died in 1995.

Loaned to the Amud Aish museum by the Seidman family, the diary provides an eyewitness account of life in the Ghetto and attests to the extraordinary spiritual heroism of those who perished. Below are excerpts from Dr. Seidman’s diary:

July 19, 1942 – Meeting of Activists and Personalities
With rumors of impending mass “resettlement” beginning again . . . a top secret meeting of activists and personalities gathered . . . the first item on the agenda was: Were the frightening rumors at all accurate? . . .The optimists argued that our strength lies in our sheer numbers. Warsaw itself is a force to be reckoned with. They would not dare destroy half a million people! Various suggestions are put forward: Maybe we should collect huge sums of money or many kilos of gold to bribe the Gestapo . . . Perhaps we should consider setting up many factories and workshops to show Jews as a productive element and thus save them from deportation. Rabbi Yosef Konigsberg . . . and Rabbi Zisha Friedman propose sending a courier to Switzerland to alert World Opinion . . . We must persuade the Pope to publicize a special appeal. We must . . . We should . . . Slowly but surely realization dawns on the gathering that all our plans are unrealistic, impossible to carry out . . .

July 21, 1942 – The Gestapo Prepares for Deportations
Crowds fight for labor cards . . . Everybody rushes back and forth seeking employment in the workshops . . . Men seek social marriage certificates to protect their wives, since there is also a rumor that those holding marriage certificates will not be deported . . . Incidentally, in the house of Rabbi Yitzchak Meir Kanal at 6 Twarda Street are also large crowds busily getting married! Bachelors who have work cards marry women who have no work, to save them from deportation. These mass marriages are conducted in great haste . . . Women still unmarried seek “husbands.” The ancient prophesy rings true: “And on that day seven women will clutch at one man saying we will eat our own bread, wear our own clothes, just allow your name to protect us” [Isaiah 4:1].

The Night of Tears
Crossing our courtyard I notice our small shtiebl. . . . About twenty men sit on upturned benches—it’s Tisha B’Av tonight! Two flickering candles at the temporary amud dimly light up the bent heads, with their eyes staring into the far distance, as that heartrending tune wells up: “Eichah . . .” the tune that was perhaps first composed at the exile from Jerusalem and has since absorbed the tears of generations . . . How true, how real those ancient lamentations read; how accurate they describe our present catastrophe. That was when it all started, when we were driven from our land and lost our sovereignty 1,872 years ago. Today is but another link in a long chain.

August 12, 1942 – Death March of Korczak’s Orphans
Today Dr. Janusz Korczak was ordered to “vacate” the orphanage. Korczak himself could really stay, since doctors are considered essential, and the Judenrat still retains enough clout to save him. But Korczak refuses to save himself alone. He cannot bear to leave his orphans and decides to accompany them on their final journey . . . All the children assemble in front of the orphanage on Sliska Street—so many children, from the almost adult to the very tiny—and though they are starved and weak they remain disciplined and well behaved . . .  All eyes follow the “doctor”; with him at their side they feel almost safe. Korczak attends to his children with a frightening intensity: he buttons up the coat of one child, straightens the cap of a second and adjusts the satchel of a third—then he goes up to another child and carefully wipes away his tears . . . The column of children begins to move, marching to their unknown destination . . . Who knows how much potential, skill, talent, and Jewish treasures are contained within these precious young souls, now condemned to death . . . At their head marches Janusz Korczak—the symbol of selfless love and charity overwhelmed by the cruel and evil enemy who knows no mercy. 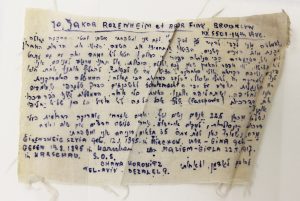 A creased piece of jacket lining that Dr. Hillel Seidman smuggled out while he was in the Vittel internment camp in Vichy, France. Dr. Seidman cut this piece from the lining of his jacket and wrote on it a desperate plea for rescue. He smuggled it out with the help of a non-Jewish woman who sent it to Rabbi Yaakov Rosenheim in New York. Written partly in Hebrew and partly in English, the note begs for passports.

August 27, 1942 – On the Death March
And so we sat—squashed, hungry, and completely cowed—all of us had surrendered to total despondency and apathy . . .  Suddenly, my elderly, white-bearded neighbor with his tallis and tefillin straightened up and began to speak: at first quietly, but soon with growing strength . . . Jews, do not worry yourselves! Do not fall prey to depression or sadness. Can’t you see we are marching towards Mashiach? Can’t you see that? If only I had a glass of mashkeh, I would drink a lechaim, here and now! Lechaim Yidden!” . . . .

Hoshana Rabbah, October 2, 1942 – Torah and Avodah at One Bench
I arrive at the Schultz factory when the assembled “workers” are davening and reciting Hoshanos. The Schultz works now “employ” the cream of Orthodoxy—Chassidic rebbes, rabbanim, talmidei chachamim, religious activists, and prominent Chassidim. At one workbench, officially repairing shoes . . . sits Rabbi Aryeh Zvi Frumer, formerly rosh yeshivah at Chachmei Lublin. He might be sitting here but his mind is miles away; his lips are constantly moving, obviously he is studying Torah by heart. Every so often, he throws a question to his neighbor opposite, Rabbi Kalonymus Kalmish Shapira of Piaseczno, author of the Chovos HaTalmidim, and they begin a whispered dialogue in Talmudic study quoting Chazal and posekim. The spirits of the Rishonim and Acharonim hover above this workbench—for these “shoemakers” are really geonim and Talmudic giants. Who worries about the German overseers or the SS? Rapidly, they forget the continual hunger, the ongoing persecution and oppression, the ever-present threat of death. They are no longer in a factory at 46 Nowolipie Street, but inside the Temple’s Hewn Chamber at a sitting of the Sanhedrin. While some succumb to their maltreatment, these gedolim rise to new spiritual heights . . .

January 14, 1943
I remember one famous Chassidic Rebbe once said why the Bais Hamikdash was built on Mount Moriah rather than Mount Sinai. A place where a Jew had been moser nefesh was more important than the site where the Torah was revealed. And where else had so many Jews fallen al kiddush Hashem than these roads of the Warsaw Ghetto? Every street is a Mount Moriah, every stone an akeidah. If, by some miracle, I survive this madness, perhaps I should bring a stone from Nalewki Street to Eretz Yisrael and place it alongside the Kosel Maaravi. When Jews come on pilgrimage to that sacred site, they could also weep over this stone for the loss of all their loved ones, for the destruction of a large segment of Klal Yisrael. They will bewail the extinction of a central powerhouse in Judaism—Polish Jewry—as they mourn the churban of the holy Temple.

[The final entry] January 18, 1943—The First Resistance
Nobody puts any trust in German documents and permits. Instead they stow away anywhere they can—in lofts, bunkers, and hiding places . . . A unit of ZOB (Zydowska Organizacja Bojowa— the Jewish Resistance Organization) lives at 7 Wolynska Street. When the Latvians and Ukrainians approach the building, a few hand grenades are thrown at them from the windows. A number of them are killed, including their SS officer. They immediately panic and run blindly in all directions. An eerie silence descends on the street. Yet all know this cannot last, the Germans won’t give up so easily. The Resistance instructs all Jews to leave the street immediately, and everybody evacuates the area. As darkness falls, a few SS arrive. They proceed down the street holding electric pocket torches, which they shine at every apartment entrance as they pass . . . There is no hope, no escape, nowhere to hide. And the merciless enemy seeks to destroy everything.

Text courtesy of the Seidman family.

4.5 2 votes
Article Rating
This article was featured in the Spring 2018 issue of Jewish Action.