Carol Lasek Bienenfeld (bottom row, first from right) and her daughter Jenna (top row, fourth from right) with their extended family at the Teach New Jersey Legislative Dinner, where Jenna and her husband Sam (fifth from right) were recognized for their dedication to the organization.

When Jenna Bienenfeld Goldstein was chosen to be an honoree at last year’s Teach NJ Legislative Dinner, she immediately shared the news with her mother, Carol Lasek Bienenfeld, who has been a leader in Teach Florida for years. “This is something you are never going to forget,” Carol told her daughter. “It will remain with you forever—because this is for your kids and your grandkids.”

This past May, Jenna and her husband, Sam Goldstein, a Yavneh Academy Board Member and Teach NJ Liaison, were recognized by Teach NJ in appreciation of their dedication as volunteers as well as their generosity as donors.

For her part, Carol is thrilled that her daughter is involved in Teach NJ and is very proud of Jenna and Sam’s commitment.

The Bienenfelds are but one example of a multi-generational family that is passionate about the work of Teach Coalition. Jenna recalls growing up in a home where charity was of paramount importance and annual family meetings to discuss the value of giving back to others were sacrosanct. As the mother of four children, she appreciates the relevance of Teach Coalition more than ever. “We believe in advocating for our community to voice our needs and fight for the safety and security of our yeshivah day schools,” she says. “Education was one of the most fundamental things we were raised with.”

Carol, who lives in Fort Lauderdale, was an early leader in the fight to expand Florida’s tax credit scholarship program. She was one of the first to join the Jewish Leadership Coalition in 2011. Headed by Dr. Allan Jacob, the Coalition was the precursor to Teach Florida, which launched in 2016. A partner at BLS Wealth Management, Carol remembers yearly missions to Tallahassee with JLC and then with Teach Florida, to lobby for school choice while her children were still in day school. “It’s all about activism to make a difference,” she says.

As the founding and ongoing Co-Chair of Teach Florida’s Annual Legislative Breakfast, Carol has helped grow the event from 300 to 600 people a year, with fifty elected officials in attendance. “It’s a golden opportunity to educate our community and elected officials about the vital role of state scholarships for our families and the tremendous impact of the state’s school security funding program.” Indeed, since Teach Florida and its school choice partners teamed up to advocate for the largest expansion in scholarships in 2020, Florida has become the nation’s leader in scholarship programs.

“Carol is more than a smart, charismatic and generous woman,” observed Mimi Jankovits, National Director of Marketing and Strategic Relations for Teach Coalition, who also served as Teach Florida’s first Executive Director. “She is a role model as a community leader and successful businesswoman. Most beautifully, she has passed her values on to her children as well as to the whole community.”

Being a second-generation member of the Teach Coalition family is a responsibility that Jenna, a resident of New Jersey, takes seriously. Inspired by her mom, Jenna has been actively spreading Teach Coalition’s messages to her peers, explaining that the state funding secured for nonpublic school students translates into significant savings, which can go a long way toward paying for other essentials. “Jewish education is of paramount importance to my husband and myself. We are both big believers in it because our parents provided us with a Jewish education, and we want that for our children and grandchildren,” she says. “When it comes to tzedakah, you give to family first. Teach Coalition, at least to us, is a charity that we feel impacts our own children and future generations.”

Multi-generational lay leadership is also evident in the Sutton family. Abe Sutton saw firsthand his father’s extraordinary dedication to Teach Coalition over the years. “My father was one of the people who helped found the organization before it was part of the OU, and I was always impressed by what they [the OU together with my father] accomplished.” 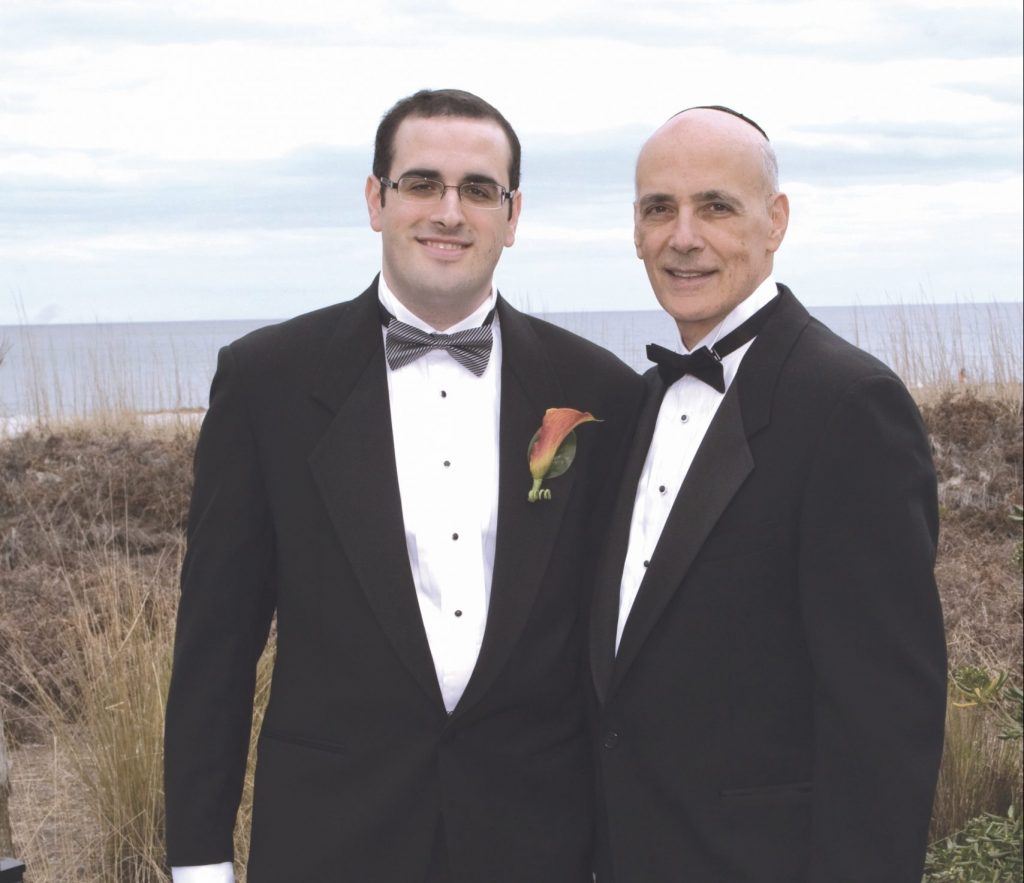 Abe and Sam Sutton. Having observed his father’s enormous dedication to Teach Coalition over the decades, today Abe is a Teach NJ Ambassador.

“Without Sam Sutton, there would be no Teach Coalition,” says Dan Mitzner, Teach Coalition COO and Director of Government Affairs. “Sam’s early engagement with elected officials in New York City became the model for how Teach Coalition built its advocacy network. Sam is a key part of our lay leadership, and we rely on his advice and expertise.”

Teach Coalition’s roots date back to 2005, when Sutton, a resident of Brooklyn and president of the Sephardic Community Federation in New York, and other leaders of the organization recognized that the financial burden of yeshivah tuition was a significant hardship for many of its members. They stepped up to create Teach NYS, a groundbreaking movement to advocate that a share of the state’s taxpayer dollars be invested in the education of its 400,000 nonpublic school students.

Teach NYS began lobbying elected officials and was successful in its aim to direct funds to the growing nonpublic school community. In 2013, Teach NYS broadened its focus by affiliating with the Orthodox Union to benefit an even larger number of yeshivah and day school students, impacting Jewish education nationally.

As President of Teach NYS from its inception, Sam has played a crucial role in its accomplishments. His tireless advocacy and hours spent cultivating relationships with elected officials were pivotal in the tremendous growth in funding for the state’s nonpublic student population. Over the years, Teach NYS has successfully lobbied for funding toward enhanced school security, kosher meals, classroom technology and UPK (Universal Pre-Kindergarten) programming. Sam is extremely proud of Teach NYS’s achievements in securing STEM funding for nonpublic school students, with an initial $5 million allocation six years ago that has grown to $55 million today.

Taking the lead from his father, Abe spends significant time educating community members and elected officials about policy goals. “We arranged two virtual missions to Trenton so that hundreds of students could meet with their legislators, as well as with scores of other meetings where we explained who we are and what we are looking for, while developing stronger relationships with the people making policy,” says Abe.

“We have also taken a page from my Dad’s playbook by focusing on getting out the vote. Some people don’t realize how important voting is,” explains Abe. “While everyone’s vote is confidential, how different communities voted is public information. Candidates are more likely to pay attention to communities with high turnout. Most people don’t understand this until you explain it to them.”

Having observed his father’s enormous dedication to Teach Coalition over the decades, Abe is today a Teach NJ Ambassador, working to build lasting, impactful relationships with key elected officials in the state. Mitzner credits Abe with having impressive leadership qualities—like his father Sam. Abe recalls politicians coming to the house for coffee, and “even for Shabbat meals,” and how his father would spend hours on the phone discussing how Teach Coalition could do even more to help families and students. Today, Abe is doing the same.

To learn more about the work of Teach Coalition, contact Katie Katz at KatzK@teachcoalition.org.