More than 800 friends and supporters of the Seymour J. Abrams Orthodox Union Jerusalem World Center attended a concert to support the Center’s programs this past Yom Yerushalayim. Featuring some of the most popular Chassidic singers including Ohad Moskowitz, Chazzan Yitzchak Meir Helfgot, Yishai Lapidot, and Yossi Green, the concert was held on the Mount Scopus campus of Hebrew University in place of the OU Israel Center’s annual dinner. Proceeds from the event went to support the Pearl and Harold Jacobs Outreach Zula Center, a program that provides a safe haven in downtown Jerusalem for youth at risk.

A special presentation was made to SodaStream, an OU-certified Israeli company, acknowledging its special support of The Zula program. 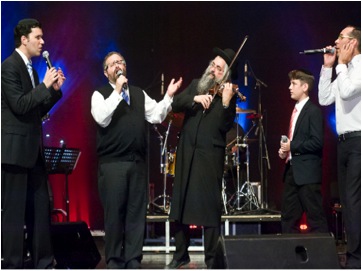 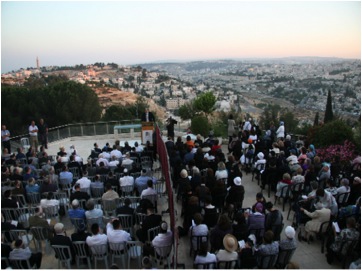 Concert Chairman Zvi Sand began the evening by leading a Tefillah Hagigit, held on the porch of Hebrew University’s Mount Scopus campus, which overlooks the Old City of Jerusalem and Har HaBayit. A crowd of 800 packed the auditorium. Photo: Goldie Einhorn