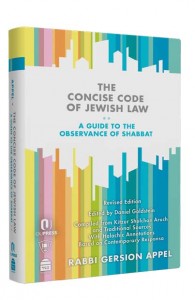 Despite the eternal nature of halachah, each generation requires its own halachic works. Some halachic works are expansive, theoretical and appeal to the intellect, while others are more practical, to the point and answer the crying need for day-to-day guidance in proper halachic observance. The Concise Code of Jewish Law is an up-to-date work of halachah lema’aseh for our generation, presented, as its title suggests, in a concise and user-friendly format. (This volume on Hilchot Shabbat is the first of a projected four-volume series covering all areas of practical halachah.) The text, which loosely follows the organization of the Kitzur Shulchan Aruch, is accompanied by notes with more detailed examples and applications, as well as a section of Hebrew sources and references at the end of the volume.

First published a generation ago by Rabbi Gersion Appel, the work has been updated by Rabbi Daniel Goldstein in style and in substance to address new technological developments and the opinions of recent posekim. Unique among halachic works in English, Concise Code incorporates not only classic sources such as the Chayei Adam, Mishnah Berurah and Aruch Hashulchan, but a wide spectrum of the greatest posekim from the recent past such as Rabbi Moshe Feinstein, Rabbi Joseph B. Soloveitchik, Rabbi Shaul Yisraeli and Rabbi Shlomo Zalman Auerbach, down to the leading posekim of our own day such as Rabbi Nachum Rabinovitch, Rabbi Hershel Schachter, Rabbi Mordechai Willig and Rabbi Eliezer Melamed.

The enthusiastic haskamot of Rabbi Ahron Soloveichik and Rabbi Dovid Lifshitz to the prior edition, and of Rabbi Hershel Schachter and Rabbi Mordechai Willig to the new edition, attest to the important place Concise Code should occupy in your library. Concise Code makes a perfect text for students, as well as for all those interested in enhancing their observance of halachah and acquiring greater knowledge about the intricacies of practical halachah in our generation. 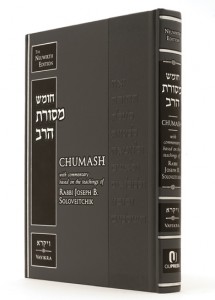 In the third volume of Chumash Mesoras Harav, Dr. Arnold Lustiger has again succeeded in creating a seamless commentary on the Chumash out of a diverse array of lectures, essays and books containing the ideas of Rabbi Joseph B. Soloveitchik, the “Rav.”

Sefer Vayikra, perhaps the most difficult of the books of the Chumash, provides a fertile ground for the Rav’s analysis. Here, the fruitful interaction between lomdus and philosophy, the Rav’s trademark, finds expression in Vayikra’s most perplexing laws, from the parallel between the rites of the metzora and the mourner to the contrast between the service of the High Priest and of the scapegoat. In addition to halachic mastery, in the Rav’s hands seemingly esoteric laws give rise to universal philosophic principles. To give just one example, the Rav explains the language of the verse regarding the punishment for one who consumes blood (Vayikra 17:10), “and I will cut him off from among his people”:

If man wants to defeat death and scoff at nihility, he must somehow elevate himself above this order of meaningless existence and come close to the order of eternity. To gain a pass to everlasting reality, he must represent God . . . This is possible only if the individual Jew includes himself in Knesses Yisrael, the community which was burdened at the dawn of history with the divine logos and ethos, God’s word and ethical system . . . Only when the individual joins this community may he lay claim to a deathless existence. Only through identification with the origin may one gain eternal life.

The Chumash Mesoras Harav: Vayikra joins the preceding volumes on Bereishit and Shemot as a classic commentary on the books of the Torah.