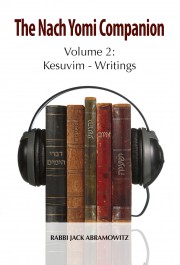 When I was young I received as a gift a book called The Children’s Bible that was a thousand-or-so page condensed version of Tanach. I found it fascinating and read the thick book– not once but twice. Its attraction was due to its simple language. It certainly lacked the thee’s and thou’s of old translations but also much of the complexities of the narrative and poetry that make navigating Tanach difficult. It was a simplified and shortened Bible that was easy to digest and even entertaining. The closest you can find to that today is The Living Torah (Rabbi Aryeh Kaplan) and The Living Nach (Rabbi Yaakov Elman), both of which contain an idiomatic translation of Tanach into contemporary English. But even these works provide a word-by-word translation so they contain— forgive me for expressing something we have all guiltily thought at some time—the less engaging parts as well.

Rabbi Jack Abramowitz’s recent books, The Nach Yomi Companion, Volume 1: Neviim—Prophets and Volume 2: Kesuvim— Writings, are chapter-by-chapter summaries of the Prophets and Writings sections of the Bible. Rabbi Abramowitz, associate director of the Pepa and Rabbi Joseph Karasick Department of Synagogue Services at the OU, has a keen sense of readers’ abilities to absorb material and attention spans. He knows when to be brief (i.e., skip) and when to give details. Aside from condensing the text, he also briefly explains the meaning of the contents, often utilizing a variety of commentaries. The key to his success, however, is not in his summarizing and explaining but rather in his understanding of what speaks to people today. His writing is filled with tasteful puns and pop-culture references, and also with lessons that are very relevant to our daily lives. What emerges is not just a summary of the Bible or a commentary on it. It is an application of Tanach to today’s world, a lesson in the eternal value of the Bible.

The books were conceived as companions to the OU’s Nach Yomi regimen, in which followers study one chapter of Bible a day. The OU web site contains short lectures by great teachers corresponding to the Nach Yomi schedule, all of which are archived for future use. But even if you have no interest in that extensive study and you simply want to learn quickly what Tanach is all about, this is still the book for you. Call it the Cliffs Notes to the Jewish Bible. It’s the short and interesting version, which will hopefully whet your appetite and draw you to intensify your study of the greatest book of all time. 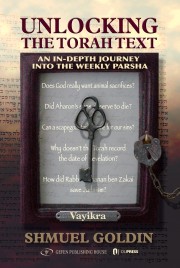 OPENING UP THE TORAH
Unlocking the Torah Text, Volumes 1-3
OU Press and Gefen

Professor Nechama Leibowitz was a ground-breaking pedagogue who revolutionized the way we teach and study Tanach. She changed not just how we look at the sacred words of the Bible but also how we understand the relationship between the classic commentators and the text. Consistently in her teaching and writing, she surveyed various views of the commentators, discussing the textual bases for their comments and occasionally adding her own thoughts to the conversation. Very often, she also placed the discussion within an ethical and theological perspective, teaching timely lessons to her audience.

There is a writer today who I think is stylistically very close to Nechama. Rabbi Shmuel Goldin has published three volumes of Unlocking the Torah Text: An In-Depth Journey Into the Weekly Parsha, Bereishit and Shemot in prior years and most recently, Vayikra. On reading Rabbi Goldin’s books, I have found that he follows Nechama’s approach fairly closely, albeit making his steps more obvious and therefore his methodology more transparent.

In each of the several essays per Torah portion, Rabbi Goldin briefly describes the context of the narrative, proceeds to a number of questions on the text, and then offers multiple approaches (sometimes as many as seven) to resolving these problems. Generally, each approach is based on at least one midrash or commentator and Rabbi Goldin shows how the interpreter(s) reacts to the text in formulating his explanation. Occasionally, Rabbi Goldin will offer his own original approach. Finally, very often he concludes an essay with a section called “Points to Ponder,” where the educator in him tries to help readers think about the contemporary relevance of the text and commentaries. This is particularly prevalent in Vayikra, where he manages to take arcane topics and subject them to a philosophical analysis that uncovers lessons that are relevant to our lives today.

Rabbi Goldin uses an exciting language that is intelligent but not obscure and focuses on telling the story of the text and commentaries. He takes readers by the hand and shows them not just the results of his study but every step of the way. I call this style “Nechama Leibowitz made accessible” because it accomplishes everything she tried to do with her published studies but in a more transparent and easy-to-use way.