This past January, seventy-seven Team Yachad runners from across North America and from as far away as Israel gathered in Miami to participate in the ING Miami Marathon and Half-Marathon. The runners aimed at raising funds for Yachad/NJCD, the Orthodox Union’s agency that provides social, educational and recreational programs for Jewish individuals with disabilities.

This was the second consecutive year Team Yachad participated in the event, and the growth in the number of runners and funds raised was most impressive. Last year, thirty participants raised $25,000; this year, the seventyseven runners brought in more than $85,000.

Runners were required to raise $3,000 in their communities. In return, they received race admission, round-trip airfare, and hotel accommodations.

“Our participation in the marathon is quickly becoming one of the annual Yachad program highlights,” says Dr. Jeffrey Lichtman, national director of Yachad/NJCD.

Marking his second marathon with Team Yachad, Adam Rosen, president of Congregation Anshei Chesed, an OUmember shul in Boynton Beach, Florida, said, “It was an absolutely amazing experience.” His wife, Tzippi, director of Yachad/South Florida, cheered him on from the sidelines. “You see incredible camaraderie, excitement and a tremendous sense of accomplishment afterward,” says Rosen.

“As I crossed the finish line, I had tears in my eyes and waved to all of the Yachad supporters—an unmatched experience,” says Elan Baskir of Boston, who finished first among the Team Yachad members (he came in 870th out of more than 15,000 half-marathoners). “Everyone should run a marathon,” he says.

Dr. Lichtman concurs. “I look forward to running again next year with at least 177 other runners; all running for themselves, for Team Yachad, and on behalf of all individuals with disabilities.” 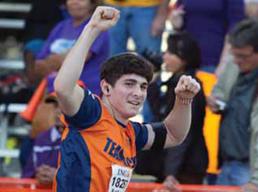 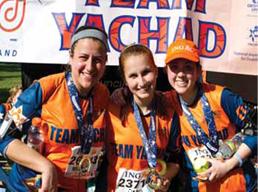 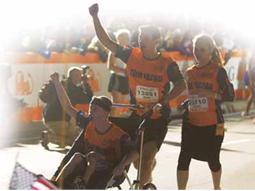 David Beiss, a high school student from West Hempstead,
New York, participated in the marathon with the help
of Avri Szafranski from Teaneck, New Jersey, while
Melanie Miller from Hollywood, Florida, ran alongside.