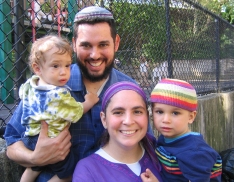 On a recent Friday afternoon, Rabbi Uri Topolosky, the thirty-something-year-old spiritual leader of Congregation Beth Israel in Metairie, a suburb of New Orleans, walked the few blocks from his house to the rear entrance of a one-story building across from the canal along West Esplanade Avenue. Crossing the parking lot, he passed the blue-and-white sign outside the door identifying the congregation.

Rabbi Uri, as he is commonly known, designed the sign, whose logo features the head of a dove with an olive branch in its beak.

Inside the sanctuary he recruited early-arriving congregants to arrange plastic folding chairs into a series of rows on either side of the impromptu mechitzah, a jerry-rigged contraption of a white curtain held up by broom handles stuck into flagpole stands.

Rabbi Uri made the mechitzah.

After Minchah, led by a middle-aged member of the congregation, Rabbi Uri stepped up to the Torah platform and led a few dozen men and women in a spirited Kabbalat Shabbat, Shlomo Carlebach style.

Rabbi Uri brought the niggunim from the Hebrew Institute of Riverdale, a synagogue in the Bronx, New York, where he served as associate rabbi for two years. The niggunim have helped change the tenor of the once-staid New Orleans synagogue.

For any young rabbinical couple, the cultural shift from a large, intensely Jewish area like Riverdale to a smaller, more-isolated Jewish community is intense. But for Rabbi Uri and his wife, Dahlia, New Orleans, where they moved two and a half years ago, was a more abrupt change.

Four years after Katrina—the Category 5 hurricane that flooded the area, took nearly 2,000 lives and threatened to end New Orleans’ reign as one of America’s signature cities—the New Orleans Jewish community, like the city itself, is on the rebound. “The Jewish community is very much back on its feet and is extremely forward thinking about its future,” says Rabbi Uri. “[We are] learning new ways to operate, including greater collaboration and consolidation.”

Beth Israel, the only local synagogue that was ruined beyond use in the Katrina floods, now meets in a rented space. Rabbi Uri is hoping to sell the shul’s original building, a few miles away in the Lakeview neighborhood; the congregation currently holds services in the “West Esplanade Jewish corridor” and is hoping to break ground for a new building in the spring.

Its numbers down, its leadership base weakened, its organizations forced to merge or share space, New Orleans Jewry is in the midst of a community-wide effort to rebuild itself.

Four years after Katrina—the Category 5 hurricane that flooded the area, took nearly 2,000 lives and threatened to end New Orleans’ reign as one of America’s signature cities—the New Orleans’ Jewish community, like the city itself, is on the rebound.

And the Topoloskys, transplanted Yankees, are a leading part of that effort. Rabbi Uri and Dahlia, a psychologist with a part-time private practice, are the epitome of a kol bo couple, taking on duties outside the normal purview of a rabbi and rebbetzin. Their home—and during Sukkot, their sukkah—is open to members of the synagogue, the wider Jewish community and often the general community as well.

“You can’t come here and be an outsider,” Rabbi Uri says. “One of my goals was to present myself as a community rabbi and be a part of the community initiatives.”

The couple, who share a love of music and Jewish outreach, always knew they would end up in a place like New Orleans. “We kept saying
we wanted to leave New York,” Dahlia says.

“Either we make aliyah, or we leave New York and make a difference someplace else,” they had decided. “We were looking for a rebuilding opportunity, a project,” says Dahlia.

Then New Orleans beckoned. Like all of the city’s Jewish organizations, Beth Israel lost many of its members after Katrina—about 40 percent, Rabbi Uri says. The former spiritual leader of the congregation left with his family because of the hurricane, and, like many New Orleans residents, Jews and Gentiles alike, did not return.

The Topoloskys visited the community and were sold on the city’s future.

Like most of the people who stayed in New Orleans after “The Storm” or decided to move there afterwards, Rabbi Uri and Dahlia are New Orleanians by choice. It’s a group whose numbers are slowly increasing.

With the help of the Newcomers Incentive Program sponsored by the Jewish Federation of Greater New Orleans, the Jewish population in New Orleans has reached around 80 percent of its pre-Katrina level of 10,000. Rabbi Uri has developed a separate program at Beth Israel to attract young Modern Orthodox couples, highlighted by his high-energy personality, out-of-town pitches to Orthodox audiences and ads in Jewish newspapers that ask “Do you have a pioneering spirit?”

Thanks to his efforts, Beth Israel membership has grown beyond its pre-storm numbers, the rabbi says, with more than one hundred members and fifty associate members. Still, he’d like to attract more new families over the coming year or two, especially those who want to make an impact on the community. Those who move to New Orleans now “really have the opportunity to shape what the Jewish community will look like,” Rabbi Uri says.

The Topoloskys, among a handful of Orthodox leaders in one of the oldest Jewish communities in the United States, are part of two trends—rabbis (and their families) moving to congregations away from major Jewish population centers, and idealistic young Jews flocking to New Orleans by the thousands to help rebuild a nearly destroyed city.

“One of the unique things about coming to a place like New Orleans,” Rabbi Uri said in an interview with the belief.net web site, “is that it’s not just about building up your shul, your synagogue, your community. It’s about helping to rebuild an entire city.”

Which means that Rabbi Uri and Dahlia quickly established themselves as recognizable presences in New Orleans’ wider community, introducing themselves at cafes and parlor meetings, lectures and challah-baking workshops. “These are things [a rabbi doesn’t] ordinarily have the opportunity to do,” Rabbi Uri says.

And usually rabbis don’t design their shul mechitzahs or upgrade the shul’s web site, both of which Rabbi Uri did. “I’m detail oriented,” he says. “I wanted to be an architect.”

New Orleans, the Topoloskys stress, is “not the midbar [desert].” Beth Israel draws a minyan every Shabbat and yom tov. There are kosher cafes and two kosher restaurants. Besides Beth Israel, there is a small Sephardic congregation and two Chabad centers. There is a mikvah and a new eruv, and Rabbi Uri intends to build a second mikvah in the suburbs. Major New Orleans supermarkets carry impressive lines of kosher goods. There’s a community day school, a Chabad elementary school and standard Jewish groups like Hadassah.

“Anyone who comes here has to be impressed by the full array of Jewish life,” Rabbi Uri says.

What do they miss from the Big Apple? Friends and family, Rabbi Uri says, “but we don’t miss the congestion. Life is slower, but certainly not duller, in this cultural hub of the South,” he adds. “We are happy to be away from the tense politics that entangle large Jewish communities. . . . Smaller communities have smaller politics. We need each other more, so there is less denominational tension and a greater cooperative spirit.”

In a room dominated by a large tapestry on the wall, Rabbi Uri leads services that feature more English, more explanations and more questions and answers than the standard davening. Many of the worshipers are from non-Orthodox backgrounds, among the hundreds and hundreds of young Jews who have come to New Orleans to live or do volunteer work.

“People are checking us out,” the rabbi says.

He’s not trying to build Riverdale on the Mississippi. Much of the outreach that he and Dahlia do is through informal education and discussions held in nursing homes and restaurants.

This, Rabbi Uri says, is common to rabbinical families serving in small cities. “We are faced with a completely different set of challenges than the ones I see our colleagues in the larger cities facing. . . . At alumni conferences, many of us from out-of-town communities naturally migrate to teach each other. We have lots of similar experiences to share and dilemmas to discuss.”

The Topoloskys say they intend to stay in their small community. In fact, Rabbi Uri recently signed an extension of his original two-year contract. “Rebuilding New Orleans is a long, emotional process,” he says. “We didn’t come here pretending we could fashion a new community overnight. We feel we’re exactly where we’re supposed to be.”