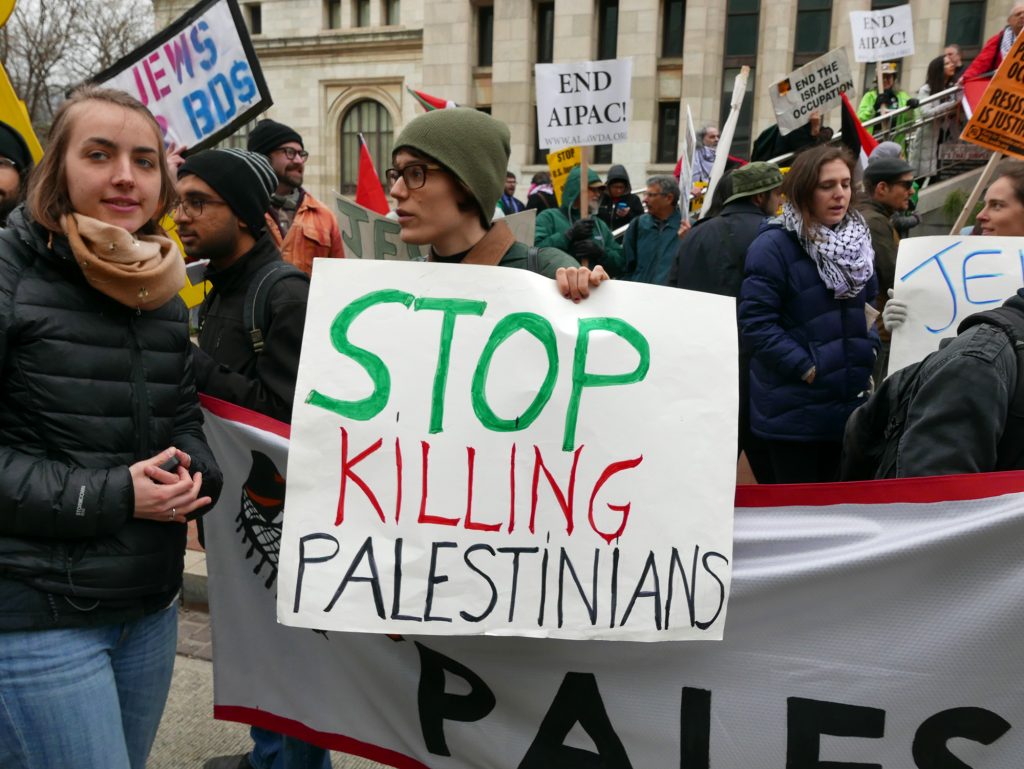 A rally in protest of the AIPAC Convention 2017. Courtesy of Susan Melkisethian/Flickr 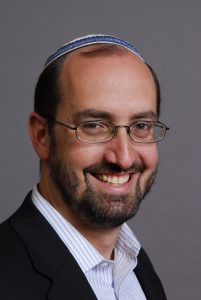 Jewish Action recently spoke with National Director of the Orthodox Union’s Jewish Learning Initiative on Campus (OU-JLIC) Rabbi Ilan Haber about the rise of anti-Semitism and anti-Zionism on college campuses.

Jewish Action: Is the perception that anti-Semitism/anti-Zionism is growing on the American college campus accurate?

Rabbi Ilan Haber: Anti-Semitism is certainly growing in American society in general. The campus is, in some ways, a microcosm of what’s going on in the larger society. On campus there is an added aspect relating specifically to anti-Zionism. The campus is often a bastion of progressive elements and intelligentsia. Plenty of activists cut their teeth in the campus environment.

There are two aspects: a passive anti-Zionism and an active one.

Let me start with the former. Anti-Israel sentiment—with the perception of Israel as an apartheid state—is becoming less marginal and more mainstream, especially among progressive elements, both in the academic environment as well as among students. I think your average students are passively influenced by what they are exposed to among their progressive friends, but it’s not a major issue in their lives. They may have the same reaction to Israel as someone might have when mentioning China or Russia, i.e., passive negative feelings that don’t play any key role in their lives or actions. This is what I call “passive anti-Zionism.”

The white supremacist movement tends to be more anti-Semitic in nature, while the left tends to stress anti-Israel activity.

However, at play among campus activists is a phenomenon known as intersectionality. One of the key practical aspects of intersectionality is that activists who are primarily motivated by different causes see common threads of social justice in their causes and thereby create alliances and act as a coalition. For instance, activists for LGBTQ rights or for “Black Lives Matter” or for universal health care—issues which have nothing specifically to do with Israel—are becoming pro-Palestinian. A student who’s fighting for LGBTQ rights is primarily interested in fighting for that cause; but since a number of these groups have created alliances with Palestinian groups, the student’s exposure to information about Israel will be colored to some extent by those alliances.

If students view themselves as progressive supporters of social justice, they are more than likely to swallow the entirety of the social justice platform, which increasingly includes an anti-Israel position. It will become part of their breathing, their DNA, not necessarily because they care about Middle Eastern politics but because they hear about Israel’s “occupation” and its engaging in “genocide.” Truthfully, genocide is a very specific term and is a major exaggeration, but pro-Palestinian activists use these terminologies and often accept them unthinkingly.

JA: I believe that Deborah Lipstadt, professor of Holocaust studies at Emory University, once said, “There are BDS supporters on campus who can’t find Israel on a map.”

RH: This is precisely my point. Many college students don’t care enough about the Israel-Palestinian issue to bother becoming informed or to question their own assumptions or biases. They are part of an echo chamber where the same words used to describe Israel are used to describe issues that they do care about. Because they align themselves with others who are anti-Israel, they end up internalizing those anti-Israel messages irrespective of whether they really care about the Israel-Palestinian issue or not. It’s also become increasingly difficult for Jewish students on campus to be both progressive and pro-Israel because it separates them from their peers who are not inclined that way.

JA: We’ve discussed anti-Zionism on the left. What about what’s happening on the right?

RH: There’s a perception that those on the right, like card-carrying Republicans, are generally pro-Israel. This was rooted in the strength of the evangelical movement. But today we see there are also people on the right who are anti-Semitic and buy into all of the anti-Semitic stereotypes; some of them feel that Jews are symbols of progressive liberal ideology working to undermine the values in American society.

On the right, there’s also a resurgence of white supremacists, due to the rise of the alt-right, which manifests as anti-Semitic and anti-Israel. The white supremacist movement tends to be more anti-Semitic in nature, while the left tends to stress anti-Israel activity. On the campus, one generally finds less open anti-Semitism coming from the right, because people from that milieu often don’t have natural homes in a university setting. But that does not mean that right-wing anti-Semitism doesn’t exist on campus.

JA: Do most Jewish students feel safe on the college campus? What about active anti-Semitism, which you mentioned earlier?

RH: I don’t think anti-Semitism/anti-Zionism affects the average Jewish student’s day-to-day life on campus. So parents don’t need to be overly concerned about anti-Semitism on campus. However, from the standpoint of our community and society, we have every right to be troubled by trends within the general society and within the campus. What do these trends mean for Israel’s support in this country and for our general feeling of safety as Jews in this country? These are concerns that are definitely worth worrying about, and the university is one extension of that. It doesn’t behoove us to play down concerns about anti-Semitism since one need only read the newspaper to see that it is growing.

While I believe most Jewish students feel safe within the university setting, when an anti-Semitic incident does happen, it is, of course, deeply disturbing. Such an incident—such as a swastika painted on a door in a dorm, for example—could be labeled active anti-Semitism. But I don’t think that’s commonplace. 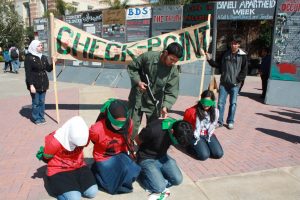 Pro-Palestinian students set up a mock Israeli checkpoint during “Israel Apartheid Week” on the UCLA campus in 2018. Courtesy of AMCHA Initiative

On quite a few campuses, the student governments have voted in support of BDS, due to some very vocal anti-Israel student groups who call for their universities to divest from Israel. (To my knowledge, the consequences of these votes are largely symbolic and have been ignored by the administrations of most universities.)

There are campuses that are known for being actively anti-Israel. It only takes one very proactive professor and a few very dedicated students to create an issue on a campus.

Unfortunately, anti-Israel activism on campus not only includes Palestinian activists and their allies, it also includes some Jews. There are Jewish students who are at the forefront of anti-Israel activity because they don’t want their identity being tied up with Israel; they see their identity as being separate from Israel. Some of these Jews view their morality as an expression of their Judaism, and if they are convinced that Israel is an immoral state engaging in immoral activities, they are going to feel it’s a Jewish requirement for them to be anti-Israel. We see this very clearly in the IfNotNow movement which is becoming more active.

The campus is, in some ways, a microcosm of what’s going on in the larger society.

At the same time, there are proactive pro-Israel activists on campus. These Jewish students get a lot of support from the broader Jewish community including organizations such as StandWithUs, AIPAC, CAMERA, and dozens of others who support them in one way or another. There are coalitions and other groups working together to combat anti-Israel activity on campus and combat the BDS proposals that go before student governments. Many Jewish students, especially those who are Orthodox, tend to be active in fighting against BDS and in supporting Israel on campus. In fact, if there’s any silver lining to this, I think that for a certain segment of students, the anti-Israel sentiment on campus can strengthen their Jewish pride and identification with Israel.

JA: If an unaffiliated Jewish student ends up taking a class inadvertently with a professor who is clearly anti-Israel, do you think that could help strengthen the student’s identity?

RH: It can, or the student can feel silenced. It depends. Most students want to fit in and not rock the boat. A professor has a lot of control and power in the classroom; is it really worth your while to call attention to yourself to combat him or challenge certain things he is saying that might not be true about Israel? Students need to make that decision, and it’s not an easy one.

JA: What role does OU-JLIC serve with regard to anti-Semitism/anti-Zionism on campus?

RH: We are an unabashedly pro-Israel organization, and Israel is one of the critical aspects of our religious values. However, we have a different focus than other pro-Israel organizations that are active on campus. Most of those organizations are primarily issue-focused; they see the students as a means for advancing those issues or perspectives, such as advocating for Israel politically, or showing a more human and nuanced side of Israel. OU-JLIC is perhaps the only pro-Israel organization that is student-focused, meaning we support the students as they engage in pro-Israel activities. The issues and perspectives are secondary to the morale, identity and well-being of the students. We often play a leadership role in combating anti-Semitism and anti-Zionism by organizing events or speaking at rallies, but we do so primarily to support and provide chizuk to the students. It also means that if a student is feeling bullied or nervous or unsafe because of anti-Israel activity on campus, we’re there to help him process his feelings and feel supported.

If students view themselves as progressive supporters of social justice, they are more than likely to swallow the entirety of the social justice platform, which increasingly includes an anti-Israel position.

Furthermore, for us, Israel is not just a secular concept, it’s a religious concept. Our educators are often the primary ones on campus viewing Israel from a religious and educational lens. On Tu B’Shevat, for example, our Torah educators run a Tu B’Shevat Seder that celebrates Israel, but also connects to Jewish learning and Torah perspectives on the produce of Israel and the environment. Similarly, on Yom Ha’atzmaut, we organize chagigot and minyanim where Hallel is recited. For us Yom Ha’atzmaut is not just about BBQs and camels on the Quad. OU-JLIC adds a valuable dimension by infusing religious content, personal meaning and a historical perspective to students’ contemporary Israel experiences on campus.

Finally, many of our Torah educators on campus have grown up or spent significant time in Israel. A number of them have served in the IDF, some even as officers (including four of our most recent hires). This gives our educators a deep and nuanced understanding and appreciation of Israel that they can convey to the students.