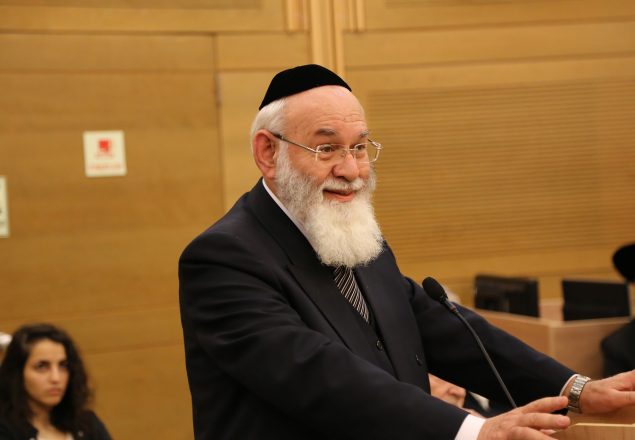 All images courtesy of Benny Gur

Around seventy years ago, Rabbi Meir Bar-Ilan, the son of the Netziv of Volozhin and a Talmudic scholar in his own right, and Rabbi Shlomo Yosef Zevin, the universally-acknowledged Torah giant, embarked upon a remarkable undertaking: the creation of the Talmudic Encyclopedia. The Encyclopedia—the only such work of its kind—provides extraordinarily precise and comprehensive summaries of thousands of Talmudic topics. To date, thirty-eight volumes have been published, containing more than 1,450 detailed entries—and more than one million copies of the Encyclopedia have been sold around the world.

In honor of the Talmudic Encyclopedia’s recent seventieth anniversary, Jewish Action Editor Nechama Carmel spoke with Rabbi Avraham Steinberg, MD, CEO, the Talmudic Encyclopedia. A senior pediatric neurologist, director of the Medical Ethics Unit at Shaare Zedek Medical Center and a world-recognized expert in the cutting-edge field of medical ethics, Rabbi Steinberg is also the author of the highly-acclaimed groundbreaking seven-volume work Encyclopedia Hilchatit Refuit (Encyclopedia of Jewish Medical Ethics), for which he received the Israel Prize. Rabbi Steinberg is an adviser to the Chief Rabbinate of Israel and the Knesset, and has been consulted on medical ethics by prominent rabbanim including Rabbi Shlomo Zalman Auerbach, zt”l, Rabbi Yosef Shalom Elyashiv, zt”l and Rabbi Eliezer Yehuda Waldenberg, zt”l.

Jewish Action: Can you describe the Talmudic Encyclopedia to those who are not familiar it?
Rabbi Avraham Steinberg: I don’t really like the term “encyclopedia.” Firstly, it is alienating for certain segments of the Chareidi world. I think more of the Chareidi world would use the work if it had a different name. Secondly, the Talmudic Encyclopedia doesn’t resemble any other encyclopedia. It’s not like the Britannica; it’s not like Wikipedia. Even though it is a collective work, you will not find bylines for any of the entries. Additionally, and most importantly, whereas an encyclopedia provides four or five summary-type references for each entry, because you are dealing with halachic concepts in the Talmudic Encyclopedia, and you need to clearly understand every word, there are references to each sentence, and often to individual words in the sentence. Some entries have between 1,500 and 2,000 references. That is how wide-ranging and comprehensive this work is.

JA: Can you explain the uniqueness of this work?
RS: Today one can easily locate references on online databases. But this work is monumental because it puts all of the references at your fingertips, in one place, and provides you with a clear and comprehensive understanding of the particular concept. In my opinion, this is the most important halachic-Talmudic work of this generation.

Let’s assume you are researching a topic, and you find 1,500 references mentioning the concept. It will take you days and weeks to thoroughly review and understand all of the references, and decide which ones are relevant and which are tangential. The Talmudic Encyclopedia does all of that work for you. We trace a Talmudic concept from the Mishnah and Gemara to midrashim and Chazal to the relevant Geonim, Rishonim and Acharonim—all the way to contemporary sources, when necessary.

It’s a very meticulous work. We strive to define terms and concepts in the most accurate way possible. But the brevity of our work is what truly makes it unique. Our writers may have to condense a six- or seven-page teshuvah by the Rashba into one sentence. In order to summarize the Rashba so succinctly, one has to understand it really well.

JA: Who uses this work?
RS: The Talmudic Encyclopedia is used by scholars and laypeople across the religious spectrum—Ashkenazi, Sephardi, Chassidic, Litvish, Religious Zionist, everyone. Prominent rabbanim including Rav Moshe Feinstein, Rav Shlomo Zalman Auerbach, Rav Ovadia Yosef, Rav Avraham Shapira, Rav Yehezkel Abramsky and the Lubavitcher Rebbe have praised the Talmudic Encyclopedia. Roshei yeshivah tell us that they use it before they give a shiur; if there’s an entry elucidating the concept they are studying, they review it just to clarify the concept in their minds. 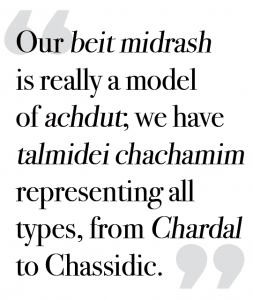 But it’s not only the yeshivah world or talmidei chachamim who have an appreciation for this work. Elyakim Rubinstein, a judge on the Israeli Supreme Court, told me that he found nearly 250 rulings in all of the Israeli courts referencing the Talmudic Encyclopedia, and nearly 150 in the Supreme Court.

JA: How did you get involved with this project?
RS: Around ten years ago, I was asked to oversee the publishing of the Talmudic Encyclopedia, which had been directed by Rav Yehoshua Hutner, z”tl, since its inception. Once I came on board, we introduced a lot of changes and essentially revolutionized the entire system. Just to give a brief illustration: ten years ago, many of the writers still used typewriters! Today all of our writers are computer literate. We also restructured our team of writers, so that writers now work in groups headed by exceptionally experienced editors. These upgrades had an enormous impact in speeding up the pace.

Speeding up the process is vital, as we are committed to completing the entire project by 2024.

Three years ago, Mr. Dov Friedberg, a well-known philanthropist from Toronto, approached us and asked how could help. At the time, we faced significant financial challenges and even thought we would have to abandon the entire enterprise. But HaKadosh Baruch Hu has His ways.

Mr. Friedberg made a considerable donation with the understanding that we would complete the entire encyclopedia within a decade. Basically, we have ten years to complete the job from lamed until taf, whereas from aleph to lamed took more than seventy years! It seemed like an impossible task, but we took the chance because without his help, we would have had to abandon the entire project.

With Mr. Friedberg’s guidance, we established The Dov and Nancy Friedberg Beit Midrash to recruit and train new writers and researchers. Each quarter of every year, our progress is assessed, and so far, in the three years we’ve been at it, we’ve been able to adhere to our schedule. We have another thirty volumes to publish (there will be a total of seventy volumes when we are done). We’ve been publishing one to three volumes a year. In the coming years we hope to publish four volumes annually. Of course, one of our biggest challenges remains financial.

The editorial staff of the Talmudic Encyclopedia.

JA: Tell us about the team working on the Encyclopedia.
RS: Rav Zevin, the founding editor, was a genius. He came up with a list (way before there were databases!) of all 2,500 entries that were to be in the Talmudic Encyclopedia, from aleph to taf. This is almost the same list we follow today.

We now have a team of thirty writers, some in their twenties and some in their sixties, all of whom are exceptionally learned in Shas. If you don’t know the entire Shas, you can’t work on this project. Additionally, each team member needs to know how to write, which presents a significant challenge, since most yeshivah-leit today are not trained to know how to write.

The Encyclopedia is entirely in Hebrew. Every Aramaic term is translated into Hebrew—a refined Hebrew, not poetic, not Talmudic, but somewhere in between. Additionally, it is written in a very distinct style; we train our writers to write in this style. I’m proud to say that our beit midrash is really a model of achdut; we have talmidei chachamim representing all types, from Chardal to Chassidic. We really have the crème de la crème.

JA: Can you explain the process of writing this tremendous work?
RS: The process is rigorous. We have four teams of writers, each of which is headed by a senior editor. Our senior editors are very experienced—some have been with us for more than thirty years. Each team is comprised of four younger writers whose job is to research and write entries. In addition to a senior editor, each team includes a reviewer who carefully looks over every word to make sure there are no errors. The senior editor of each group reviews all of the comments and suggestions of the reviewer and makes the final edits. Each entry is then meticulously reviewed by the head of the editorial board, Rav Meir Shmuelevitz, the son of Rav Chaim Shmuelevitz, z”tl, of Mir.

Once the entry is approved by Rav Meir, a linguistic editor reviews it. The linguistic editor is a knowledgeable individual, but he is not necessarily a talmid chacham of the caliber of the writers. This is deliberate because his role is to represent the general public. He needs to determine if the entry is clear enough for the average person to understand. 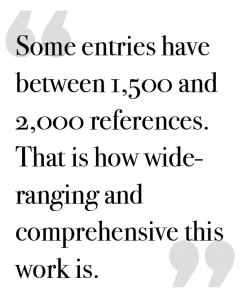 JA: How long does it take to produce one entry?
RS: It depends. For instance, the entry “migo,” which is a huge topic in the Gemara, could take weeks to research. Migo (literally “out of” or “since”) refers to an argument for a defendant that he ought to be believed regarding a certain claim because he could have made a different claim which would have definitely been believed. It sounds like a simple concept but it entails over forty pages in the Encyclopedia with about 2,000 references.

JA: Can you explain the structure of an entry?
RS: Let’s look at the first entry in the latest volume—“me’abed atzmo ladaat,” the Gemara term for one who commits suicide. This entry covers various topics and subtopics. First we need to understand how suicide is defined halachically, when is one regarded as having committed suicide and what the parameters are. For instance, as a general rule, one is not allowed to bury someone who committed suicide in a Jewish cemetery. Nowadays almost no death is regarded as a suicide from a halachic standpoint. Why so? There are a lot of conditions that must be fulfilled in order for a death to be considered suicide halachically. Did the individual say he was going to commit suicide? Did he leave a letter? Perhaps he repented at the last minute and he didn’t mean to kill himself, et cetera. This entry clarifies all the conditions in a very clear way, including instances when one is allowed to commit suicide. (Shaul HaMelech, for example, committed suicide when he fell on his sword.)

JA: Will the Talmudic Encyclopedia be available online?
RS: Currently, all of the volumes can be found in the Bar Ilan Responsa Project database as well as in the Otzar Hahochma database. Three years ago, we launched a new project called the Talmudic Micropedia, which condenses all of the Talmudic Encyclopedia entries and presents the material to the general public in a clear and easy-to-read style. Talmudic Micropedia is geared for the layman, and therefore omits many of the references, as well as dense or difficult subject matter. So far, seven volumes have been published. Eventually, we hope to translate the Micropedia into different languages so it will be accessible to everyone in print and online. We also foresee having a web site that will make all of our work available, including a Wikipedia-style site where readers can make suggestions for changes. 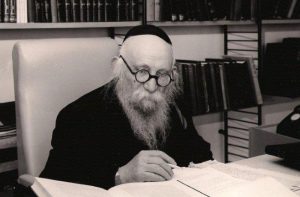 Rav Shlomo Yosef Zevin: Talmudic Encyclopedia Architect and Visionary ~ 1890-1978
Born in Kazimirov (near Minsk) in 1890, Rav Shlomo Yosef Zevin was regarded as one of the greatest scholars of his generation. After serving as rav of his hometown, Rabbi Zevin was the spiritual leader for communities throughout Russia before making aliyah in 1934. An unusually gifted writer, Rav Zevin, the architect and editor-in-chief of the Talmudic Encyclopedia, had an extraordinary ability to transform complex matter into lucid language that was easily understood. Rav Zevin, who was close to the Lubavitcher Rebbe, held Religious Zionist views. In 1942, he began working on the Talmudic Encyclopedia together with Rabbi Meir Bar-Ilan, and established the distinct structure of each entry; he served in this position until his death. Until today, writers of the Encyclopedia try to adhere to his brilliantly concise but lucid writing style. He received the Israel Prize for Rabbinical Literature in 1959.