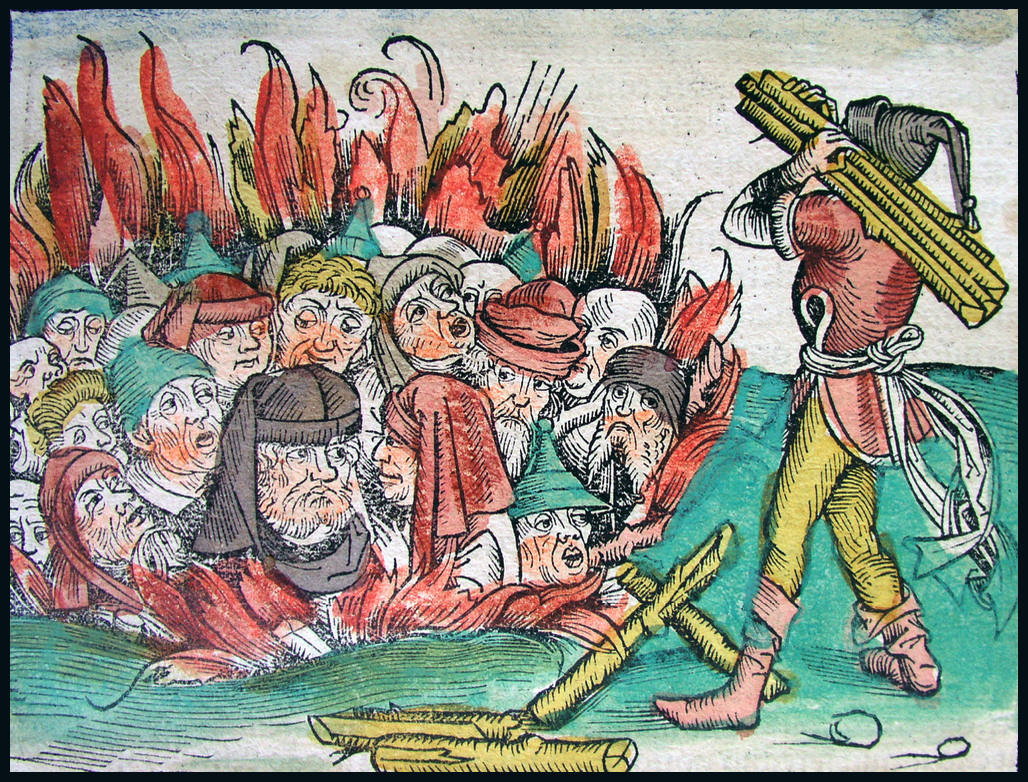 A woodcut from the Nuremberg Chronicle (1493) depicting Jews being burned alive for alleged host desecration in Deggendorf, Bavaria, in 1338, and in Sternberg, Mecklenburg, 1492. Courtesy of Wikimedia Commons

In the eleventh, twelfth and thirteenth centuries, Christian Crusaders set out on a bloody mission to conquer the Holy Land from Muslim infidels. En route, hordes of Crusaders decided to punish infidels closer to home: the Jews. Avenging the crucifixion, the Crusaders murdered and pillaged, destroying some of the most ancient Jewish communities in the Rhineland that also served as the heart of Torah scholarship for the Ashkenazic communities of France and Germany. The period of the Crusades lasted for 200 years, with eight Crusades in total, although not all of these affected the Jews.

Jewish Action writer Sholom Licht spoke with Rabbi Dr. Ephraim Kanarfogel about the Jewish response to the Crusades and how the resilience and spiritual fortitude of those communities can serve as lessons for us today. A foremost expert in the fields of medieval Jewish history and rabbinic literature, Dr. Kanarfogel is the E. Billi Ivry University Professor of Jewish History, Literature and Law at Yeshiva University’s Bernard Revel Graduate School of Jewish Studies and Stern College for Women.

Sholom Licht: Which places were most affected by the Crusades, and what was the time span? 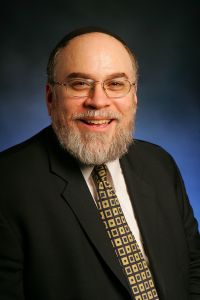 Rabbi Dr. Kanarfogel: The Crusades were most devastating to the Jewish communities in Europe. The Jewish communities in Eretz Yisrael during this period were not that large, and many of the Crusaders never even reached Israel. Of course, any kind of destruction affecting Eretz Yisrael is terrible, but in terms of loss of Jewish life, European Jewry suffered the bulk of the impact.

From the standpoint of Jewish history, the First Crusade in 1096, which is described in the kinot we recite on Tishah B’Av, was the most destructive. Uncontrolled mobs, spurred on by the local clergy, took out their venom on the Jews in the German Rhineland communities of Speyer, Worms and Mainz. According to one text, the community of Mainz is said to have sustained “eleven hundred akeidot [sacrifices].” The loss of life in Speyer was significantly less than in Mainz and Worms. Exactly how many Jews were slain in total is not easy to estimate. Some suggest 5,000; others say the number was higher than that.

During the Second Crusade, which struck Northern France in 1147, and the ensuing Third Crusade in 1189-90, which greatly affected the Jews of England (it was linked to the coronation of King Richard the Lionheart), the loss of life was not insignificant but was not as extensive as during the First Crusade.

Around the time of the Third Crusade, another terrible tragedy occurred in northern France: the so-called Blois Incident of 1171. A false ritual murder charge was made against the Jews, and despite the fact that there was no evidence of any crime—no Christian child was missing and no body was found—Jews were burned at the stake. (There are accounts that they sang Aleinu leshabei’ach as they were being burned.) To commemorate the incident at Blois, Rabbeinu Tam declared Chof Sivan to be a fast day.

SL: How did the Jews deal with the suffering at the time, and were they able to rebuild when the Crusades were over?
RK: Unfortunately, there are no diaries (and obviously no blogs or newspaper accounts) of the Crusades. The Ba’alei HaTosafot, as a group, did not write much about how they learned, or about the events that affected them; they simply learned. In the writings of Ra’avan, Rabbi Eliezer ben Natan of Mainz, who survived the First Crusade as a six-year-old boy and went on to serve as the rosh yeshivah in Mainz, you can notice references here and there to the Crusades but not much more. He makes mention of “the gezeirah—the decree,” referring to the First Crusade. The Ra’avan also wrote kinot commemorating the First Crusade and seems to have been the author of one of the Crusade Chronicles. Since there is a paucity of precise historical accounts from that period, the few existing Jewish and Christian chronicles of the Crusades are considered to be goldmines of information.

A most significant take-away from the Crusade period is the quick return to productive Torah learning. Despite the cyclical nature of the ongoing tsuris (hardships), the Jewish community worked around it and had a relatively quick recovery.

Quite remarkably, during the period in which the first few Crusades took place, while the Jewish communities in Northern France and Germany were mourning their losses and composing kinot, much of the vast literature of the Ba’alei HaTosafot was being created. Mainz and Worms, “the ground zero” of the First Crusade, recovered relatively quickly and became centers of Torah learning once again.

Following the First Crusade, through the late twelfth century and into the thirteenth century, there was a spate of persecutions in which the Jewish communities were economically devastated and Jews were injured or killed. Yet not only did the survivors manage to forge on, but they continued to grow in Torah learning.

A most significant take-away from the Crusade period is the quick return to productive Torah learning. Despite the cyclical nature of the ongoing tsuris (hardships), the Jewish community worked around it and had a relatively quick recovery.

SL: The amazing ability of the Jews during the Crusades to continue learning and practicing their religion is perhaps only matched by the ultimate sacrifice of the many who gave up their lives al kiddush Hashem rather than convert to Christianity. How do you explain the remarkable strength these people had?
RK:  Not every Jew in Ashkenaz was a talmid chacham, but there was a tremendous fealty to Torah learning. There was also a deep, inborn faith—they were ma’aminim, bnei ma’aminim (believers, the children of believers)—and they staunchly believed that there is no life without Torah.

To be sure, there were Jews who converted due to the persecutions. I recently completed a soon-to-be-released book on the rabbinic approach to meshumadim shechazru, Jews who converted but later returned to the Jewish community. In Medieval Europe, one did not have many options. There were some Muslims, but for the most part, you could either be a Jew or a Christian. You could not be a “New Age” follower or a member of the Society for Ethical Culture. The vast majority of Jews were deeply entrenched in Torah life and were not interested in abandoning it.

SL: As mentioned, there are but a few Jewish accounts of the Crusades, such as the Sefer Hazechirah by Rabbi Ephraim of Bonn as well as kinot written to commemorate the events. How do they reflect this strength in the face of tragedy and suffering?
RK: Like other kinot, the main objective of these elegiac poems is to memorialize the murdered [during the Crusades] and commemorate their special characteristics. Av Harachamim, a prayer composed during the period of the Crusades to commemorate the tragedies, was added to the Shabbat morning service. Describing those who died “al kiddush Hashem,” it states: “mi’nesharim kalu umei’arayot gaveiru—they were lighter than eagles and their strength exceeded that of lions.” The nature of their devotion is also described in great detail in the Crusade Chronicles.

Also described in the Jewish and Christian chronicles of the Crusades are the extraordinary efforts Jews invested into saving their lives, especially during the First Crusade. They tried to save their community through exorbitant bribes, and they offered large payments to the overlords to help protect them in their castles and fortresses. In addition, they took up arms and donned armor to defend themselves. In fact, the chronicles seem to suggest that the lamdanim (the scholars) were specifically among those who did so.

Giving up one’s life al kiddush Hashem was a heroic last resort when all else failed and the mobs were upon them, confronting them with conversion to Christianity or death.

SL: What lessons can we take for our times?
RK: In his writing, Rabbeinu Tam mentions, en passant, I am having a great deal of trouble; I have a lot of responsibility with the malchut, the representatives of the rulers. However, he glosses over the issue as if to say, I had some difficulty here, but I took care of it between sedarim. That is an example of the resilient attitude of the Jews during that time—we have indeed suffered a terrible setback, but we move on.

Another theme in the kinot devoted to the Crusades is that of vengeance, specifically nikmat Hashem, God gathering the tears and the blood of the slain, and at the appropriate time, punishing those who were responsible. The kinot also refer to the midrashic theme of Mashiach wearing the poriphyon, a crimson garment modeled after the ketonet passim of Yosef. The red garment represents the blood of all the murdered Jews over the centuries. The connotation of the midrash is that no drop of blood will be forgotten, as it were, and the evil will ultimately be redressed.

While the Jewish communities in Northern France and Germany were mourning their losses and composing kinot, much of the vast literature of the Ba’alei HaTosafot was being created.

The fundamental idea is that we recognize that “nikmat dam avadecha hashafuch—revenge for the blood of your servants that was spilled,” will be left to Hakadosh Baruch Hu. We don’t understand the reason for tragedies. Our job is to commemorate and to remember, to carry on and to rededicate ourselves to living genuine, authentic Torah lives.

During a time of crisis or trauma, we need to remember that which has guided our people for millennia: “Ein lanu al mi lehisha’en ela al Avinu shebaShamayim—we have only our Father in Heaven on Whom to rely.”

Sholom Licht is a freelance writer living in Queens, New York. He received his BA from Bar-Ilan University and MA from the Bernard Revel Graduate School of Jewish Studies, and is currently a student at the University of Pennsylvania Carey Law School.

Jewish Resilience: Holding Strong in a Time of Crisis by Jacob J. Schacter

Plagues and Perseverance by Faigy Grunfeld

Life After the Holocaust: How They Rebuilt with Rabbi Berel Wein

Finding Light in the Darkness: The Art of Jewish Humor by Steve Lipman

The Ability to Bounce Back: The Psychology of Resilience by Shana Yocheved Schacter