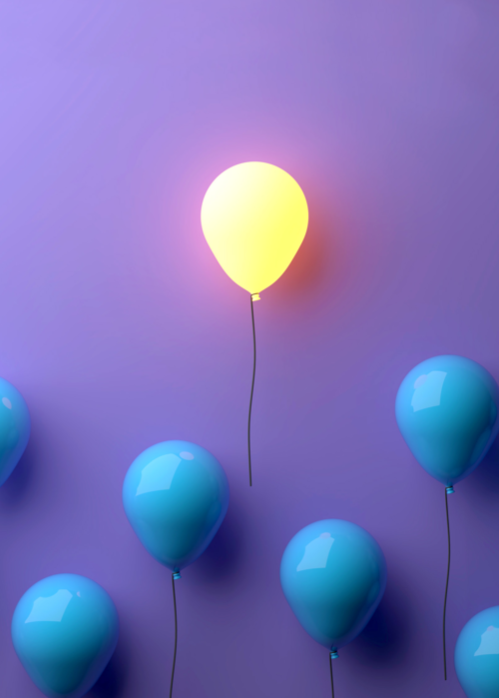 Who tells jokes about pogroms? Or about possible pogroms?

Any student of Jewish history knows the answer—Jews do. The victims of pogroms.

This is probably the most famous one:

The body of a murdered girl is found on the outskirts of a village in Eastern Europe. Before the victim’s identity can be confirmed, fear rises in the Jewish community.

When a child, a Christian child, disappears or is killed under mysterious circumstances, blood libel charges are sure to follow—the Jews need the blood of a non-Jewish boy or girl for their Passover matzahs. Then comes a “spontaneous” pogrom, the gentile population rising in armed, righteous indignation, killing Jews and destroying their property.

The village’s Jews gather one night in the basement of their synagogue, debating what to do if their neighbors seek to harm them.

Just then, the shul’s beadle rushes in, out of breath. “Rabbosai,” he shouts, “I have wonderful news. The murdered girl is Jewish!”

The “punchline” sounds sick, insensitive, even a bit anti-Semitic, but the moral of the joke is instructive: Humor is not out of bounds in Jewish history, even at the worst of times.

Jews need humor as much as we need things to complain about. In the last few months I’ve seen the most creative ways people have arranged to get their ‘shtick fix.’ I’ve been hired to ride for a few hours on a truck around Crown Heights, Brooklyn to perform on every block. I’ve even been hired by a school to be a guest in a seventh grade Zoom class to help with some comedy relief. I’ll bet laughter is more effective than Hydroxychloroquine. And the Jews have known this since the beginning.

As famed speaker, historian and author Rabbi Berel Wein would say about his stories, maybe this one did not actually take place, but it is true. At least its message is. The message: Jews have been able to bring the light of humor to even the darkest of times. We survive because we tell jokes, jokes that allow us to laugh even when tragedy, up to the point of death, threatens.

During the ongoing coronavirus crisis, humor like this is especially needed. And it has been forthcoming, especially from the Jewish community.

“Humor is the lingua franca of the Jewish people,” Hershey H. and Linda Weiser Friedman write in God Laughed: Sources of Jewish Humor (New York, 2014). “The Jewish people—oppressed throughout history, dispersed to all parts of the globe, for most of its history a disenfranchised minority in a hostile host country, the People of the Book, always needing to live by their wit—drew upon its traditions from the Scriptures, the Talmud, and the Midrash.”

We have more experience fending off threats from hostile neighbors than from deadly pathogens, but our historical memory of resilience is coming in useful these days.

There is no record of Jews telling jokes during the era of the Crusades, the Inquisition or the pogroms, but knowing Jewish character, there is no reason to think that some Jews failed to employ humor as an escape, a respite, a spiritual weapon. The seventy years of anti-Semitic Communism in the Soviet Union and its Iron Curtain satellites produced a flood of anti-regime, pro-Semitic humor. This brand of humor, David Harris wrote in The Jokes of Oppression: The Humor of Soviet Jews (New Jersey, 1988), “was embraced by Russians, Ukrainians, and Georgians, among others, as the ultimate expression of discontent with the status quo . . . when Russians or Jews or Armenians meet together, it never takes long before they start exchanging the latest Jewish or other political jokes.”

A policeman sees Feinblatt sitting on a bench in a Moscow park, reading a Hebrew newspaper.

“What are you doing, reading a newspaper in that accursed Jewish language?” the policeman barks.

“I want to be prepared for when I die and go heaven,” Feinblatt answers.

There is ample evidence that Jews used a similar brand of humor during the Shoah; I know, because I wrote a book about it, doing voluminous research, interviewing Holocaust survivors, and reading countless jokes and funny stories that emerged from that dark period, created by Jews of every religious orientation.

Chaya Ostrower, in her groundbreaking It Kept Us Alive: Humor in the Holocaust (Yad Vashem, 2014), which features interviews with many survivors of the Shoah, writes that “the participants said such things to me as, ‘Yes, there were even jokes, a lot of them, and that’s what helped us to endure.’”

Menachem Rosensaft, a prominent member of the Second Generation of children of survivors, tells of the time that his father, Josef, and two other Auschwitz inmates were betrayed shortly before they put into action a secret plan to escape the Nazi death camp. It was a Thursday; the death penalty in Auschwitz was carried out on Mondays. The three Jews were locked in a small room in Block 11, to meet their fate in four days. “We’re going to be here for a long time,” Josef Rosensaft told his fellow conspirators. “Somebody should have brought a deck of cards.”

Josef Rosensaft survived the Holocaust, due in part to his never-say-die attitude.

While researching my book several years ago, I mentioned the topic to a senior citizen, a Holocaust survivor, who worked in a Jewish bookstore in Manhattan. I feared he might be offended by what I was doing. On the contrary, he was fascinated. “We told lots of jokes” while attempting to come out of the Final Solution alive, he said.

Jokes, one may say, are frivolous, fluff. Piety may dictate that for a Jew, levity after the Churban of the Second Temple, at least excess levity, is forbidden. 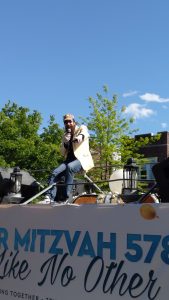 In the Jewish tradition of drawing upon humor in tough times, during Covid sheltering, comedians performed for audiences outside. Seen here, Mendy Pellin performing on a truck at an outdoor “Covid Bar Mitzvah” in May. Photo: Sholom Brummel

That overlooks why humor is so natural to us; God creates the cure before He creates the disease. The world is full is full of existential “diseases”—poverty, discrimination, death, and most recently, an actual disease, the plague of Covid-19. The cure, indigenous to our DNA, is humor. Jews, who have survived millennia of life-and-death challenges, have developed a unique coping mechanism. While humor appears at first glance to be a secular expression, it is, in a counter-intuitive way, among the highest forms of faith—it shows that we, at least some of us, will survive; that better days are ahead, that we are not without hope.

I learned this several years ago when a Jewish historical organization in New York City asked me to give a Kristallnacht speech on “humor and genocide.” I had spoken many times on humor and the Shoah, but had never expanded my scope to the atrocities suffered by other people. This should be easy, I thought; I would go through my home library of various genocides—Armenia, Cambodia, Rwanda—and search in the index and the text for those groups’ examples of such coping humor.

Nothing came up. Absolutely nothing. I called someone I knew who worked for a local Armenian organization and told him what I had found. Or had not found.

There is no parallel humor from the Armenian Genocide. “It was too recent, a century ago,” he said. “We are still traumatized.”

Other nations do not have this “luxury.”

The type of humor that commonly is identified as “Jewish humor” now—biting, mocking, intellectual—is partly reactive, partly proactive, and usually refers to the humor of Eastern Europe (Poland, Ukraine, Russia), where the majority of the Jewish people lived. In this country a new medium of humor developed. The Borsch Belt tummler, the vaudeville wise guy, the stand-up comic—all motivated by a common minority status, and a desire to succeed.

For a people long without a country of their own, a standing army or political strength, humor served as a means of self-assertion, of maintaining sanity and unity. “As a rule,” Rabbi Joseph Telushkin wrote in Jewish Humor: What the Best Jewish Jokes Say about the Jews (New York, 1992), “Jews have joked about anti-Semitism when they were too weak to fight it.”

Humor is the last laugh, a way to outsmart the authorities, a means to preserve life:

A Jew in Russia falls into a lake. Not knowing how to swim, he frantically screams, “Help, save me!”

But his calls are totally ignored by all present, including a number of soldiers standing nearby.

In desperation, the Jew yells out, “Down with the czar!” Then the soldiers immediately jump in, yank the Jew out of the water, and haul him off to prison.

The czar is long gone. But the lessons of that era’s coping humor remain.

Covid-19 took its toll in the Jewish community, killing many men and women. Was it too soon to make jokes?

This phenomenon of Jews turning to humor during times of crisis has been particularly true in the Covid-19 era. The Internet is full of it. Memes. YouTube videos. Essays.

The start of the pandemic coincided with Pesach, which inspired much yom tov-themed humor.

David Kilimnick, an Orthodox rabbi’s son from Rochester, New York who’s now a leader of the stand-up comedy world in Jerusalem, offered “Jewish Advice for Being at Home” during self-isolation.

Kilimnick described “spring cleaning” under quarantine: “This year, you actually have time to clean for Pesach. Passover cleaning will be done and the house will be as clean as the hotel you stayed at last Pesach. Tell the children it’s a mitzvah. Telling them they’re cleaning for Passover and [that] it’s a commandment is the best way to get them involved in spring cleaning. Tell them that they have to get rid of chametz, and that includes raking the leaves.”

Also circulating was an updated version of the fifteen steps of the Seder where “urchatz,” the ritual cleaning of one’s hands, came after every step of the Seder; a coronavirus form of Seder night Bingo included, “Leave Elijah’s cup six feet from the door”; and several coronavirus Haggadot made the rounds, with the most widely read one written by Martin Bodek, an IT specialist who lives in Passaic, New Jersey. Bodek’s The Coronavirus Haggadah featured a new version of the Four Questions:

1. Does anyone really need to ask why this night is different from all other nights?

2. Do you not see what’s been happening all around you?

Does humor like this vanquish a plague or a physical enemy? No. But it makes life more pleasant, more bearable in the interim. It gives a people hope. It bolsters our morale and strengthens our resilience. The worse the times, the more we need it.

And that is no laughing matter.

Steve Lipman, a regular contributor to Jewish Action, is the author of
Laughter in Hell: The Use of Humor During the Holocaust (New Jersey, 1991).

Jewish Resilience: Holding Strong in a Time of Crisis by Jacob J. Schacter

Crusades and Crisis by Sholom Licht

Plagues and Perseverance by Faigy Grunfeld

Life After the Holocaust: How They Rebuilt with Rabbi Berel Wein

The Ability to Bounce Back: The Psychology of Resilience by Shana Yocheved Schacter