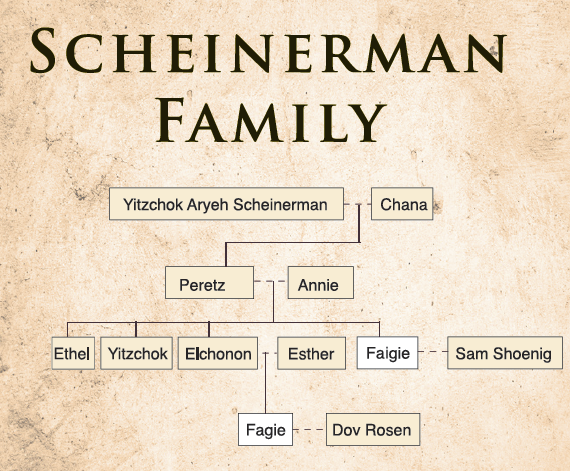 Yitzchok Aryeh Scheinerman emigrated from Russia in the 1880s and later brought his wife, Chana, and the rest of his family. His son, Peretz, married Annie (Sapp) in 1908. The couple moved to Washington, DC, where Peretz opened a dry-goods business. Realizing their growing family’s need for a Torah environment, they moved to Manhattan’s Lower East Side. They had nine children.

When my parents, Peretz and Annie Scheinerman, lived in Washington, DC [in the early part of the twentieth century], you could just walk onto the White House grounds. There were these beautiful green rolling hills where my brothers and their friends used to play ball. One time a man was standing on the porch of the White House, watching my brothers play. One of my brothers ran to catch a ball and stopped to pick up his yarmulke and put it back on his head. The man walked over; it was President Calvin Coolidge. He said, “It’s nice to see boys keeping their religion.” It was a different world.

My father sold men’s overalls and did very well until the Wall Street Crash of 1929. After the Crash, he lost his business; everyone lost their businesses then. My father had loans to pay off. He thought, “What am I doing in Washington, DC? I don’t have chinuch for my children; I don’t have a business.” He decided to move the family to the Lower East Side. But he had to finish paying off his debts. It was not easy. He would work in Washington all week long and only come home for Shabbos. He would take the B & O (Baltimore and Ohio) Railroad, then a ferry from Hoboken to New York and finally, a trolley. We never had a car. We took trains and buses and the trolley, which cost three cents. My mother had to be very strong, which she was. During the Depression years, I never knew we were poor. Only when I was older did I realize the sacrifices my parents made.

I loved the Lower East Side. There were a lot of Italian Americans and Irish Americans in the neighborhood. We all got along well. People respected my parents because they held onto their beliefs no matter what. Once there was a Christmas play in school and I was supposed to have a role. My mother was a gentle, quiet woman, but not when it came to Yiddishkeit. She marched to the school and told the teacher, “My child cannot be in the play.”

Our parents instilled in us menschlichkeit and Yiddishkeit. They made it special to be a frum Jew.

When we lived on the Lower East Side, we didn’t have a phone. We would go to the candy store whenever we had to make a call.

When I was thirteen years old, we moved to Williamsburg. My sisters and I would walk across the Williamsburg Bridge every day to Seward Park High School, which had a handful of frum students. On Shabbos, my public school friends would see me and say, “Can’t you go to the movies today?” My mother would say, “No, Shabbos is Shabbos; we don’t go to the movies. No Jewish children should go to the movies.” Some of the girls thought they were pretty frum. Their homes were strictly kosher, but their fathers worked on Shabbos. Eventually they started coming to my house on Shabbos. My mother would give them nosh; it was like having a Bnos [a Shabbos youth group].

After I graduated high school, I got a job as a secretary in a Manhattan office. There were a lot of Jews working there, but they were very Americanized and barely religious. I used to say to myself all the time: “Remember who you are; remember what you are.”

[In the 1930s] Rebbetzin Vichna Kaplan came to America and started a seminary class for working girls who had never attended Bais Yaakov. I went to a class. It blew my mind; I remember everything that I learned there.

We are seventh-generation Americans with lots of children, beli ayin hara, named after my parents and my bubbes and zaydes. I am thankful to Hashem for all the goodness He has bestowed upon me.

My paternal grandparents, Peretz and Annie Scheinerman, had emunah. They taught their children and grandchildren Yiddishkeit by living it.

There’s a story told in the family: An irreligious man who was friendly with my grandfather bet on a horse and told him if the horse won the race, he’d split the winnings with him. The horse won. When the man came to Peretz prepared to give him half of the money, Peretz asked him when he had bet on the horse. The man told Peretz he placed the bet on Saturday. Peretz told him he couldn’t take the money. My grandparents certainly could have used the money. Life wasn’t easy for them, but I think of them as the richest people in the world to have had such integrity.

When they lived in Washington, DC, the only available mikvah was in Baltimore. Today you can get from Washington to Baltimore in forty-five minutes. In those days it could take hours, but my grandmother made the journey. If for some reason she couldn’t travel to Baltimore, my grandmother would immerse in the Potomac River in Washington, even if she had to break ice to do so. That is how committed she was to halachah.

Since there were no Jewish schools, my grandparents “imported rebbes”—they would bring over teachers from Europe who would live with the family and teach the boys and the girls. That is how they gave their children a Jewish education.

My grandparents knew Rabbi Yaakov Yosef Herman [featured in the book All For The Boss], who told them that if they didn’t send my father Chunie [Elchonon] to Europe to learn, they would lose him. My father was an American kid—he played baseball, and he didn’t know how to learn when he was a young teenager. My zayde was working, so he couldn’t really teach him. My grandparents waited until my father was around fifteen and in 1934, they sent him to the Mirrer Yeshiva.

For my father, being sent to the Mir was like going straight from elementary school to Harvard. He didn’t have the skills to learn. The roshei yeshivah at the Mir sent him to Rabbi Elchonon Wasserman who had a mechinah in the famous Ohel Torah Yeshiva of Baranovitch, in White Russia. My father learned at Baranovitch for a year and a half, and then returned to the Mir to learn for the next four years.

When the war seemed imminent, my grandparents sent him a ticket to come home. Figuring that as an American he could always come home, my father gave the ticket to someone else. When my grandfather discovered this, it was close to Shabbos. He went to the Noviminsker Rebbe to ask him what to do. The rav said, “It’s pikuach nefesh; get him another ticket right away.” On Shabbos, my aunt Ethel walked over the Williamsburg Bridge to the Western Union store located on the Lower East Side to send her brother Chunie the money for another ticket. My father made it home, thank God. Before he left, he asked his roshei yeshivah what he should do to ensure that his future family stays frum in America. They told him: “Never look for kulos [leniencies].”

When my younger uncles came of age, they were sent to Telshe Yeshiva in Cleveland. One of my uncles, Uncle Itzie, now Rabbi Yitzchok Scheinerman, stayed in Telshe to learn and is still there.

At the time of my grandmother Annie’s passing in 1984 at the age of ninety-six, she had many, many children and great-grandchildren, all of whom are shomer Shabbos. 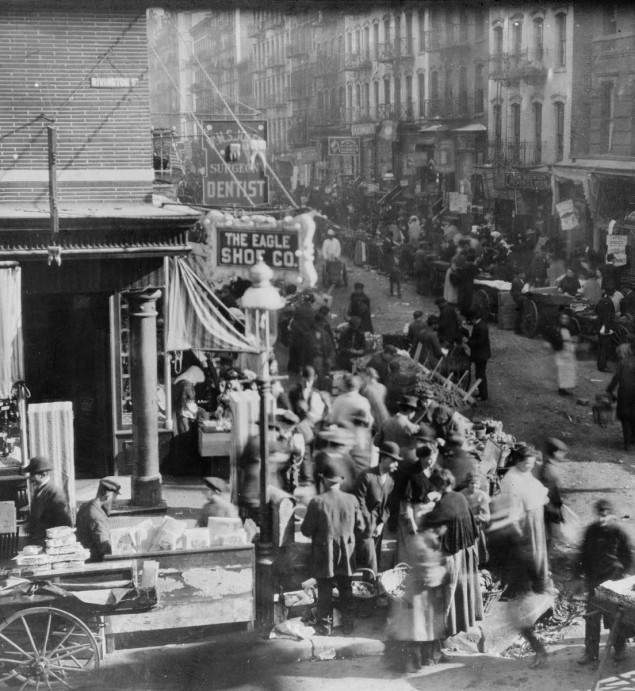 Sunday morning crowds fill the market at Orchard and Rivington in New York City, 1915. Courtesy of the Library of Congress, Prints and Photographs Division

4 2 votes
Article Rating
This article was featured in the Spring 2016 issue of Jewish Action.