Mordechai (Max) Hartman was a young boy when he came to America with his parents in the late 1800s. When he married, he and his wife, Gittel (Gussie), were determined to preserve their way of life despite the pressure to assimilate.

When I was growing up, small farms still existed in Boro Park. I remember there were goats and chickens. It was a time when the majority of Jewish immigrants assimilated. Observant Judaism was perceived as being old fashioned, a relic from the Old Country.

Boro Park had these big shuls where the great chazzanim of those days used to daven. In the first half of the twentieth century, many of the congregants were not shomer Shabbos; they would daven at the Shabbos morning minyan and then go to work. This was a very common phenomenon. In their own minds these Jews felt that they were devout.

My maternal grandfather, Mordechai (Max) Hartman, and his buddies felt that this was terribly wrong. Shomer Shabbos meant shomer Shabbos, no matter what the sacrifice. He used to tell us about people he knew who had to get a new job every week in order to not work on Shabbos. Max felt they should have gone into business for themselves, which is what he did. He worked for a leather company and then opened his own leather business.

Max and his friends decided to form a shul, which they called Congregation Shomrei Shabbos. In order to become a member, you had to be 100 percent shomer Shabbos. I remember when I was six or seven years old, sitting with my grandfather while he and the shul board members discussed how to ascertain if a member was truly frum. Did the individual keep his store closed on Shabbos? Where did he buy his meat? They would have debates—should we let this person in? His store is closed on Shabbos, but he carries his packages to shul.

Today the shul is known colloquially as the “Shomrei Shabbos Shtiebel,” and there are minyanim every fifteen minutes throughout the day. There’s a plaque in the shul acknowledging all that my grandfather did for the congregation. This was one of my grandfather’s contributions to American Judaism.

My grandfather was not a particularly learned man, yet his dedication [to Yiddishkeit] came from his upbringing. He not only kept Shabbos, he insisted that we sing every single zemir in the siddur. My grandfather was stubborn in the best sense, akshanut d’kedushah—a holy stubbornness.

My grandparents were very Americanized, yet very religious. Despite the fact that my grandmother, Gussie, had no secular or Jewish education, she was very well read. She read everything in Yiddish translation, even Jules Verne novels and other classics. Around 1921, Gussie was one of the first women to become a licensed automobile driver in Brooklyn. She was the chairman of the Ladies Auxiliary at the shul. She probably was the mikvah lady as well. Boro Park had one mikvah then, and women would come from all over Brooklyn to use it. She also went to shul every single Shabbos when her health allowed her to do so.

My paternal grandfather, Chaim Yitzchok Weinreb, represented a different kind of commitment. He was a talmid chacham, a chassid who learned Shas many times. When he was in Galicia, Poland, he was the disciple and later, the personal secretary of the famed halachic authority of the early 1900s, Rabbi Sholom Mordechai Schwadron, known as the Maharsham. He received semichah from Rabbi Schwadron as well.

In Poland, Chaim Yitzchok had been destitute. At some point, he was offered the chance to become the shochet, mohel and teacher in Batavia, a town in upstate New York where an entire shtetl of Jews had emigrated en masse after a brutal pogrom. My grandfather didn’t want to go to America; he worried about his children remaining frum. The Chortkover Rebbe gave him a berachah that his children would remain frum.

He and his wife, Miriam, raised four sons and a daughter in Batavia. As soon as their sons turned eleven or twelve, they sent them to various yeshivot to study; some attended Yeshiva Torah Vodaath in Brooklyn.

Most of the family throughout the generations remained frum. The secret, as I see it, was Shabbos, taharas hamishpachah and the home. What both sets of grandparents had in common was that the home was a vibrant place for Yiddishkeit. Everyone felt part of it. 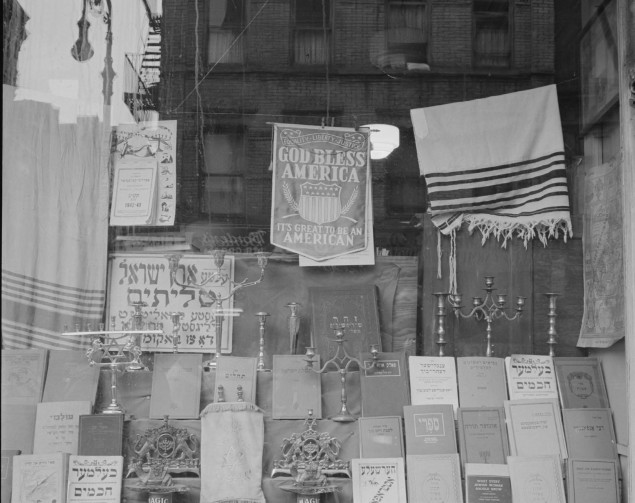 A Judaica shop on Broome Street, New York, 1942. Courtesy of the Library of Congress, Prints and Photographs Division