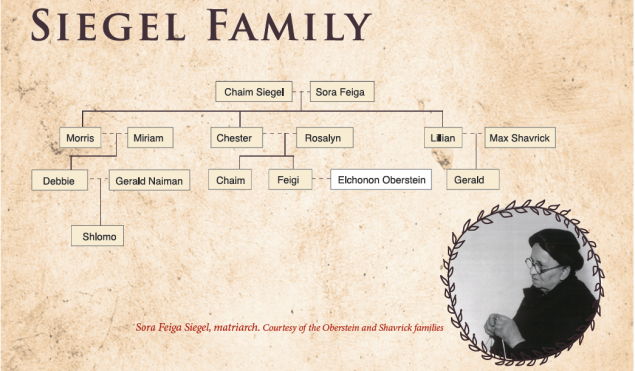 In the 1890s, Chaim and Sora Feiga Siegel left a life of poverty and anti-Semitism in Ponevezh, Lithuania, for the promise of a better future in America. Their first stop was Boston, Massachusetts. Upon hearing that Baltimore was in those days the “Yerushalayim of America,” they promptly headed south. The Siegel descendants were at the forefront of building the Torah infrastructure in Baltimore’s Jewish community. Chaim and Sora Feiga raised eight children, almost all of whom who not only remained true to Torah and mitzvot, but also influenced generations to do the same.

By Rabbi Elchonon Oberstein (husband of Feigi, the daughter of Chester Siegel). The author would like to thank Gerald Shavrick, who provided much of the information about his uncles Morris and Chester Siegel.

My wife’s paternal grandparents, Chaim and Sora Feiga Siegel, moved to Baltimore in 1900. The couple named their second American-born son after Chaim’s father, Yechezkel. But the midwife refused to put Yechezkel on his birth certificate. She said she would not burden an American boy with such a foreign name. One of his sisters solved the dilemma. A street in East Baltimore that she crossed on the way home from school was called Chester Street. It sounded a little like “Chezkel,” so that is how he got the name.

The poverty in East Baltimore, where most of the Jews lived at the time, was great; Chaim eked out a living selling chickens—he was a shochet and a butcher. Later, he started a hosiery company called the Hyman Siegel Hoisery Company. When he passed away in 1935, my wife’s father, Chester, and her uncle Morris took over the business.

Even though the level of shemirat hamitzvot in Baltimore was pretty high in those days, shemirat Shabbat was a constant struggle. The Siegels were determined to adhere to strict observance even if all around them others were abandoning Shabbat observance. Little Chester went to public school in the day and the Hebrew Parochial School after school. The Hebrew Parochial School, later named Talmudical Academy (TA), opened in 1917 with six students in a second-floor apartment. It was the third Jewish day school in the United States and the only one outside of New York City. Until TA opened, the Siegel children went to public school and were taught limudei kodesh privately.

In 1918, Baltimore was home to some 65,000 Jews. However, Chester, his brothers and sisters and the other frum boys and girls in East Baltimore were distressed to see how many of their contemporaries were leaving Torah observance. They founded a club called the Adas Bnei Israel. It was a place where their friends got together for shiurim and socializing. Morris led the youth groups, which included some members who later became roshei yeshivah, such as Rabbi Aharon Feldman, Rabbi Avigdor Miller, zt”l and Rabbi Mordechai Gifter, zt”l. The Siegels organized the Adas to encourage other young people to keep Shabbat. They wore pins on their lapels that read: “Judaism in general; Shabbat in particular.” During the Depression years, under the leadership of Morris, the Adas organized a job bureau so that people could get jobs that wouldn’t require them to work on Shabbat. 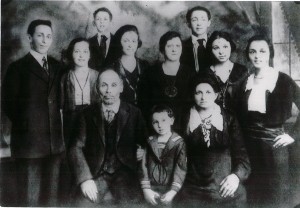 Three generations of the Siegel family, builders of Baltimore’s Orthodox Jewish community. Top, from left: Morris, Chester and Daniel Siegel. Morris and Chester were particularly active in the leadership of the Adas Bnei Israel club (later shul). Middle: The five Siegel daughters, Lillian, Anna, Evelyn, Lena, and Rose. Bottom: Chaim Siegel, patriarch, and his wife, Sora Feiga, with their grandson Gerald Semer, son of their daughter Evelyn (standing directly above her son). Courtesy of the Oberstein and Shavrick families

Adas Bnei Israel eventually became a shul in East Baltimore around 1920. My wife’s father gave shiurim in the shul. It is still a functioning shul in Baltimore, and today, the rabbi of the shul is Rabbi Shlomo Naiman, a descendant of Chaim Siegel.

Chester met his future wife, Rosalyn Weinstein, at the Adas. A teenager, she was visiting from Altoona, Pennsylvania and was overwhelmed to see so many frum young people. They were married outside of the Adas.

The couple was childless for eighteen years before Rosalyn became pregnant. The Ladies Auxiliary of Ner Israel Rabbinical College threw her a baby shower. Years later, the mashgiach of Ner Israel, Rav Dovid Kronglass, zt”l, told me that he couldn’t understand this strange American minhag to give a woman a shower before she gave birth. Unfortunately, when Rosalyn went into the hospital to have a C-section, the nurse gave her medicine intended for another patient and it killed the fetus.

Nothing shows the righteousness of this couple more than that they accepted the decree with emunah shleimah (complete faith). Not long afterward, the Siegels were blessed with two children, my wife, Feigi, and subsequently, her brother, Chaim.

Chester and Rosalyn were exemplars of the kind of ba’alei batim who built Baltimore and laid the foundations of everything we have today. Generations of Baltimoreans have told me over the years how much of their Yiddishkeit they owe to the Siegel family. Thousands of frum Jews exist today because their great-grandparents were influenced by the Adas way back in the olden days in East Baltimore.

There’s a cemetery on the outskirts of Baltimore where most of the Siegel relatives who have passed on are buried. There are many hundreds of descendants in the US, Israel and Canada who live their lives according to the values exemplified by Chaim and Sora Feiga Siegel.

Listen to Rabbi Elchonon Oberstein discuss how the Siegels built the Orthodox community of Baltimore at www.ou.org/life/community/savitsky_oberstein/.

3 1 vote
Article Rating
This article was featured in the Spring 2016 issue of Jewish Action.