Har Bracha is located in the Shomron, atop the more southerly of Mount Gerizim’s twin summits. Courtesy of Mazkirut Har Bracha (facebook.com/Har.Bracha)

There are many words that come to mind when describing Jewish communities deep within the Shomron; “pragmatic” is not one of them. Yet Har Bracha, more than any other yishuv and perhaps more than any other community in Israel, is the product of an attempt to translate a particular vision of Torah-centered communal life into a holistic plan that encompasses practicalities like economic self-sufficiency, higher education, commuting distances and the costs of housing and day care. And that plan is becoming a reality.

Har Bracha draws its name from a verse in the Torah: “When the Lord, your God, brings you into the land you are entering, in order to possess it, pronounce the blessing on Mount Gerizim. . .” (Devarim 11:29). The community is indeed located atop the more southerly of Mount Gerizim’s twin summits, the more northerly of which overlooks the city of Shechem and faces Mount Ebal, Gerizim’s counterpart. Access to Har Bracha is via Route 60, which roughly tracks the ancient road from Hevron to Shechem along Israel’s central ridge—the road taken by Avraham on his way to sacrifice Yitzchak, and by Yosef seeking his brothers at Yaakov’s request. Just before the turnoff to Har Bracha, the road runs through the Arab town of Huwara.

Har Bracha was founded at the site of a Nahal Brigade military outpost in 1982, but when Yonaton and Jackie Behar moved there just as the First Intifada began in late 1987, they were only the thirteenth family to join the community. The community was then seeking a rabbi, and Yonaton recommended one of his teachers from the yeshivah in Beit El: Rabbi Eliezer Melamed. Behar recalls that when Rabbi Melamed first visited, he said, “I think I can come up with many chiddushim here.” At the time, Behar thought that Rabbi Melamed was referring to Talmudic novellae, but now realizes that Rabbi Melamed was dreaming of what Behar calls “communal chiddushim,” innovative ways to build a great community. Har Bracha elected Rabbi Melamed as its rabbi, and in the generation since, it has become an expression of his vision of a Torah-centered community. No mere ornament or figurehead, Rabbi Melamed is the cornerstone of this community and the reason for its success.

Another milestone occurred in 1992 with the founding of Yeshivat Har Bracha under Rabbi Melamed’s leadership. It is a hesder yeshivah, which combines Torah study with military service in a five-year program. Its curriculum focuses on the study of halachah from its sources in the Talmud through to practical application. Rabbi Melamed, after all, is the author of Peninei Halachah, a sixteen-volume (so far) contemporary halachic code that has sold close to a million books and is fast becoming the Religious Zionist Shulchan Aruch (full disclosure: this author is the general editor of the English Peninei Halachah series, of which five volumes have appeared). Emphasis on applied halachah in yeshivot is not unprecedented, but few contemporary yeshivot emphasize this sort of study.

Another unique element of the yeshivah is a program called Shiluvim, which offers housing to single and married students at Ariel University—about twenty minutes away by car—while the students in turn commit to at least fifteen weekly hours of Torah study at Yeshivat Har Bracha. Many alumni of the yeshivah’s hesder program stay in the community they have grown to love while they attend university, begin their professional training and start families. Many graduates of the Shiluvim program later choose to settle permanently in Har Bracha, and the program has fueled the community’s rapid growth over the past decade. The yeshivah and the community have thus developed a mutually beneficial relationship: the yeshivah’s Shiluvim program attracts new young families, while the community models the lifestyle to which the yeshivah wants its students to aspire.

Both of these unique aspects of Yeshivat Har Bracha reflect Rabbi Melamed’s vision and innovative approach to yeshivah study and community building—namely, the fact that he views them as two sides of the same coin. Torah study is not disconnected from life or a retreat from the world. Rather, it is the central organizing principle of all facets of life. Rabbi Melamed, in fact, discourages full-time yeshivah study after a few years unless one is planning a career in the rabbinate or education. One must learn to make Torah central to his or her life even while pursuing a career. Thus, Har Bracha has a significant number of computer programmers, nurses, engineers and lawyers (as well as a fair share of rabbis and educators). Its residents work in media (especially outlets related to Arutz Sheva), local government and security. There is a local boutique winery, and each year a group of American Christian Zionists comes to help with the grape harvest, in accordance with their understanding of certain Biblical prophecies. But Har Bracha’s biggest export is Torah, primarily through the vehicle of Peninei Halachah and Rabbi Melamed’s other writings. Residents working in all these professions aspire to keep Torah at the center of their lives by engaging in regular Torah study and by conducting themselves according to its guidance in their professional careers.

Avraham Herman is a native of Allentown, Pennsylvania, who grew up in Elizabeth, New Jersey. He and his wife, Nomi, a Teaneck native, are among the few relatively recent olim who live in Har Bracha (though there is a sizeable number of residents who made aliyah as children or whose parents are English-speaking olim). A patent attorney by trade and a marathoner, unicyclist and home brewer by passion, Herman says that Har Bracha’s professional diversity is no accident: “The goal of Torah study is the full expression of Torah in all facets of life, including professional and communal life. Community itself should be an actual physical manifestation of a Torah way of life. This vision requires people in all sorts of professions bringing Torah to more areas of human experience.”

On Shabbat especially, there is a strong emphasis on devoting considerable time to Torah study. One of Rabbi Melamed’s refrains is that Shabbat must be the spiritual anchor of the week, and he therefore urges people to spend six hours learning Torah over Shabbat. In Har Bracha, there are about thirty shiurim available to men and women each Shabbat. The highlight is Rabbi Melamed’s Shabbat afternoon derashah. The vast majority of Har Bracha’s adult population attends this hour-long lecture which, harking back to the heyday of Shabbat discourses, weaves together observations on the parashah, halachic instruction, practical wisdom, stories, humor and commentary on current events. 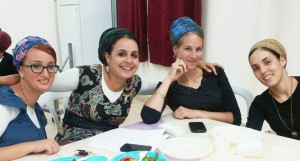 Women at an event in Har Bracha. Courtesy of Mazkirut Har Bracha (facebook.com/Har.Bracha)

A commonsense, holistic approach pervades many aspects of communal life. Shalev Cayam, who moved to Israel with his family at age twelve, studied at Yeshivat Har Bracha and now serves as Har Bracha’s general secretary, says, “A goal of this community is to make raising happy, healthy and well-educated children cost-effective.” Day care, preschool and extracurricular programs can be prohibitively expensive; Cayam’s office, as part of its service to the community, leverages economies of scale and negotiates directly with providers, thereby cutting out layers of overhead and reducing costs by up to 40 percent. Instead of tendering construction companies to build and sell homes, Cayam’s office deals directly with contractors for construction projects. Thus, even by Shomron standards, housing in Har Bracha is quite inexpensive.

Here too, Rabbi Melamed’s influence is felt. He stresses the laws and values of tzedakah, but within a larger context of money management and long-term savings and investment. While most rabbis in the Shomron maintain, for halachic and ideological reasons, that only Jewish labor may be used in the construction of homes, Rabbi Melamed recently ruled that Arab labor may be used: it is more abundant, cheaper and it furthers the overall goal of Jewish settlement of the Land of Israel. Torah, economics, community-building and yishuv Eretz Yisrael all come together as a whole.

It is worth noting that the Arab laborers building homes in Har Bracha are transported to work from afar. Local Arabs would be stigmatized within their communities if it became known that they build Jewish homes in the Shomron. This state of affairs is reflective of the larger relationship—or lack thereof—between residents of Har Bracha and their Arab neighbors. The most common interactions center around security incidents, and in Har Bracha, such incidents are rare.

There is a fascinating exception to this rule, though: the Samaritans. This community is the remnant of what rabbinic literature calls the “Kutim,” the amalgam of Israelite and foreign tribes that practice a religion similar to Judaism, and which experienced its heyday during the early part of the Second Temple era. About half of today’s Samaritan community, numbering less than 500 people, live in a village on Mount Gerizim, just to the north of Har Bracha. This community still offers a paschal sacrifice, an event that has become something of a tourist attraction for Israelis.

The aggregate result of the implementation of the various elements of the vision for Har Bracha is a community that has experienced double-digit population growth—the highest within its regional council—each year for the past decade, by attracting new families and having about a hundred babies each year. Its population now exceeds 2,000, in 330 households. And there is no slowing down. The dream is for Har Bracha to become a town and then a city. True to its name, it is indeed becoming a mountain of blessing.

Rabbi Elli Fischer is a writer and translator living in Modi’in.