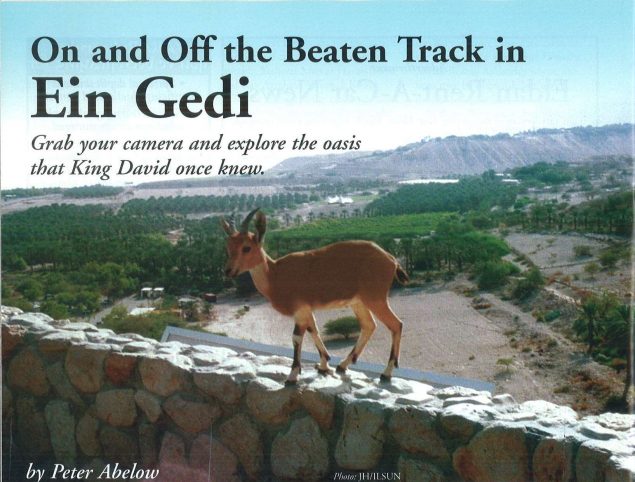 Chances are that many readers of Jewish Action have visited the beautiful Ein Gedi Nature Reserve at least once. Go one more time! But this time, in addition to your hats, canteens and towels, take a Tanach.

There are two ways to enter the Ein Gedi Reserve. The northern entrance is called Nachal David (David’s Stream) and the second is Nachal Arugot. The very names, Nachal David, and Mt. Yis

hai (as in David ben Yishai), which looms over the easy trail following the stream bed, give our first clues to the history beneath our feet. We quickly become aware of further evidence when we see the natural caves on the opposite side of the stream and, if we are lucky, some of the many ibex (a good word for Scrabble enthusiasts, the animal resembles a mountain goat and is called yael in Hebrew) who call the reserve home.

This is the time to sit in the shade on one of the benches along the path and open up your Tanach to the section which begins with Samuel I, 23:24 and continues till 24: 23. We learn of a frantic King Saul who is in pursuit of  David. The young man has escaped from the nearby Wilderness of  Maon (look at a map modern Israel) and taken refuge in the one of the caves of Ein Gedi. The king, accompanied by 3,000 “chosen men of Israel,” pursues David “on the rocks of the ibex.” What follows is one of the most poignant scenes in Tanach.  Can you imagine a more powerful experience for your children than to be reading these verses with you in Ein Gedi, gazing at the caves David knew, with the descendants of those very ibex roaming before their eyes? And before you leave this spot, be sure to retell the famous midrash of how a spider saved David in the cave. 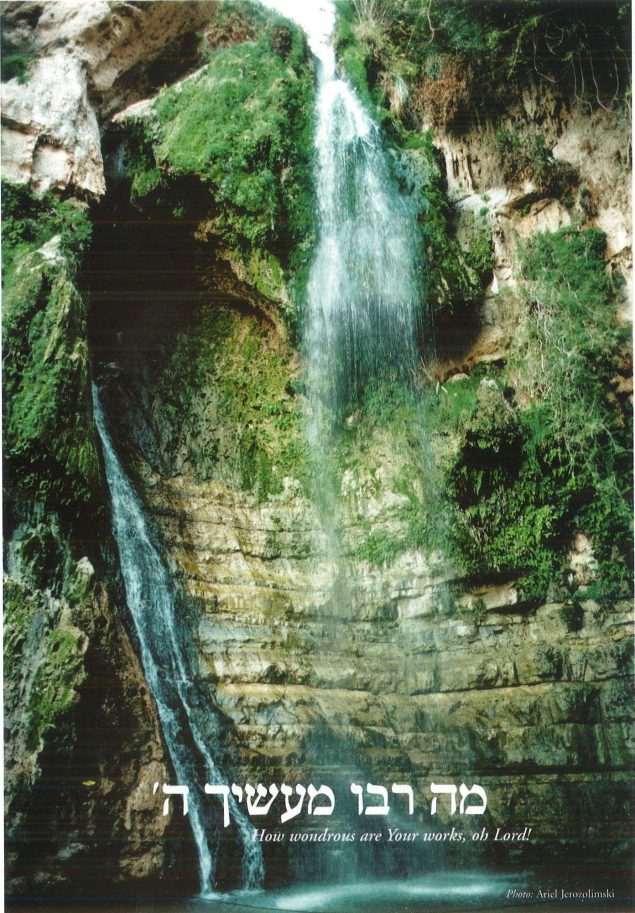 Now, having rested for awhile, we are ready to proceed to one of Israel’s most remarkable and beautiful sights, a series of pools and waterfalls in this true oasis, right in the heart of the desert. Take the right fork in the trail, but as you do, stand quietly for a moment to hear Ein Gedi — the powerful sound of rushing water. Then, as you proceed up the trail, keep your eyes open for another of the reserve’s native inhabitants, the shafan selah or hyrax (another great Scrabble word). These little brown, furry creatures measure between 10-20 inches and resemble ground hogs, though they are actually most closely related genetically to the elephant. They are hard to spot because they easily blend into the landscape, but if your eyes are sharp, you will invariably see a few sitting on boulders, guarding their dens, or playfully scampering on the rocks.

Feel free to leave the trail to splash in one of the pools or stand under a waterfall, but don’t forget that this amazing sight is in the middle of a desert. (This is a good spot to teach your children the meaning of the expression, “Mah rabu ma’asecha Hashem:  how wondrous are Your works, oh Lord!”) The loop trail will take you past the Shulamit Falls at the western end of the canyon and then back to the parking area. It involves about 100 steps and should take close to an hour. 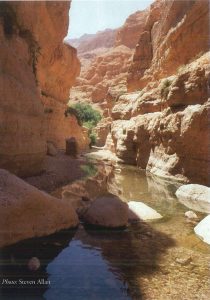 For the more adventurous, there is a side trail along the return path on the southern side of the stream which ascends to the Shulamit Spring and the Dudim Cave. This hike involves a fairly steep climb and some sections which are negotiated with the assistance of hand holds secured in the rocks. It is definitely not for families with younger children or for those with a fear of heights — but teens love it.  After a steady climb, the trail forks. Continue straight. The trail now begins to descend towards the cave and pools, culminating in a short climb down a rock face (with hand and foot holds) to a hidden pool. The views along this trail are spectacular and the reward at the end is well worth the effort. This hike, as well as any of the other hiking options within the reserve, should be coordinated in advance with the Rangers at the entrance. They will give you vital information about the trail and will advise you on how much drinking water you must carry.

The largest waterfall and pool in Ein Gedi is in Nachal Arugot. The entrance road is located just a few hundred meters south of Nachal David. This trail is much longer and more exposed to the beating sun than Nachal David, so hats and water are a must. Allow at least two hours for the round trip.  But once again, the reward is magnificent.  Because the pool is less accessible and entails a long hike, you are much more likely to be alone and be able to swim privately.

No matter what your scenic choice in Ein Gedi, don’t miss the nearby beautiful mosaic floor from a Talmudic-period synagogue. It is located under the large white tent between Nachal David and Nachal Arugot. Ask for the descriptive brochure which explains the artistic motif as well as the inscriptions in the floor.

Ein Gedi is only 15 minutes from Masada and directly across from the Dead Sea, so a trip to the area can become a full-day adventure. Enjoy!

Peter Abelow was a Jewish educator in the United States for more than 20 years before making aliyah with his family in 1990. He is now a licensed tour guide, specializing in family and group tours that make Israel come alive “Jewishly.”